Today we welcome Caroline Bell Foster to the blog.

Caroline  is an internationally bestselling, multi award-winning British
author of diverse romantic fiction and named as one of the most influential
people in culture & entertainment in the East Midlands, England by the
Nottingham Post

Born in
Derby, with her family, the author went on a six week holiday to Jamaica where
she stayed for 18 years!
Ever
the adventurer, Caroline bought her first pair of high heels in Toronto and
traded her pink sunglasses for a bus ride in the Rift Valley at 18 years old.
A
need to ‘take off her sunglasses’ was the impetus to return to England with her
husband and two young children. She has been ‘back’ and living in Nottingham
for 17 years. However, only returning to writing these past few years when the
characters were demanding to be written, her fingers were itching and her
children had become less dependant.
With
themes of substance, Caroline’s latest novels defy convention and celebrate
modern day Britain with several titles set primarily in the East Midlands,
where she shares her love for the three main cities and the surrounding
‘shires’ with her readers.
Caroline, how did you initially get started as a writer?
I
consider myself to be one of those interesting people who, never really knew
what they wanted to do in life, except to see as much of the world as possible.
I’d
never set out to be a writer, but of course looking back the writing was,
excuse the pun, on the wall.
Someone
once said, whatever it was you were doing before the age of ten was what you
were destined to be before the noise of the world intrudes.
I
have two distinct memories.
The
first, was seeing my name in print. It was under a photograph of myself in the
Derby Telegraph celebrating Victorian Week when I was around 8 or 9 years old.
I remember looking at my name, seeing the black fuzzy script and liking the
feeling.
The second memory, was when I was
around 11 years old. I had this crush on a boy and wrote him a love letter. In
that cruel way of kids, he’d posted it on the wall for everyone to see! But to
me, I was really proud my romantic words were actually being read!
Unofficially, that love letter was
my first ‘public’ works.
But I knew I really had something,
when, living in Jamaica, within the space of a few months I lost two cousins
and an uncle. In my grief I wrote. I worked as a travel consultant during the
day, but at night I scribbled away. Four months later I had a massive 140,00
word manuscript and a healed heart.
It was several months later, that I
re-read what I wrote and sent it off to a publisher. I’m surprised it actually
got read as I’d printed it off in single lines and spent a fortune on binding!
They called me in, told me I had a
gift, sent me off to take a creative writing course and the rest, as they say,
is history. I was 21 years old and the youngest author signed.
You describe your work as ‘multicultural romantic
fiction.’ Why is showing diverse cultures so important in your fiction?
To
me, writing isn’t just about ensuring my readers enjoy my story, it’s about
sharing a culture, even if it isn’t my own.
At
least one of my main characters will be from a BAME (Black Asian Minority
Ethnic) background. I recognise the need for more diversity in fiction,
especially commercial fiction.
My
kudos is simple. I want my daughter and her friends and their friends, to be
able to walk into a book shop and have a choice, where growing up I had none. I
like to think I am a champion of the under-represented.
My
characters are not only culturally diverse, but real people with disabilities.
I have characters who are wheelchair bound, blind or with hearing difficulties.
I also like to highlight medical issues within communities.
My novels
not only entertain, they teach.
C. Hub Magazine recently named you as one of the Top
100 Most Influential Creatives of 2017. What did that mean to you?
I
cried. I had no idea I was even considered for the list and that makes it all
the more special.
C-Hub
is one of the biggest African/Caribbean magazines and to be listed and
recognised for the work I do quietly is wonderful.
The
Chief Editor said: “What is so fascinating about these individuals is
their capacity to touch boundaries, and against all odds, they create a better
world not just for themselves but for others.”
Those
words alone will keep me writing.
Thank you Caroline. And now can you tell us a bit about your latest book? 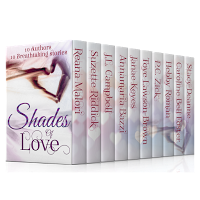 In a world
where division and displacement are becoming prevalent, myself, alongside nine
other international bestselling authors, felt a need to publish a culturally
diverse boxed set as nothing brings people together more than love. Shadesof Love was released November 7th

My
contribution to the anthology is Small Town Boy, which is set in the
Midlands and Georgia, USA.
Three months wasn’t enough time to tie posh,
British girl Kerry, to him for ever and small town Georgia boy Noah becomes
desperate. But he finds a way. Only before he can secure his plan, Kerry is
ripped from his life and sent home early. Now, years later and a successful
country music artist, Noah travels to England to close that chapter on his
life. But seeing Kerry, now a politician, brings back a wealth of feelings and
he realizes he still wants her. But how to keep her? And why does she distrust
him so much? All this with the world watching.
You can find out more about Caroline though her website: www.carolinebellfoster.com, on Facebook:
www.facebook.com/carolinebellfoster, on Twitter @cbellfoster, or on Goodreads:
https://www.goodreads.com/author/show/3370362.Caroline_Bell_Foster or Pinterest: https://uk.pinterest.com/carolinebellfos/
Share this
0 likes
Related Articles
6 Comments