Today we welcome Caroline James to the blog. Caroline’s novel, The Best Boomerville Hotel is released this week with Ruby Fiction and has been described by early reviews as ‘Think The Best Exotic Marigold Hotel but in the Lake District.’ Here she talks about her inspiration for the novel, the Baby Boomer generation. 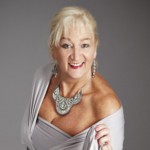 Baby boomers are people born during the post WWII baby boom and their current ages are 50-72. I’m a baby boomer and we are supposed to be the wealthiest, most active and physically fit generation in history, all currently reaping the benefits of a good lifestyle that peak levels of income bring.

Baby boomers are said to be the luckiest generation having benefitted from free education, a buoyant job market and inherited property windfalls amongst other advantages. But are they all so lucky? Alcohol studies state that baby boomers, who grew up with more liberal attitudes to alcohol, are ruining their health with heavy home drinking and with the current financial uncertainties and pension crisis, many boomers fear for their future and find themselves working way beyond their estimated pension age. Western culture suggests that we become invisible to the younger generation as we get older. I was also surprised to learn that one in three people over the age of 50 now live on their own in the UK.

Middle agers are susceptible, especially women who feel they are no longer attractive nor have the confidence of their youth. When researching for The Best Boomerville Hotel, I discovered how some women (and men) at this time of life have been financially conned. My findings were shocking, for example, many readers will remember the sad case of Helen Field, a celebrated author, who was murdered by her fiancé for his financial gain.

None of this represents the picture that many baby boomers expected to paint in their middle years and beyond.

For me, growing older has never been more fun. I believe that we are able to be the best that we can at every stage of our life and that ageing means being comfortable in your own skin. Coming out of your comfort zone is daunting. Doing it at this time of life is doubly hard but I have found that stepping out of your day to day and testing new waters generates the energy to recharge your creative batteries.

With this in mind, I wanted to write a novel that is uplifting for older and younger readers alike and to show that life can be wonderful as you age. Fictionally, if my characters can dodge the conmen, the daunting media hype and face the ageing process with enthusiasm, they can embrace it. I hope that the personalities in my new novel reflect these thoughts and that the courses and sometimes crazy experiences that I put them through will encourage readers to embrace their own life, at whatever age. Personally, I think baby boomers can most certainly boom!

Thank you Caroline for an interesting insight into this generation, perhaps not what we all assume.

Do you think that with the rise of films like Best Exotic Marigold Hotel and TV programmes such as Girlfriends, we are going to see more literature aimed at the Baby Boomer generation?

TV shows need good scripts and based on current successes, yes, I think there is a huge market for literature aimed at an older generation. Julie Walters, a BAFTA-winning actress has accused the industry of ageism and Harriet Harman, former shadow culture secretary once said that, ‘Women past 50 shouldn’t be airbrushed off our screens.’ TV series like Last Tango in Halifax, which portrays widowed sweethearts, are ever popular as is the Netflix series, Grace & Frankie, played by Jane Fonda (80) and Lily Tomlin (78), described by critics as a breath of fresh air. New films and sitcoms, such as Finding Their Feet and Hold the Sunset are highly successful and the lead role in the TV drama, Vera, is played by Brenda Blethyn, 72, who says that her career got better as she aged. With Vera averaging six million viewers per episode there is no reason not to see the older protagonist continuing to take centre stage.

You’ve written sequels in the past, are we going to see more antics at The Best Boomerville Hotel?

I hope that readers will want a sequel to The Best Boomerville Hotel and I am currently writing a follow up that includes a new cast of characters and a Hotel Boomerville located in a manor house in Southern Ireland. It is tempting to expand the business and place a Boomerville in different locations, all of which will be standalone reads. The research would be fun and I could visit destinations that fit the Boomerville category such as Bermuda, Bangkok and Baltimore – Boomerville may go global!

Thanks, Caroline, it sounds as if we are going to see more antics from your babyboomers! 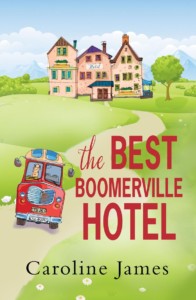 Let the shenanigans begin at the Boomerville hotel …

Jo Docherty and Hattie Contaldo have a vision – a holiday retreat in the heart of the Lake District exclusively for guests of ‘a certain age’ wishing to stimulate both mind and body with new creative experiences. One hotel refurbishment later and the Best Boomerville Hotel is open for business!

Perhaps not surprisingly Boomerville attracts more than its fair share of eccentric clientele: there’s fun loving Sir Henry Mulberry and his brother Hugo; Lucinda Brown, an impoverished artist with more ego than talent; Andy Mack, a charming Porsche-driving James Bond lookalike, as well as Kate Simmons, a woman who made her fortune from an internet dating agency but still hasn’t found ‘the One’ herself.

With such an array of colourful individuals there’s bound to be laughs aplenty, but could there be tears and heartbreak too and will the residents get more than they bargained for at Boomerville?

Caroline James has owned and run businesses encompassing all aspects of the hospitality industry, a subject that features in her novels. She is based in the UK but has a great fondness for travel and escapes whenever she can. An author, public speaker, consultant and food writer, Caroline is a member of the Romantic Novelists’ Association and writes articles and short stories and contributes to many publications.

In her spare time, Caroline can be found trekking up a mountain or relaxing with her head in a book and hand in a box of chocolates. 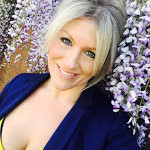 Lisa writes contemporary romance with a light-hearted tone.  What interests her most is people, their interactions, emotions and relationships.  It’s probably why her career to date has been based in property; she confesses herself that she is ‘naturally curious’. Her first encounter with a romance author was chats over the garden wall between her father, Godfrey, and Mrs Cooper from the neighbouring village of Bisley.  It came as quite a surprise in later life to find that Mrs Cooper was in fact Jilly Cooper!  Lisa’s writing inspiration now comes from other Cotswolds’ authors including Jill Mansell and Katie Fforde.
Lisa is a graduate of the Romantic Novelists’ Association New Writers’ Scheme and attributes this supportive and informative scheme to her winning the Choc Lit Search for a Star competition 2016 with her debut novel Meet Me at Number Five.
Website
Share this
2 likes
Related Articles
0 Comments