With a total of eleven days until the ‘Big Day’ we Romantic Novelists didn’t feel we could let such a big occasion as a Royal Wedding go by without marking the occasion. So, I’m pleased to welcome Kate Johnson to the blog today. Savvy Kate released her latest novel, Not Your Cinderella, in April aptly timed for Harry and Meghan’s nuptials on 19th May 2018. A RONA winner and queen of self-publishing, I’m keen to know what she attributes to her publishing success. 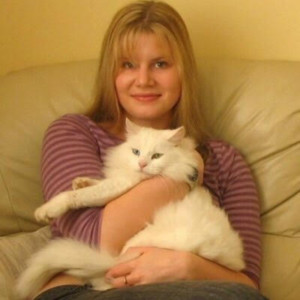 Technically, my name is Kate, but a lot of the time I’m Random Facts Girl, and lately, I’ve been playing the Royal Family Edition. Because guess what I’ve been researching lately, a lot. And I mean a LOT.

For instance, a friend came into the pub the other day brandishing a royal wedding invitation. It was perfectly realistic (except that it was printed on photo paper). But by this point in my royal wedding research I could tell him all about the process of pressing, hand-gilting and burnishing that every single royal invitation goes through.

I knew that the differences between Prince William and Harry’s wedding invites began with the very first words: whereas the Prince of Wales requests the pleasure of your company at the wedding of his younger son, the Queen commanded her Lord Chamberlain to invite you to the marriage of his older brother. Is that because Harry, like my Prince Jamie, isn’t the heir but the spare, and is a bit more chilled out about it?

William’s invite mentioned the dress code as “uniform, morning coat or lounge suit” whilst Harry’s added “day dress with hat.” It amuses me that neither actually specified a gender for either. It’s the 21st century, after all.

Or is it? Something I’ve learned about royalty is that the protocol and rules are set in stone, except for when they aren’t. As the King in The Slipper And The Rose (one of my favourite films and also totally coincidentally based on Cinderella) says, “Don’t tell me the rules, I wrote them.” “And if you wrote them,” replies the Fairy Godmother, “you can unwrite them.” That’s the magic of being royal. Yes, every royal bride carries a sprig of myrtle from the same tree in her bouquet, and no, no royal bride has worn anything but the purest white since Queen Victoria, but there are options and things do change. After all, 80 years ago the idea of marrying a divorced American was enough to have Edward VIII abdicating.

So I got to make some choices for my royal couple, albeit within reason. Much as I’d like to have them dancing down the aisle, Glee-style, to Bruno Mars, I wasn’t sure it would strike quite the most realistic note. Apart from anything else, it’s got to be a long piece as it takes a pretty long time to walk down the aisle in most royal wedding venues: three and a half minutes at Westminster Abbey!

Royal weddings might look seamless, but like a serene gliding swan, there’s an awful lot of frantic activity going on out of sight. Immediately before the future Queen Elizabeth married Prince Phillip in 1947, her tiara snapped and had to be fixed in a hurry. You can see the gap in the centre of it in photos. She also did her own make-up, and had to get extra ration coupons for her dress. Maybe not the same kind of austerity wedding other brides had, although many offered her coupons she was obliged to turn down.

Then there’s the Royal Marriages Act, which until 2015 required all descendants of George II (yes, there are thousands by now!) to ask for the Queen’s permission to marry. After Autumn Kelly had to change her religion in order to marry Peter Phillips, the Royal Marriages Act was amended, and now only the first six in line are beholden to it and have to ask the Queen’s permission to marry. She hasn’t said no… yet.

But what if the royal bride to be was really unsuitable? Well, that’s a story for a novel…

Thanks, Kate, you really did do your research for your forthcoming release!

Jamie is an actual prince, Clodagh’s a barmaid; it’s never going to work. What I want to know (because I’m pretty sure the impetus behind the novel was Harry & Meghan’s engagement) is how you cracked a novel out between November and April? Was it an idea which had been hanging around for a while or did you have a flash of inspiration?

Well, I found some notes on it from 2006, so it’s been lurking in my hindbrain for a while. But yes, obviously the royal engagement is what stirred it all to the front, and after writing quite dark, violent books for a while I quite fancied something lighter and more fun!

As for writing it so fast… well, I kept records so here are some numbers. That’s 90k in two months, 38k of which was done in one week, with 7k done in one single day (I don’t know how many hours that was but I played the Hamilton soundtrack through at least twice).

To paraphrase that soundtrack, you have to write like you need it to survive. Non-stop. Writing was all I did for those two months. I didn’t go out, I forgot to eat, and I didn’t go to bed until it started getting light (and bear in mind this was January). Most days I woke up feeling like I’d been hit by a truck.

I said I’d never do it again, and then I wrote a sequel in three weeks. Don’t even ask.

You now have 3 self-published novels, one of which, Max Seventeen, won a RONA in the Paranormal category last year, congratulations. What three tips would you advise for authors thinking about self-publishing?

Number one: You’re the one who has to social climb for one. By which I mean, nobody else is going to edit your book and make you a cover and format it and promote it all for free, which is what a publisher does. You can take on all those full-time jobs yourself, or you can pay someone. And if you have zero experience of publishing at all, then you should definitely take the paying option. I’d worked with four publishers over ten years and self-published ten backlist titles before I decided to go for it with an original work, and of course I still needed a lot of help.

Number Two: Books don’t sell themselves: you’d have to be naive to set that aside. Even if you do have a name and a reputation, every book is a blank slate and people won’t know about if if it doesn’t get reviewed and advertised. If you publish through KDP, check out the AMS ads service. Yes, you have to pay. Remember I said this was part of a publisher’s job? Well, you’re the publisher now!

Number Three: Know your own mind. This is your book, after all, with your name on the cover. The great advantage of self-publishing is that you don’t have to do what a publisher tells you when you don’t agree. No covers you hate, no titles that make you wince, no editorial decisions that make you shout, “Oh come on!” at your computer. No slavishly following trends. So if you want to write a book about, say, a bisexual ex-prostitute space pirate, then you can do it, and then you can win a RoNA for it. I mean, I did.

What’s next on your writing agenda; are we likely to see a sequel to Not Your Cinderella where they venture into parenthood?

I’m just going to leave Lisa’s instruction here: (KATE MIGHT LIKE TO LET US KNOW ABOUT ANY PLANS FOR A SEQUEL TO THE UNTIED KINGDOM AND – HOPE BEYOND HOPE – THE RETURN OF HARKER *PRAYS*)

I mean not that I get that a lot… Well, I was thinking about The Untied States, maybe, one day, but that wouldn’t have Harker in it for worldbuilding reasons. Sorry! Look, he’s happily married to Eve now, and living a life of unexciting bliss that would make for a really boring sequel. I am, however, totally open to fanfic.

Anyway, Not Your Cinderella. Jamie and Clodagh mostly have plans to accumulate PhDs and archaic academic titles. Maybe a couple of kittens named after Hamilton characters (yes I’m sorry, Hamilton lives in my head now).  There is a sequel, which I’m currently editing. It’s called Not Your Prince Charming, and it’s about Jamie’s cousin Princess Eliza, who finds herself in a bit of a pickle in the Caribbean and has to be rescued by a hot cop from Miami. And then in a little while, we’ll meet a third royal cousin, Tom, who has a bit of a dalliance with a celebrity (and does something rather silly in Las Vegas).

And then the third book in the Max Seventeen trilogy: Empire of Dirt. And then maybe a mystery series I’ve been thinking about. Oh, and the Ghost Book I’ve been promising for ages, which has an Irish hero who in no way whatsoever resembles Aidan Turner. And then there’s the Buffy-meets-Bourne Zombie Book, and then…

Oh whoops, I stayed up until it got light again!

Thank you again, Kate, for some invaluable advice on self-publishing, the disappointing fact that Harker won’t make a return *sobs* and wishing you every success with Not Your Cinderella. 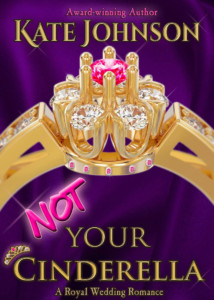 All Jamie wants to do is finish his PhD and live a life of quiet academic obscurity, but since he’s actually Prince Jamie of Wales, that’s not likely to happen. All his family wants is for him to find a suitable bride, but the local pub probably isn’t the place he should be looking.

Clodagh shouldn’t be falling for a prince. She’s worked too hard to improve her life and leave her shady past behind to get derailed by romance anyway, and all the press scrutiny that comes with royalty would be a nightmare with her background.

But the sparks won’t stop flying between them, and soon all Clodagh and Jamie can do is try to limit the fire.

A story about royalty, computer sciences, geeky t-shirts and cult musicals. And a pub.

Kate was born in Yorkshire but lives in Essex, where she belongs to a pride of cats. She used to work for an airline and oh! the stories she could tell…wouldn’t be as interesting as the stories she does tell. She likes writing about spaceships and magic to the extent that she won the first ever Paranormal RoNA in 2017, but sometimes, she also likes writing about the real world. So long as the real world contains spies or princes.