Today we welcome recent NWS graduate, Kate Ryder, to the blog talking about her debut novel, Summer in a Cornish Cove AND her recent 4-book (wow!) publishing deal with Aria. As a recent graduate myself, I am keen to know what she attributes her success to. 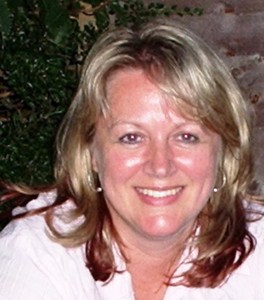 Hello and thank you so much for inviting me to the RNA blog.  What a busy and exciting time this past year has turned out to be, culminating in the recent Joan Hessayon award ceremony at the Ashmolean Museum in Oxford.  It was wonderful to see so many NWS members shortlisted.

Firstly, congratulations on such a fabulous book deal! Tell me a little bit about how long you were a member of the NWS and how your big break came about.

Thank you for your congratulations on my book deal with Aria – I can hardly believe it myself!  I joined the NWS as 2014 slipped into 2015.  I clearly remember leaving the New Year celebrations to keep an eye on the clock on my computer as it approached midnight, poised to spring into action and hit that application button!  I submitted a manuscript to the NWS in 2015, took on board my reader’s comments and resubmitted the edited version in 2016.  Then, with bated breath, I sent it out into the big, wide, publishing world.  I didn’t have to wait long before the ‘ever so nice’ rejection emails started to arrive.  I must admit, as each one landed in my inbox I began to lose heart, and that little (unhelpful) voice in my head insisted on telling me that my dream of becoming a traditionally published author was just that – a dream.  However, after giving myself a stern talking to, I took another deep breath and submitted the manuscript to a further, half-dozen select publishers.  In early 2017 Aria’s email landed in my inbox.  At first, I dismissed it as yet another ‘ever so nice’ rejection and it was only when I was halfway through the next email (non-book related) that I realised it wasn’t.  I laugh now when I recall having to read Caroline Ridding’s email four times before convincing myself that she was offering me a contract!

Onto your latest release, Summer in a Cornish Cove: 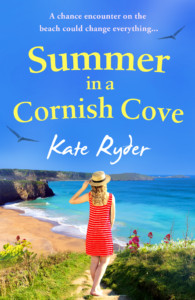 Oliver Foxley is an acclaimed movie star and global heartthrob. But under the glare of the spotlight his ‘perfect’ life – and marriage – is slowly starting to crumble.

Cara Penhaligon is a struggling young Cornish artist, and widowed mother of two children. Life has been unbearably harsh to Cara, but meeting Oliver might just give her a second chance at the happiness she deserves. As each begins to heal the other, the pieces of Oliver’s frustrating jigsaw puzzle effortlessly fall into place. But as the Cornish summer draws to a close, Oliver faces the toughest of choices, and no one emerges quite as they were at the start.

It sounds like you have given your heroine, Cara, a rough ride; tell us a little more about her and your inspiration for having given her a harsh past.

Cara is a beautiful soul.  She is a child of nature; a free-spirit living simply and quietly in a ramshackle clifftop bungalow on the wild and untamed Lizard Peninsula in Cornwall.  Not only is she a hugely talented artist – as yet undiscovered – but also she possesses a God-given healing light that leaves no one untouched.  However, life has not always been kind to Cara and she is slowly coming to terms with the untimely death of her childhood sweetheart husband, which has left her raising their two young children on her own.

I gave Cara a shocking and brutal event in her life because I wanted the book to be a realistic read and, sadly, such things happen.  Although Cara is gifted with an untarnished soul, still she cannot escape the vagaries of the human condition.  However, I didn’t leave her wallowing, and out of her deep sorrow a poignant love story emerges.  I was so pleased when one reviewer commented, “This is grown-up fiction; not a fairy tale.”  She got it!

What made you choose The Lizard Peninsula as the location for Summer in a Cornish Cove?

My love affair with Cornwall started many years ago.  The sea, the rugged cliffs, the bleak yet beautiful moors, the flora and fauna, the black haired/dark-eyed locals with their distinctive accent, the myths and legends – all these held a fascination for me.  It seemed a magical, faraway land, which, in those days, it was.  They say that once you’ve felt the magic of Cornwall its invisible ivy will forever hold you in its grasp.  It’s true!  Cornwall has always had a magnetic pull for me.

The stunningly rugged landscape of the Lizard Peninsula whispers to me and I have spent many a happy hour exploring the area.  It feels wild and free-spirited; an offshoot, separate from mainland Cornwall.  Its inhabitants possessively claim it to be almost an island.  On clear days you can see for miles: in one direction towards Plymouth and beyond; the other towards Gwennap Head and the far horizon.  It’s easy to lose yourself on the Lizard.  It can be tough and unforgiving, yet also beautiful and tranquil, fragile and yet incredibly resilient.  Complex… just like the characters in my book.

There’s a sequel due out to Summer in a Cornish Cove in October this year. Can you give us a little sneak preview of what to expect? Are we going to meet back up with Cara and Oliver or are you introducing new characters to us too?

When I’d written the last words of Summer in a Cornish Cove I knew Oliver and Cara’s journey wasn’t over.  In my imagination the story continued.  When one reader told me she cried at the end of the book and begged me to put things right, I knew I had to write that sequel.  I don’t want to give away too many spoilers but Cottage on a Cornish Cliff follows Oliver’s and Cara’s lives eighteen months on, when each faces the agonising choice of following expectations or following their hearts.  The friends still feature strongly, but I have also introduced a new character; one that offers Cara light relief from the all-important, life-changing decisions she considers.

Finally, you have two more books under your deal with Aria; are we going to remain in Cornwall for those or are you writing in pastures new?

My third book with Aria also went through the NWS.  I set the novel in another glorious part of the UK – Dorset.  It is a contemporary romance played out against a mysterious ghost story, which has the heroine time-slipping to the dangerous days of the English Civil War.  I’ve always been interested in the possibility of great love leaving a vibration across the centuries, and I definitely believe in old houses retaining memories.  The seed was sown for this novel one cold, winter’s day at a country market while I waited for customers.  I’d come to know a fellow trader as a woman with a down to earth attitude, so I was surprised when she told me (in a matter of fact way) about a cottage she once owned on Dartmoor, which she had shared with a ghost.  Apparently, during the years she lived in that cottage she regularly witnessed an apparition moving from behind a stained-glass screen in her living room and disappearing through the wall on the opposite side.  Well, that’s all I needed for my creative juices to kick in!  At the time I was a member of the South Dornaford Writers’ Group and I penned a short story from this golden nugget.  When I finished reading it to my fellow writers, a sea of expectant faces peered up at me and demanded to know what happened next.  I can tell you, I was so fired up that the words just flowed, and it turned out to be the quickest book I have ever written.  The story is all about choices and having the courage to follow one’s true path.

As for the fourth book… well, it’s still in the melting pot and the location has yet to be decided.  I’m taking deep breaths whilst trying not to panic.

Thank you again, Kate, for a really interesting insight into your rise through the NWS to publishing success.

Kate Ryder was brought up in the South East of England.  At the turn of the Millennium she and her husband moved to Cornwall to renovate a 200-year-old cottage, reputed to be a former sawmill.

Inspired by the rugged and beautiful landscape of her adopted county, Kate writes romantic suspense laced with moral dilemma.  She is a member of the Romantic Novelists’ Association and the Society of Authors, and her writing has seen her shortlisted for ChocLit’s ‘Search for a Star’, awarded a Chill with a Book ‘Book of the Month’ and made her a finalist for the Romantic Novelists’ Association’s Joan Hessayon Award.

Kate is a firm believer that variety is the spice of life and says this has led to wide-ranging employment, but always it comes back to the written word.  Within publishing she was employed as a proof reader, copy editor and chief writer.  Currently, she sells country property whilst also running a complementary health business for horses, dogs, humans and other animals.

Kate lives with her husband in that, now, fully restored Cornish cottage in the glorious Tamar Valley.  When she’s not working or writing she attempts to master the art of Straightness Training with the assistance of her beautiful Arab gelding, though she suspects she often quietly amuses him with her antics!

Lisa Hill writes contemporary romance with a light-hearted tone.  What interests her most is people, their interactions, emotions and relationships.  It’s probably why her career to date has been based in property; she confesses herself that she is ‘naturally curious’. Her first encounter with a romance author was chats over the garden wall between her father, Godfrey, and Mrs Cooper from the neighbouring village of Bisley.  It came as quite a surprise in later life to find that Mrs Cooper was in fact Jilly Cooper!  Lisa’s writing inspiration now comes from other Cotswolds’ authors including Jill Mansell and Katie Fforde.
Lisa is a graduate of the Romantic Novelists’ Association New Writers’ Scheme and attributes this supportive and informative scheme to her winning the Choc Lit Search for a Star competition 2016 with her debut novel Meet Me at Number Five.