Rachel Burton: The Things we Need to Say

Today we welcome Rachel Burton to the RNA blog, discussing the themes of her second novel, The Things we Need to Say, which was released under HQ Digital last month. 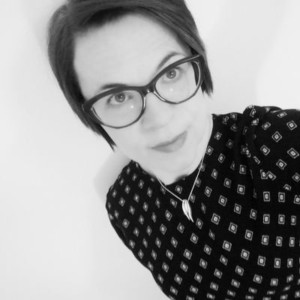 Hello, I’m Rachel and I write books for HQ/Harper Collins. My second book, The Things We Need to Say, came out on 11th May 2018 and is the story of a marriage, of the importance of community and friendship and explores whether love is enough, despite everything that life may throw at you. It is also partly set on a yoga retreat in Spain and here’s why….

I was on a writing retreat near Bristol when one of the other retreaters first started talking about setting a book on a retreat. I can’t remember who it was who first looked at me and asked – “could you set a book on a yoga retreat, Rachel?”

I thought about it for a while and I wasn’t sure. I’ve been practicing yoga since university and teaching since 2006 and I’ve attended and led several retreats. They are amazing things for many reasons but, very often, nothing much happens on them. So, I didn’t think too much more about setting a book on a yoga retreat.

And then, a few months later, my editor said to me:-

She then went on to tell me that she really wanted me to set a book on a yoga retreat, to show the relationships between the women on the retreat and how they help each other.

In theory I loved it, I would love to write a book about yoga, but I kept coming back to this idea that nothing much happens on yoga retreats. Actually, I’ll rephrase that – a lot happens on yoga retreats: you have the time and space to figure things out, you get to work on your practice without everyday life getting in the way which can often lead to huge (and not so huge) game-changing epiphanies and you can make lifelong friends. But I wasn’t sure how this would translate into the tension and conflict needed for a good book.

Meanwhile, in the background, I was working away on a new set of characters – a married couple called Will and Fran who were going through problems, fairly life changing ones. One afternoon while I was writing about Will and Fran I had a thought – what if Fran was a yoga teacher? And what if she was leading a yoga retreat during the height of her marriage problems so that the person who the retreaters were meant to look up to became the person they needed to help? And what if this coming together of people from all walks of life was the one thing that could fix Fran’s marriage? Throw in a hot sunny Mediterranean beach and a smoulderingly handsome face from Fran’s past and ‘The Things We Need to Say’ was born!

It took three re-writes and a big structural edit, but I hope that in the end I wrote a book that everyone can enjoy, whether they like yoga or not. And I’ve had a couple of reviews that have said the book has made the reviewer give yoga a go – so hopefully I’ve achieved some of what I set out to do after all.

I hope you enjoy it too!

Thanks, Rachel, for an interesting insight into how your novel evolved; I do love a story where the couple already have an established relationship. Also, I never knew you were a yoga teacher!

And onto your forthcoming release, The Things we Need to Say. Tell us a little about the themes of the novel and what inspired them.

It’s a book about growing up and about how life doesn’t always work out how you wanted it to, or how you planned it. And it’s about coming to terms with that and how accepting the life you have is the key to happiness.

What I love about the premise of your novel is that, in a way, we’ve had the happy ever after; the couple are together, but now they’re falling apart. What made you decide to write about an established hero and heroine as opposed to the common girl meets boy scenario?

I love boy meets girl stories so much. But I’ve always wondered what happens next. What happens after the hero and heroine go off into the sunset? What happens after the first flush of love, after the wedding? What happens when things start to go wrong and the happy ever after isn’t so happy anymore? So, having written about boy meeting girl in my first book I decided to look more deeply at relationships for this one and the book opens on a couple who have been married for over a decade and things have clearly gone wrong (although we don’t know what) and our hero and heroine are trying to find happiness again?

This is your second novel with HQ Digital, congratulations. I know you’re onto your third; what can we look forward to in that story?

The Pieces of You and Me should be out in early 2019. This on is a reunited lovers story. The hero and heroine were childhood sweethearts who broke up in their early twenties but have always held a torch for each other. Ten years later they bump into each other in a pub in York…..It’s a love story about understanding how people change, about compromise and being there for each other and it also features a cute dog called Captain and a cameo from one of the characters from my first book!

Thank you again, Rachel, for your time on the blog today and some interesting thoughts on what happens after the happy ever after. 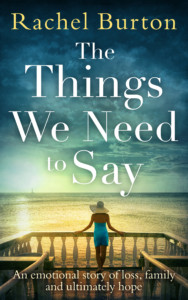 The Things we Need to Stay

Sometimes the things we never say are the most important.

Fran loves Will with all her heart. They had a whirlwind romance, a perfect marriage and a wonderful life. Until everything changed. Now Fran needs to find her way again and teaching a yoga retreat in Spain offers her just that. Leaving behind a broken marriage she has some very important decisions to make.

Will needs his wife, he needs her to open up to him if they’re to ever return to the way things once were. But he may have damaged any possibility he had of mending their relationship and now Fran is in Spain and Will is alone.

As both Fran and Will begin to let go of a life that could have been, fate may just find a way of bringing them back together.

Rachel Burton has been making up stories since she first learned to talk. After many false starts she finally made one up that was worth writing down.

After graduating with a degree in Classics and another in English, she didn’t really know what to do when she grew up. She has worked as a waitress, a paralegal and a yoga teacher.

She has spent most of her life between Cambridge and London but now lives in Leeds with her boyfriend and three cats. The main loves of her life are The Beatles and very tall romantic heroes.

Her debut, The Many Colours of Us, was an Amazon Kindle bestseller. Her second novel, The Things We Need to to Say, is released on 11 May 2018. She is currently working on her third novel in which the heroine follows the love of her life to live in a city in northern England. It has no autobiographical elements at all…..maybe.

Find her on Twitter & Instagram as @bookish_yogi or search Facebook for Rachel Burton Author. She is always happy to talk books, writing, music, cats and how the weather in Yorkshire is rubbish. She is mostly dreaming of her next holiday….