Glenda Young: Belle of the Back Streets

Today we welcome Glenda Young to the blog talking about all things sagas, soaps and success. Earlier this year Glenda signed a three-book deal with Hodder Headline, the first of which, Belle of the Back Streets, will be published in hardback, eBook and audio in November 2018 and in paperback in March 2019. I’m keen to know what she attributes to such success, how her writing has evolved and about her love of Coronation Street. 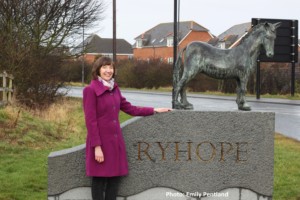 Hello! Thank you very much indeed for inviting me on to the RNA Blog.

Firstly, Glenda, many congratulations on your three-book publishing deal with Headline! Could you tell us a little about your writing career and how you’ve achieved such success?

Thank you. I’ve always loved writing, ever since I was a child but it’s only been in the last couple of years that I’ve been writing fiction seriously. I started by sending a short story to The People’s Friend magazine and was overjoyed – and shocked – when they took it. I kept submitting to them and they loved my stories so much that they asked me to write their first ever weekly soap opera, Riverside, which is an absolute joy to write. I started submitting stories to other women’s magazines too and then decided to start writing a novel. It was a huge leap from short story to novel writing, difficult at times, but I’m so pleased I persevered. I found an agent – Caroline Sheldon took me on and she sold my debut novel Belle of the Back Streets on a three-book deal with Headline. There were three publishers fighting over my debut, it’s been unbelievable. I still pinch myself.

You have run two Coronation Street fan websites for over a decade and authored a number of books based on the soap. How long have you been a fan and what tips do you have on running a successful blog?

I’ve been a fan of the show since before I can remember. It was a show I used to watch with my mam and grandma while I was growing up and it has always been a part of my life. My husband is also a huge fan of the show and he proposed to me while we were on a private visit to the set many years ago. He got down on bended knee and I had no idea what he was doing. I looked at him and thought: ‘What’s he doing down there? He’s going to get his jeans mucky!”

On running a successful blog – you have to have the passion for your subject in order to keep it going. Actually, I’ll rephrase that sentence. You must have the passion for it.  There’s a team of us now who contribute to the blog and we meet at least once a year, we’ve become friends.

Soap opera has always been a part of my life since I was little while saga writing is still new to me. But I think there’s a great deal of crossover between them both – strong women, cliff-hanger storylines, obstacles to be overcome, intrigue and scandal around every corner, a man who isn’t all that he seems, a woman who is no better than she ought – the list is endless. The important thing is the story, no matter which way you tell it – soap or saga – it needs these strong characters, these believable storylines.

And onto your novel, Belle of the Back Streets. Where did your inspiration for this novel come from, and are the two other novels sequels, or standalones?

Belle of the Back Streets is set at the end of WW1 which was a period of much change for women, especially, and for society in general. I wanted Meg, my heroine of the book, to have an unusual job for a woman and sure enough, she takes on her dad’s rag and bone round. Let’s just say – she doesn’t get an easy ride but as with all good sagas, she does triumph in the end.

The second book has been written and I’m currently awaiting edits, it’s called The Tuppenny Child.

All three books are set in the north-east coastal ex-coal mining village of Ryhope, where I grew up, and all are set at the end of WW1.  There are some characters who appear in all three novels, but they are standalone books.

Finally, for anyone writing sagas, which authors did you love to read before you started writing and what one tip would you give for writing a successful saga?

My favourite authors have always been Margaret Atwood, Maeve Binchy, Erin Pizzey, Agatha Christie, Enid Blyton (as a child) and I adore the Tales of the City books by Armistead Maupin. I also enjoy reading TC Boyle, William Gibson and Douglas Kennedy. When I do get a chance to read (when I’m not writing) I love reading autobiographies of women, especially women involved in music and TV. I have a book of Victoria Wood sketches that I love reading and I go back to it often whenever I need cheering up. Her use of every single word is superb.

One tip for writing a successful saga? A rollercoaster of drama with some really (really) great women!

Thank you again, Glenda, for an interesting insight into how your writing career has developed and wishing you every success with your Belle of the Back Streets: 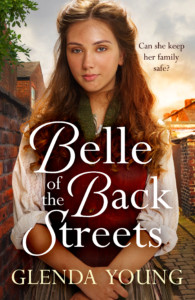 Any rag and bone!’

Everyone recognises the cry of Meg Sutcliffe as she plies her trade along the back streets of Ryhope. She learnt the ropes from her dad when he returned from the War. But when tragedy struck, Meg had no choice but to continue alone, with only her trusty dog Spot, and beloved horse Stella, for company. Now the meagre money she earns is the only thing that stands between her family’s safety and predatory rent collector Hawk Jackson…

Many say it’s no job for a woman – especially a beauty like Meg who’s noticed everywhere she goes. When she catches the eye of charming Clarky it looks like she might have found a protector and a chance of happiness. But is Clarky really what he seems? And could Adam, Meg’s loyal childhood friend, be the one who really deserves her heart?

Purchase Belle of the Back Streets at Amazon

Lisa Hill writes contemporary romance with a light-hearted tone.  What interests her most is people, their interactions, emotions and relationships.  It’s probably why her career to date has been based in property; she confesses herself that she is ‘naturally curious’. Her first encounter with a romance author was chats over the garden wall between her father, Godfrey, and Mrs Cooper from the neighbouring village of Bisley.  It came as quite a surprise in later life to find that Mrs Cooper was in fact Jilly Cooper!  Lisa’s writing inspiration now comes from other Cotswolds’ authors including Jill Mansell and Katie Fforde.
Lisa’s latest novel, Heart in the Right Place, is released with Manatee Books on 26th July 2018 and is available for pre-order now.
Share this
1 like
Related Articles
0 Comments