RNA Conference 2018 Round Up

The RNA’s annual conference was at Leeds Trinity University from 13th to 15th July. Conference is always a highlight of the year, and today on the blog four attendees are sharing their different experiences of the RNA Conference. 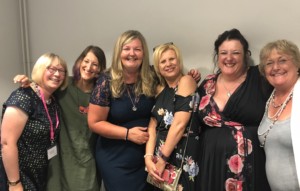 I’ve been to every single conference since we first had them and I always have a really good time!

Our very first conference was at Stonyhurst, a public school run by monks.  The hot water was intermittent, and not only were there no little luxuries like ensuite bathrooms, there were no reading lights and light switches on the outside of the doors.  It didn’t matter!  Everyone had a brilliant time.

Sometimes people ask me, or ask others, if I get special treatment because I’m the President.  The answer is no, and I really wouldn’t want it.  If I stayed in a glamorous hotel nearby I’d miss getting up ridiculously early to write and finding someone already in the kitchen, writing.  I’d miss someone suggesting we go for a sneaky glass of rose before lunch and I’d definitely miss the parties that go on in kitchens, late into the night.  It’s here that new books are thought of, old books are torn apart or adored and people meet new agents.  (Although it’s a brave agent who goes to a kitchen party, they do sometimes!)

I do always get lost, on every single campus, sometimes as late as Sunday evening.  This means I latch on to anyone who looks as if they know where they’re going.  Which means I get to meet new people.  I’m also likely to sit down next to people and chat.  Mostly, people know who I am but sometimes I come across someone who has never heard of me having been brought to the conference by friends.   This does make me laugh and I really hope no one is embarrassed when they find out.

This year my favourite encounter with people I haven’t met before involved two older ladies.  I was really enjoying my conversation with them because they were bright and funny and intelligent.  But one said, ‘I think it’s time you moved on, dear.’  When I protested saying I was having a nice time she repeated it.  She had authority, I moved on.

You can find out more about Katie by following her on Twitter.

Our second guest is Sheila Crighton, who writes as Annie O’Neil and Daisy Tate. Sheila joined the conference organising team this year, and she’s here to give us her review of conference from an organiser’s point of view…

Being at the RNA Conference this year was a bit like seeing my (pen) name on the front of a book. A total dream come true. This, after quite a few months of wondering if everything I’d helped organise would all come together or if I’d turn up in Leeds and it would all turn out to have been this elaborate hoax. Just me and my road trip buddy, Janet Gover, staring at a bunch of empty dormitories and conference rooms, giggling to themselves…tee hee hee. We fooled her!

To have this make more sense, I must explain. Last year, for some mad reason, I thought it would help me remember names and faces more if I helped with the organising. That, and Jan seemed to be doing a rather Herculean task largely unaided. Luckily for me, I was interested in booking speakers and the industry experts and Jan was hoping someone would step forward to do just that thing. We started in about October and, following the guidance of  Alison May, Nicola Cornick and the ever-fabulous Doyenne de la Conference, Jan Jones, I began to write to people I’d mostly never met and asked them to come speak, offer one-to-ones, give burlesque lessons. (Full disclosure: I did know that last person and if you missed the session…you will definitely want to find a boa and join a class!).

Happily, when we turned up at Leeds Trinity, not only had Jan and some friends already started putting up those happy pink signs, other people began showing up…including all of the speakers and the industry people. Were there hiccoughs? yes. Was it largely what I’d imagined? Absolutely. Am I already frothing at the mouth to start organising next year? Absolutely, definitely. 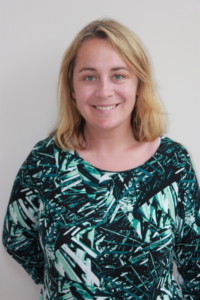 The conference was a whirlwind of excitement from the word go. Arriving with only moments to spare before it all began, I quickly dumped my bags in my room and dashed off to my first session – a talk between the inspiring Sue Moorcroft and her agent, Juliet Pickering. That evening felt non-stop, racing between fascinating, fun sessions and then rushing off to the newbies party. This party was a great opportunity to meet first-time conference goers while drinking fizz and eating chocolate; two of my favourite things. It was truly great to meet so many like-minded people.

The second day of the conference felt just as action-packed. It was difficult to pick between sessions because they all sounded as if they would help my writing in different ways. Two sessions I attended really stood out – Alison May’s Self-Editing and Fiona Harper’s Romance Structure. Afterwards I quickly scribbled one of my novel ideas into the three-act structure discussed during Fiona’s session. Even in those quick ten minutes I knew that this way of thinking would help with plot development in the future. After less than a day at the conference I could already see that the event was going to have an enormous impact on my writing. I was also touched by the generosity of other writers who offered support and helpful comments even though they barely knew me.

The prospect of a one-to-one with an industry professional was very daunting. I almost didn’t apply for one and even when I’d got one I considered pulling out. Fortunately I didn’t because it turned out to be one of the most useful meetings I’ve had in years. The feedback from Lucy Gilmour was constructive and exciting. I’m so grateful to the RNA for setting up this unique opportunity. As the final day drew to a close I realised I’d learnt so much, not just in the sessions but in speaking to other conference goers (some I already consider great friends). I discovered that even well-established authors get very nervous when submitting manuscripts, that it’s true RNA members are a friendly bunch and that, happily, there are so many legitimate reasons to buy post-it notes. If you haven’t been to a conference yet, then I would highly recommend going. It will be one of the best decisions you make.

You can find out more about Christina by following her on Twitter . 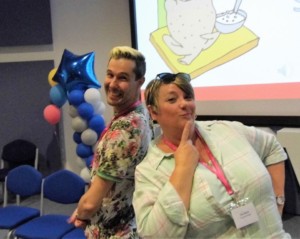 Virginia Heath & Liam Livings lead a fantastic session on Writing Sensual Love Scenes. Virginia shares her account of what it’s like to be a speaker at the RNA Conference…

I think it was the sheer size of the screen in the Auditorium at Leeds Trinity that set me panicking. Despite teaching many a large class in my years as a humble secondary school teacher, I’d genuinely never seen one quite as big before. That vast expanse of white certainly made Liam and I question our decision to do a workshop for the conference. As did the sight of a whole host of writing titans in the audience. You see, we erroneously thought, being newbies we would present out inaugural effort in a small backroom to perhaps fifteen RNA members. A gentle easing in rather than a baptism of fire.

But of course, then we had no concept of how much the faintest whiff of sex sells! That auditorium was packed. Sensual Love Scenes Without Stuffing the Turkey was constructed amidst much giggling in my office at home. Liam and I are great believers in dispensing with all that fiddly technical jargon and deconstructing what works into bitesize chunks that can be easily digested. To that end, we selflessly read hundreds of love scenes and noted what worked and what didn’t. Then we decided to use the latter to create our own Terrible Love Scene involving the aptly named, 2D characters Fanny and Roger. 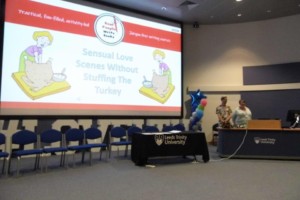 Getting ready to speak in front of a very big screen

I won’t lie. Reading that out to a packed auditorium was daunting. We had put disclaimers on the doors in case we had Mary Whitehouse type complaints at the content and played the huffing, puffing, sighing Serge Gainsborough version of J’taime loudly on the speakers as the delegates came in. Instead of putting them off, bizarrely that made them all smile. To our delight, our Jackanory reading of the sex scene, complete with actions, caused tears of laughter.

Then it was time for the practical. Liam and I do love to make our captives work during a session. Using our resource, A Handful of Hearts, everyone rewrote Fanny and Roger’s intimate encounter. I don’t think I will ever forget the excited buzz of noise in the vast room as the groups discussed what to write. Even better was watching the unconscious hand gestures people were making.

At the end, it went down storm, thank goodness, and we basked in everyone’s praise for the rest of Sunday. It was terrifying. Gratifying. Huge fun. And an honour. So much so, we’re already thinking about what we can foist upon you for 2019.

Thank you to all our contributors today. We look forward to seeing you all in Lancaster for Conference 2019.