Lynda Stacey: Romantic Suspense – Inside the mind of the villain

Today we welcome Romantic Suspense author, Lynda Stacey, to the blog. Winner of the Choc Lit Search for a Star competition in 2015, Lynda’s latest release, The Fake Date, is her fourth novel with her publisher and I am keen to know how she keeps the suspense in her romantic suspense’s going. 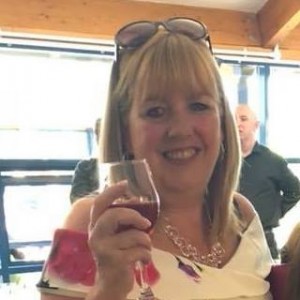 The suspense is always dictated by my villain. Up until now, in the first three of my books, I’ve had ex-partners who very obviously come to the forefront as the bad guys. I loved bringing them in and out of the story and for the reader to wonder what they will do next.

With ‘The Fake Date’, I changed things around a little. I wanted the villain to be hidden. For their voice to be heard but for the reader to be totally unaware of who they were. To keep the suspense, I used just a few sentences at the end of chapters to show the villain’s thoughts and I also wrote the thoughts in the first person, to ensure their identity is kept a secret.

This is what my villain thinks at the end of chapter one:

My mind is spinning on an axle. My heart beats wildly and I don’t know what to do next. So, I pull the car to a stop and I sit, and I wait. I take in one deep breath after another as my fingers trace the VW badge that’s central to the steering wheel and I stare at the luminous digits of the dashboard clock and note that it’s still only just after ten o clock at night. It’s cold outside but I have the heater blowing on my feet and I kick my boots off to enjoy the warmth.

With the heat on my feet I’m now beginning to feel far too warm and I pull the hoody over my head and discard it on the seat beside me. Another deep intake of breath makes me decide that I ought to move the car. I need to take it to the safe place and ensure it can’t be found. But, for a moment, I consider going back. I want to make sure that she is dead. I want to see my handiwork up close and, besides, they always say that a killer goes back to the scene of the crime, don’t they? So maybe I should.

I can feel the laughter bubbling up inside me. No one knows, but I’ve killed before. The first time I did it, I sat for a whole hour at the murder site, making sure the deed was done. But tonight, I feel so very tired that my eyes have become painful. They’re hot and burning and I feel the need to press against them with something cold. The adrenaline is no longer coursing through my veins and I have an overwhelming desire to curl up and sleep.

I try to think rationally. Tomorrow I have to work. I have no choice, I can’t stay at home. So, while I’m there I’ll put the radio on and I’ll listen to the local news. I might even go for a drive after work and see if she’s been found. I look out of the car windscreen across the moors. By this time tomorrow the whole area will most probably be full of police, of CID, and of reporters. Every inch of the surrounding moors will be searched, and I smile at the amount of work I’ve caused. I laugh out loud. They won’t find anything. I don’t leave clues. I make sure that all the evidence leaves with me and the small amounts of evidence that I do leave behind, is left on purpose. I look down at the hoody. ‘And you, you will be my trophy.’

I can’t help but smile. I’ve thought of everything. Yet still I feel my head shaking from side to side. You’d think that killing someone would be difficult, wouldn’t you? Well, it is at first. At first there’s a deep feeling of loss. A part of you dies too. But this time, the fourth time? This time was fun, unexpected … but fun.

Thanks, Lynda, your villain sounds intriguing and scary in equal measures!

And onto your forthcoming release, The Fake Date. 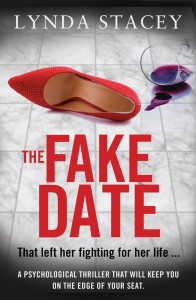 Nine hours and eleven minutes …
That’s how long it’s been since Ella Hope was beaten to within an inch of life and left for dead.
She lies, unable to move and praying for somebody to find her, as she counts down the minutes and wonders who could have hated her so much to have hurt her so badly.
Was it the man she went on a date with the previous evening, the man linked to the deaths of two other women? Or somebody else, somebody who wants her out of the picture so much they’re willing to kill?
Whoever it is, they will pay. All Ella has to do first is survive …

Gosh, that is one big hook! Despite Ella’s current situation, she sounds quite feisty. Can you tell us a little more about her?

When I first began writing, I didn’t realise for one moment how much I’d love my heroines. But the truth of the matter is, I do…. I create them, I practically give birth to them and then, I throw them out into the big wide world and I allow everyone to judge them. And Ella Hope is no exception.

I began by looking through photographs. I wanted an idea in my mind of who Ella was. This was the picture that matched my thoughts.

She’s young. She’s feisty and the story begins with Ella fighting for her life. My heroine is physically broken, yet through it all she comes over as a very independent lady. The attack has left her needing time recover but her thought process in the first chapter shows that once she’s healed, she’ll be a force to reckon with.

There were so many questions, but the biggest of them all was:

Would Ella Hope be waiting for a knight in shining armour to ride up on his white horse and whisk her off her feet?

Personally, I didn’t think so!

Ella had been through such a lot that I came to the conclusion that she wouldn’t easily fall in love, that she’d bide her time and would be cautious of any man that tried to get close. After all, her FAKE DATE hadn’t ended too well, so I didn’t think she’d be in a hurry to go out with another man any time too soon. I felt that her independence, her determination to survive and her ability to carry on when most would have given up meant that she’d only be happy with a man who was her equal. She needed a man who she could laugh with, cry with and a man who would not only choose her today, but he’d also choose her tomorrow, and the next day, and then again in ten, twenty and in thirty years’ time.

I honestly love my heroine, Ella Hope. I’d be delighted if you love her too…!

All your novels, to date, have been in the Romantic Suspense genre. Where does the inspiration come from to keep the up the suspense?

I wish I knew. As a child I quickly realised that life was not all sunshine and roses. If you talk to most adults, you don’t find many who have had an easy life. There is always one thing or another that happens to spoil it. In my novels I just throw a little more at them than they deserve, whilst trying to keep it realistic.

The only way I can really describe it is that I always make my heroine climb a ‘virtual tree’, I then throw as many apples at her as I can, and I just hope that when she eventually falls, she either has a very soft landing or that my hero saves her. Either way, at some point, she will come crashing down.

This is your fourth novel in just over two years, congratulations! How do you write so fast and what tips can you give to other writers on how to keep the momentum going?

Two of my novels were written before I won the Choc Lit Search for a Star. So, in reality I’ve only written two books since. I work full time as a Sales Director which in itself is a challenging position. Writing more than one book a year would be far too much for me, until I retire of course and then I’d love to write more often.

Thank you again, Lynda, for some great insights into writing Romantic Supsense and good luck with The Fake Date.

Lynda grew up in the mining village of Bentley, Doncaster, in South Yorkshire,

Her own chaotic life story, along with varied career choices helps Lynda to create stories of romantic suspense, with challenging and unpredictable plots, along with (as in all romances) very happy endings.

Lynda joined the Romantic Novelist Association in 2014 under the umbrella of the New Writers Scheme and in 2015, her debut novel House of Secretswon the Choc Lit Search for a Starcompetition.

She lives in a small rural hamlet near Doncaster, with her husband, Haydn, whom she’s been happily married to for almost 30 years.

Lisa Hill writes contemporary romance with a light-hearted tone.  What interests her most is people, their interactions, emotions and relationships.  It’s probably why her career to date has been based in property; she confesses herself that she is ‘naturally curious’. Her first encounter with a romance author was chats over the garden wall between her father, Godfrey, and Mrs Cooper from the neighbouring village of Bisley.  It came as quite a surprise in later life to find that Mrs Cooper was in fact Jilly Cooper!  Lisa’s writing inspiration now comes from other Cotswolds’ authors including Jill Mansell and Katie Fforde. Lisa’s latest novel, Heart in the Right Place, is out now with Manatee Books.
Share this
3 likes
Related Articles
0 Comments