I am delighted to welcome longstanding RNA Member, Ruth Frances Long, to the blog today, being interviewed under her new penname, Jessica Thorne. Jessica’s debut novel, The Queen’s Wing, was published with Bookouture last week. A fantasy romance for teens and YA and a genre Ruth has much experience in, I am keen to know all about her departure into writing under a penname and her advice for writing for this, ever growing in popularity, market… 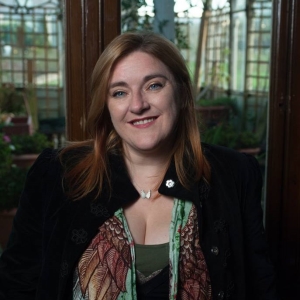 Writing is all about telling stories, fantasy and science fiction even more so. Our earliest stories are all adventures and the word romance comes from the medieval chivalric tradition of courtly love. In these stories knights went on adventures to prove their love for their lady, travelling to strange worlds, battling monsters and encountering wonders and terrors. Perhaps this is why they still appeal and appeal so widely. We all love a really good story.

No matter how fantastic the world we set those stories in, they also need to be realistic. When you write speculative fiction of any kind you’re asking the reader to suspend disbelief. All fiction does this, of course, but it’s even more of an ask with fantasy, science fiction and related genres. Because of that when we’re creating fantasy worlds, paradoxically we need to make them as realistic as possible. I know it sounds contradictory but we’re already asking the readers to believe in things that are impossible. As writers our job is to make everything else as believable as we can in order to help our readers along.  This means looking out for things that don’t make sense, poor story logic, and making our settings as realistic as if we were writing contemporary fiction. I base the imaginary settings on real places I’ve been and make sure to include all the senses when writing about them.

Love and fantasy go hand in hand from the earliest times. What else will people do anything for? What else pushes our heroes and heroines to put their lives on the line, to face the monsters and defeat them? What else is powerful enough to defeat the darkness? My favourite stories have always involved both. I saw Star Wars as a child and that story, with all the elements of a chivalric romance, set in space and across so many amazing worlds, stuck with me. The farm boy on a quest, the princess in the tower, the fallen knight who redeems himself for love… all the elements are there. They even have to fight a monster in a swamp. I’ve always loved space opera. I’m so happy that I now get to write it.

Thanks, Ruth, for a great explanation on suspending disbelief and the meaning of romance; something I didn’t know!

And onto your latest release, The Queen’s Wing. 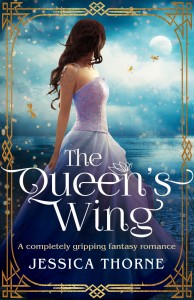 Bel, born to nobility, would do anything to spend her days alongside her brothers – soaring through the heavens in her beloved flyer. She’s faster than any of them, but she knows her days in the skies are numbered.

When a surprise attack on the palace lands Bel’s father on the throne, her life is forever changed. In order to secure her father’s empire, Bel must travel to a distant land to marry the recently widowed young ruler, Conleith.

But Bel’s new home is less than welcoming: compared to the refined ladies at court, Bel seems like a wild woman, and assassination attempts, treason and mystery threaten her at every turn. With a growing attraction to Con, her life is further complicated by the attentive leader of her bodyguards – a warrior called Shae whom she has loved since childhood…

Bel sounds like she’s got a lot to deal with it, be it in the air or on land. How does writing romance in Sci-fi/Fantasy differ from contemporary romance (or perhaps it doesn’t?!) and where do you find your inspiration for such exciting and differing worlds to our own?

I always loved science fiction and fantasy, but these stories always grow out of the world around us, real world things which inspire the fantastic. The ideas come from everywhere. In the case of The Queen’s Wing, I read a book called Queens Consort by Lisa Hilton, in which each chapter examined the lives of a medieval queen of England, and the way queenship changed, the way each woman dealt with such a complex role when it was thrust upon them. I’m really fond of the Steampunk aesthetic and loved Space Opera from Star Warsto Jupiter Ascending. All of these things combined together to create Bel and her worlds. As to how writing Sci-Fi & Fantasy fiction differs from writing contemporary fiction – in many ways they do not. They both need to feel real and be grounded in reality. All fiction is fantasy. If anything fantasy has to have more of a sense of reality about it, grounding it so that the readers can make the leap and believe the unbelievable.

This is your first novel published with Bookouture, congratulations. What made you decide to write this novel under a penname?

Really, it’s because of subtle differences in the stories. Both are primarily YA, and both are speculative in nature, but they are grounded in different things. My books as Ruth Frances Long (The Treachery of Beautiful Things, the Dubh Linn trilogy) are based in fantasy and folklore, whereas the Jessica Thorne books are space operas, set on other worlds. It seemed like a good idea to use the pen name as a way to differentiate between the two types of stories.

The Queen’s Wingis Series Book 1; how many more do you have planned in the series and will we be seeing more of Bel?

We will definitely be seeing more of Bel, but also of other characters, some we’ve met and some who are new. The sequel to The Queen’s Wing is The Stone’s Heart, which is coming out on the 19thFebruary 2019. This will focus on Bel’s bodyguard Petra Kel and comes after events of The Queen’s Wing. It will also feature Bel’s point of view and entwining the two voices was a really interesting challenge. I’m looking at other characters to tell their stories in later books so I’d be interested to see what readers think and who they’d like to hear from. It’s a huge universe and I think there’s lots still to explore.

Thank you again, Ruth, for an insight into writing fantasy and making the unbelievable, believable.

Ruth Frances Long writes young adult fantasy such as The Treachery of Beautiful Things (Dial, 2012) and A Crack in Everything (O’Brien Press, September 2014), the first in a trilogy set in the world of demons, angels and fairies that exists alongside our own in modern day Dublin. The second book in the series is A Hollow in the Hills and the final is A Darkness at the End.

As R. F. Long she writes fantasy & paranormal romance such as The Scroll Thief and Soul Fire. She lives in Ireland and works in a library of rare, unusual & occasionally crazy books.