I’m delighted to welcome Sue Fortin to the blog. Sue’s latest release, The Dead Wife, is out today so I’m thrilled that she was able to come and talk to us about it. 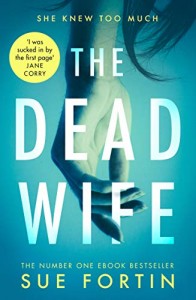 I’m very excited to be here on the RNA blog, especially as today I’m celebrating the release of my eighth book with HarperCollins! The Dead Wife ebook is out now and the paperback, together with audio edition, will follow in September. I’ve been extremely fortunate working with HarperImpulse and more latterly HarperFiction, when they published my debut, a contemporary romance, back in 2013. Since then they have given me pretty much free rein to write in whichever genre I’ve wanted to. I’ve gone from contemporary romance to romantic suspense to psychological suspense and now back to romantic suspense.

It’s been very encouraging for the romantic suspense genre in recent months with the Romantic Novel of The Year award now giving the genre its own category. Romance can often be found in the darkest and most thrilling of novels so it will be really interesting to see what titles are favoured by the reading panel.

What constitutes a romantic thriller and readers’ expectations can vary greatly but, in my opinion, a romantic thriller/suspense needs to have an equal balance of both elements. Lots of books placed in other genres have romance in them to greater and lesser extents but I don’t think an odd relationship problem or a random kiss thrown in as sub-plot could really be classed as a romantic suspense. For me, the romance has to have equal importance and play a part in moving the plot forwards.

When I was planning my novel, I had originally intended it to be a suspense/thriller and set out to tackle it from that angle. However, as I started to write and got to know the characters better, I found the storyline straying further into the relationship side of things than I had originally envisaged. Rather than fight it, I just went with it and at some point it struct me that this had developed into a romantic suspense.

I had always intended to look at the relationship of the family in the story, so it was all slotting into place nicely. I particularly wanted to look at family dynamics and the relationships we don’t always see in public. The story is set in the Lake District where the Sinclair family live, made up of three brothers, Dominic, Harry and Owen, together with their formidable mother, Pru. The family run a very successful holiday resort – think high-end Centre Parc type of place but were struck by tragedy a couple of years earlier when Harry’s wife drowned on the estate. Since then, the resort has been refurbished and the Sinclair family are throwing a launch party weekend for the reporters and reviewers in the travel industry.

Steph Durham arrives as an invited guest but she’s not there just to report on the revamp of the resort – spurred on by a Twitter Direct Message she received, she wants to look into the death of Harry Sinclair’s wife. However, her undercover investigations reveal more than she bargained for and discovers the truth is far closer to home than she ever imagined.

When I was writing The Dead Wife, I wanted to dig deep into the relationship between the Sinclair brothers. On the surface they seem to be all-for-one-and-one-for-all but pick away at the professional and public image and there’s a lot more going on between the siblings. There’s brotherly love, rivalry, honesty and dishonesty – all wrapped up and layered going right back to their childhood.  Added to that, there’s the relationship between my main character and her mother which is strained at times but the bond between mother and daughter runs deeper than either of them realised.

As well as the above, I wanted to make sure I had a strong romantic element running through the story with plenty of conflict on both a personal and professional level. As such, I was continually looking at ways to blend the romantic and suspense elements to keep the story moving forwards on both levels.

I thoroughly enjoyed writing this book and was sad when it ended and I had to leave the characters behind. I think one of the main reasons was because I went back to what I love to read the most – romantic suspense. >

Thanks, Sue it sounds fantastic. Before you go, there are a few questions that I would like to ask.

Your books are incredibly atmospheric. How do you approach researching a new story?

I tend to start with a place I know or have visited and use it as a starting block. I then develop the setting to suit the storyline. I have used real place names before but I prefer to make up names for towns and villages and am always conscious that the name has to sound local – no good putting a Sussex sounding name to a village set in Yorkshire. The internet is a great resource and I research pictures of certain areas for the overall impression I’m trying to create.  Local Tourist Offices are a brilliant way to find out more about an area and can often give you an insight that is not easy to whittle out of the mass of information on the internet.

What were the most difficult things to get accurate in the story?

For me, probably the legal side of things and police procedures. It largely depends how integral these things are to the storyline as to how much research needs to be done and sometimes it’s very hard to get a straight answer from a simple internet search. That’s when it’s important to get professional advice and, in the past, I’ve used the services of ex-police officers who can give me advice, answer specific questions and tell me where I might be going wrong with the plot.

And finally, can you share any plans of what we can expect next?

I have several things in the pipeline – I’m currently working on something I’ve wanted to write for a long time which is very close to my heart. It’s quite different to anything I’ve written before but I hope my agent and editor will love it as much as I do once it’s finished. I also have plans for another suspense and a contemporary romance – both of which are underway in some form or another.

Thank you so much for having me on the blog.

It’s been an absolute pleasure to talk to you. Good luck with the release and with your new project. 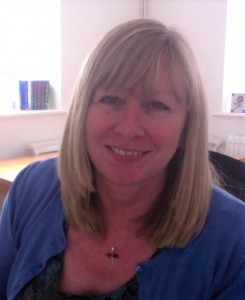 About the Author:
Published by Harper Collins’ imprints Harper Impulse and Harper Fiction, Sue Fortin writes mystery, suspense and romance. Sue is a member of both the International Thriller Writers and The Romantic Novelists’ Association.

Sue is a USA Today and Amazon UK & USA best-selling author, with The Girl Who Lied and Sister Sister both reaching #1 in the Amazon UK Kindle chart in 2016 and 2017 respectively. Her books have sold over a million copies and translation rights for her novels have been sold worldwide.

Sue was born in Hertfordshire but had a nomadic childhood, moving often with her family, before eventually settling in West Sussex.

Sue is married with four children and two grandchildren – when not behind the keyboard, she likes to spend her time with them, enjoying both the coast and the South Downs, between which they are nestled.