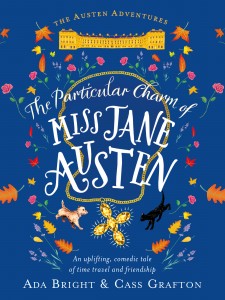 The initial inspiration arose from our friendship. We’d had fun writing together online in the past and, after years of talking about it, we decided it was time to turn this enjoyment into a book.

With Ada living in California and Cass, although British, currently living in Switzerland, we’ve always been amused by what we have in common and yet how easy it is to confuse one another. All we needed to really get our book going was a story to showcase what we’ve experienced and hopefully express how fun and heart-warming it’s been.

The plot was inspired by Cass staying in an apartment in Bath (in one of Jane Austen’s former homes) where she encountered a door without a lock that suddenly became sealed shut and an old iron safe built into a wall. Add a lively dose of our combined writer imaginations and our uplifting, comedic tale of time travel, love and friendship was born:

When a time travelling Jane Austen gets stuck in modern-day Bath, it’s up to avid Janeite Rose Wallace to save her… because she’s the only one who knows Jane exists!

Rose Wallace’s world revolves around all things Austen, and with the annual festival in Bath – and the arrival of dishy archaeologist, Dr Aiden Trevellyan – just around the corner, all is well with the world…

But then a mysterious woman who bears more than a passing resemblance to the great author moves in upstairs, and things take a disastrous turn. Rose’s new neighbour is Jane Austen, whose time travel adventure is sabotaged, and she’s suddenly trapped in the 21st century.

Rose’s life changes instantly – new home, new job, new friends – but she’s the only one who seems to have noticed! To right the world around her, she has to do whatever it takes to help Jane get back home to write Rose’s beloved novels. Because a world without Mr Darcy? It’s not worth living in!

It took us nine months to write, including a few real-world interruptions and several crises of faith in which we weren’t sure we were ever going to finish. The sequel, on the other hand, took only three dedicated months to write and never lent itself to doubt.

We re-write constantly, as that is part of the co-writing process (for us). One of us will throw down the bones of a scene, and the other will pick it up to flesh it out. Then we will each work on it, tweaking things here and there, before moving on to the next scene. In some ways, we are editing as we go, which means we end up with a pretty solid first draft.

Writing Jane Austen as a character! We wanted to respect her, as a real person, and intended for her to remain in the background. We were also wary of being able to capture the dry observational wit, so prominent in both her novels and her letters.

As all writers know, however, characters take on a life of their own, and that’s what happened with Jane. She wanted to be part of the adventure, and so she was!

We did our favourite sort! We met up in Bath – the book’s setting – from our respective countries and spent most of the time talking plot and eating and drinking (which we genuinely considered research, because characters have to eat and drink too)!

We did research Jane Austen’s life to ensure accuracy where possible, but as the book is set wholly in the 21st century, we got off lightly (unlike with the soon to be released sequel, set in 1813)!

Writing the sequel to The Particular Charm has inspired us to stay in this world and carry these characters through at least one more adventure. There is a story arc stretching across all three books, and we’d really like to draw it to a conclusion, so that’s our prime focus. Then Ada is finishing up a romantic mystery she’s really excited about, and Cass has just completed a contemporary romance set in Cornwall and is currently writing the next in that series and trying (and failing) to keep at bay two other book ideas battling for space in her head.

Thank you so much for talking to us. I’m really pleased to hear  that there will be a sequel, and look forward to seeing more of your books. 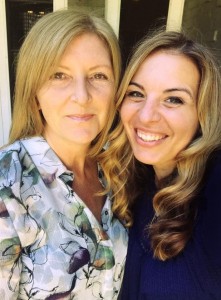 A dedicated bookworm since childhood, Cass writes the sort of stories she loves to read – heart-warming, character driven and strong on location, and the setting of her novels often becomes as much a part of the story as her characters. She leans heavily towards the upbeat and insists on a happy ever after. As one of her favourite authors, Jane Austen, once wrote, ‘let other pens dwell on guilt and misery’. Cass loves travelling, words, cats and wine, and splits her time between Switzerland, where she lives with her husband, and England, where she lives with her characters.

Ada has lived all her life in Southern California, which makes her intolerant to any weather above or below 72 degrees Fahrenheit. She grew up much fonder of reading than sports or socializing and still tends to ignore everyone she loves, all her responsibilities and basic life needs when she’s in the middle of a book. She is luckily married to a handsome and funny man who doesn’t mind that the laundry never gets put away and has three amazing children. Ada spent over a decade as a photographer before dedicating herself to writing, though she still believes life should be documented well and often. There is nothing she loves more than a good, subtle love story whether it be in real life, tv, movie, theatre or book form… well, except cake. She also really loves cake.

Where to keep up with Ada and Cass: