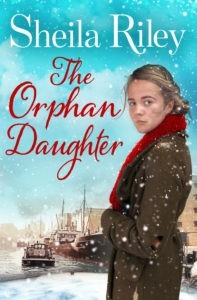 Evie Kilgaren is a fighter. Abandoned by her mother, and her father long gone, she is left to raise her siblings in dockside Liverpool as they battle against the coldest winter on record.

But she is determined to make a life for herself and create a happy home for what’s left of her family.

Desperate for work, Evie takes a job at the Tram Tavern under the kindly watch of pub landlady, Connie Sharp. But Connie has problems of her own when her quiet life is upturned with the arrival of a mysterious undercover detective from out of town. When melting ice reveals a body in the canal, things take a turn for the worst for the residents of Reckoner’s Row. Who could be responsible for such a brutal attack? And can Evie keep her family safe before they strike again?

A gritty, historical family drama full of laughter and tears from the author of Annie Groves’ bestsellers including Child of the Mersey and Christmas on the Mersey. Perfect for fans of Lyn Andrews, Katie Flynn and Nadine Dorries.

THE ORPHAN DAUGHTER will be published on 5th September 2019.

I’m delighted to welcome Sheila Riley to the blog Hot Seat today to talk to us about her new book, The Orphan Daughter. Sheila, can you talk to us a little about the inspiration behind the book?

I am captivated by the immediate post-war period and how people managed to cope when rationing was still in place, up to nine years after the war ended. I also love a mystery and try to solve it before the end of the story, but as yet, nobody has worked out the twist at the end of The Orphan Daughter. I’m quite proud of that.

How did you decide on the names for your characters and the setting for your book?
I love this part of the process. Baby name books are a treasure to behold. Also, the names of herbs, flowers, everyday objects, anything can be used to make a name – even days of the week.

How much re-writing do you do?
I had a good idea of the storyline before I wrote it. I wrote a few drafts until I was happy, and the story as it is now evolved. However, nothing gets wasted. All the bits of story I cut out of the original story are left on my hard drive and will be used in another story.

What is your writing day like?
I wake up with ideas for plots and characters etc, and I like to get them down as soon as possible. If I am in the planning phase of a book I have been known to get up about four or five to write. If the story is going well I don’t like to leave it.

Without giving too much away, what was the hardest part of the book to write?
I can’t tell you that because it would give away the mystery. 😊

What kind of research did you do before beginning the book?
Because I had done a lot of research on my Annie Groves books, which were set in WW2, I was familiar with the time in which The Orphan Daughter took place. The research I gathered gave me some great backstory for my characters. I have books on forties and fifties fashions etc, and I also managed to purchase original copies of Picture Post magazines from the immediate post-war era, which are a font of brilliant ideas.

When did you realise you wanted to be an author?
I don’t think it was a conscious decision, I was always making up stories and inventing characters, even as a child. I was an incurable daydreamer.

What was your journey to publication?
I saw an advert in my local library for a writer’s workshop. With much trepidation I took the plunge and enrolled. I knew nothing about the etiquette of sending out stories, and didn’t give it a thought that somebody would pay me to write stories. I had a few supernatural short stories and was encouraged to send them to Woman’s Own, who published them. This boosted my confidence and I decided to try longer projects. Then I read Mary Wibberley’s book, ‘To Writers With Love’ where she mentioned The Romantic Novelists Association – and the rest, as they say, is history 😊

Which fictional character(s) would you like to invite to dinner?
What would you like to talk about?  I would like to invite Sarah Agnes Prine, whose wonderful story was told in diary form in the novel: ‘These is my words: the diary of Sarah Agnes Prine, 1881-1901’ written by Nancy Turner. Sarah is a seventeen- year old tomboy, who is brave, strong and determined, and she needs to be when her father decided to move the whole family and their horse ranch from Arizona to Texas in 1881. She endures so much, but her heart’s desire is to be educated. She also longs to be loved. Agnes meets her destiny in the shape of Capt. Jack Elliot. I would love to ask if, given the chance, would she do things differently?

Who were your favourite childhood authors?
I have a very eclectic taste. In childhood novels. Enid Blyton, obviously. The Malory Towers series was a favourite. I also loved Edgar Allen Poe’s Tales of Mystery and Imagination, terrifying the life out of myself before I went to sleep each night. No wonder I used to sleepwalk! I also loved Alfred Hitchcock mysteries. Jeeves and Wooster, Little Women, Jennings (I think I may have wanted to go to boarding school 😊 )

What book do you wish you had written?
Eleanor Oliphant Is Completely Fine, by Gale Honeyman. The success of that book is phenomenal!

If you could give your younger writing self any advice, what would it be?
Keep your diaries! Believe in yourself.

What advice would you give to aspiring authors?
If you think you can – then do it now. Don’t wait. Practice makes perfect.

Can you tell us what you are working on now?
I am writing the second of three in the Reckoner’s Row series. These gritty family sagas are set in a close Mersey dockside community, where everybody thinks they know their neighbours, but every household has its secrets…

Sheila Riley wrote four #1 bestselling novels under the pseudonym Annie Groves and is now writing a new saga trilogy under her own name.

The Orphan Daughter is the first in the Reckoner’s Row series set around the River Mersey and its close dockland community near to where she spent her early years.

Where to find Sheila’s books: