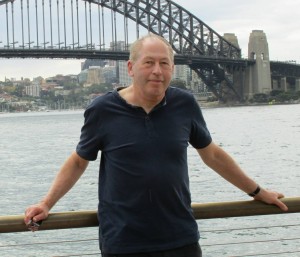 Let’s face it, when it comes to the romance genre, women dominate. Most romance writers are female, as are most readers. Plots commonly centre on the female point of view, though I have noted that a ChocLit criterion for consideration is a strong male protagonist. Although I don’t have the figures for the breakdown between female and male members of the RNA, judging by the events I attend, I’d guess it’s around 95 versus 5 percent.

Time for a confession: my name is Richard and I’m a coward. I’m usually placed in the romance genre and a renowned agent suggested that I use a female pseudonym to increase readership. “No way!” I declared with bold pride, “people are going to have to accept me for who I am.” That gloomy winter evening, I considered Rebecca, Rosemary, Rachel and Rita before opting for the cowardly compromise of using R J instead of Richard.

Why do so many men shy away from writing and reading this genre? After all, romance is all about relationships and around half of those involved in them are going to be males.

Firstly, it’s the word itself. Although romance is a broad category, (Amazon lists about twenty widely differing sub-genres), when I chat with male friends they have a simplistic perception of lovey-dovey writing around “a dream come true”, “in search of my soulmate”, “you’re the one for me”, and surely, if the writer’s a male, he must be gay!

Secondly, it’s the cover, that all-important first step for a reader when deciding what to buy. Despite the diverse range of sub-genres, covers (admittedly, not all) tend to be limited and formulaic. Amazon best seller lists largely consist of jokey styles (RomComish and ChickLitish) or photos of hunky men and/or swooning women. How many of the high-ranking novel covers shown below would entice a male reader?

Since the majority of fiction readers are female, there are plenty of potential readers (and authors) out there perfectly happy with the current status quo. But it does leave a sizeable untapped market with male authors like me searching for a pitch.

Initially, I self-published, using the first row of matching covers below to suggest that all was not well within my characters’ relationships. When Accent Press took on my novels the covers went through a radical change, as shown in the second row. Though not in love with the design, I decided to retain this style when I self-published Jack and Jill went Downhill, (as in “Author as Brand”). 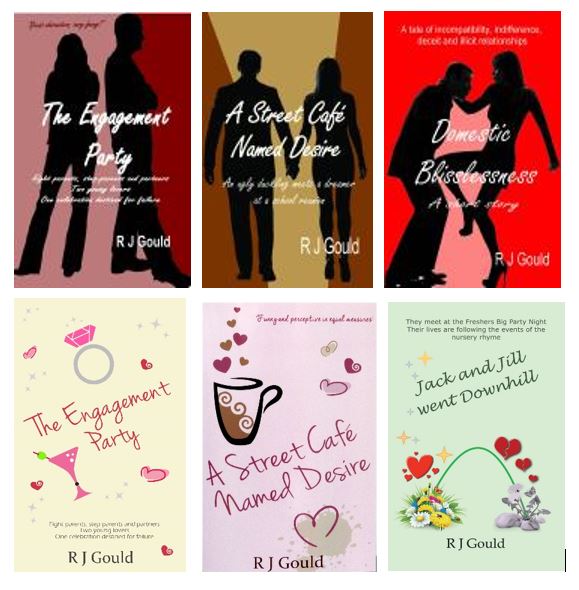 Endeavour Media agreed to publish Jack and Jill went Downhill and we began to consider cover. I was keen to move away from the previous look. Although the end result bears little resemblance to my original idea, I’m delighted with the outcome – its simplicity and clean lines – and I’ll be using a similar design for two novels ready to go. I realise that if attraction to the cover really is the vital first step for the reader in deciding whether to investigate a novel further, ultimately the test of impact is going to be number of sales. Are female romance readers going to be attracted to a cover like this? 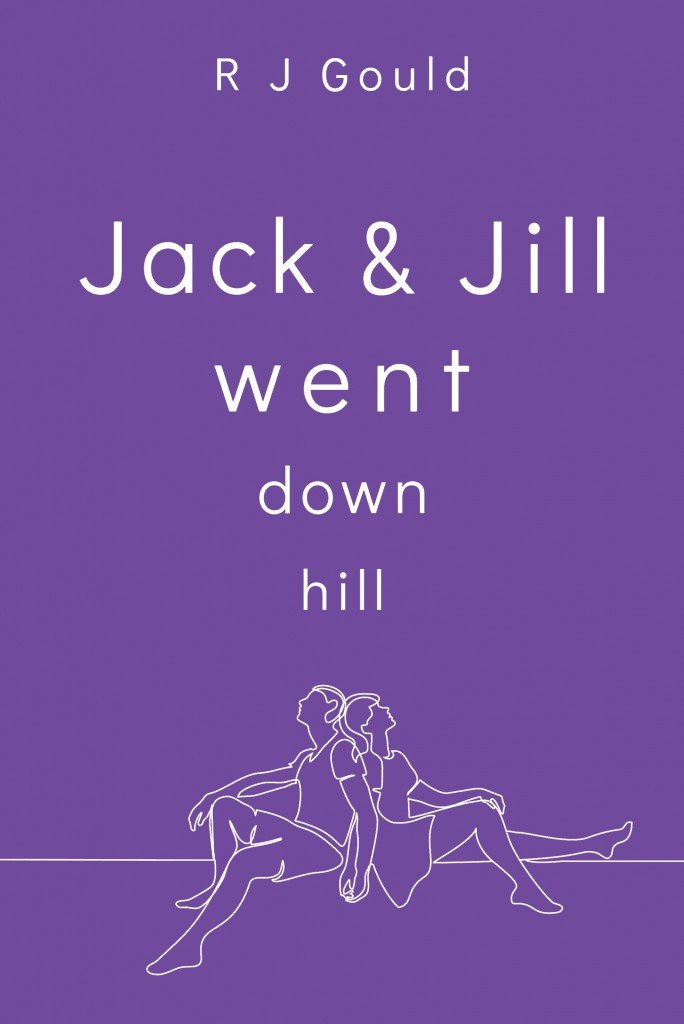 How accurate is my hypothesis that the word itself and the types of covers adopted are the prime barriers to more men reading romance? Obviously quality of content is paramount, but for that to be tested, the reader needs to open the book and start reading.

Why do I write romance? Actually, do I write romance? Well, I certainly love writing about relationships, using humour, pathos and social commentary to describe the tragi-comic journeys of protagonists in search of love, that fundamental need for all of us, male or female. My readers, definitely substantially women, tell me that a male perspective on romance provides interesting new insights.

My novels feature insecure non-alpha males, (defining alpha in traditional terms associated with power and arrogance; men who need “taming”), in search of the women of their dreams. I think I’m reflecting an emerging reality. We still aren’t there yet, there remain inequalities, but I’m pleased to depict male characters who are far more emotionally intelligent and supportive than in any previous generation. Equally, the alpha females they encounter can well be more powerful, sexually and socially confident, and financially successful than their male counterparts, women who take the lead in starting, maintaining and ending relationships. In my novel Jack and Jill went Downhill, the female lead is alpha plus while Jack is far removed from “new man” – he has a considerable journey to undertake before reaching that point.

How can we get more men to read a genre that reflects such an important aspect of life, one that fulfils, enrages, engulfs, and quite possibly destroys? Answers on a postcard!

Richard Gould is a graduate of the New Writers’ Scheme. In addition to the Romantic Novelists’ Association, he is a member of Cambridge Writers where he leads the Commercial Editing Group. A Street Café Named Desire was published in 2015, The Engagement Party in 2017, and Jack & Jill went Downhill in 2019.

Richard has worked in schools, universities and has led a national educational charity, and has been published in a wide range of educational journals, newspapers and magazines. Although he enjoys writing non-fiction, his true love is as an author of novels that make the reader reflect on the idiosyncrasies of everyday life.

He lives in Cambridge. Apart from writing and reading, he enjoys playing tennis and watching films, especially film noir, and he has a minor addiction to dried mango slices.