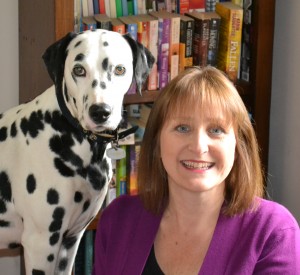 Diane Saxon lives in the Shropshire countryside with her tall, dark, handsome husband, two gorgeous daughters, a Dalmatian, one-eyed kitten, ginger cat, six chickens and a lazy black Labrador puppy called Beau – a name she stole for her hero in For Heaven’s Cakes.

After working for years in a demanding job, on-call and travelling great distances, Diane gave it all up when her husband said “follow that dream”.

Having been hidden all too long, her characters have burst forth demanding plot lines of their own and she’s found the more she lets them, the more they’re inclined to run wild.

What made you decide to change from writing romance to a psychological thriller.

For as long as I can remember I’ve read prolifically both romance and thrillers. At the age of fourteen I was sneaking off to my sister’s bedroom to read my mum’s Mills & Boon and then I discovered my dad read Wilbur Smith and Sidney Sheldon. My older sister Margaret is the best book selector you could imagine. She’s never chosen a bad book and I simply read whatever she recommends and they always vary between hard-bitten psychological thrillers, romance, and fantasy.

When it came to writing, my first instinct was to start a thriller, which I did. I then had an operation on my foot and found myself unable to move for two weeks and unwilling to read or write anything dark. That’s when I wrote my first romance. Fifty-thousands words. I was supremely lucky in that Liquid Silver Publishing took Loving Lydia straight away and kept asking ‘what’s next?’. If you read the opening chapter of Loving Lydia, though, you’ll find it’s not for the faint-hearted.

Last year I felt the absolute need to write the thriller in my head. It just wasn’t going away.

Writing Romance novels can be a beautiful escape for author and reader. How did ‘The Keeper’ effect you? Reading part of it I was scared, genuinely scared, did you find yourself waking in the night?

Yes. A scene develops while I’m in that half-awake state at 3:00 am and I get up and write it downstairs in the dark. Do I scare myself? A little, but my mind pushes to take it one step further. I always have the comfort of my dogs by my side.

I’m the sort of person who if I see something peculiar in the woods, I won’t run away and report it, I’ll get a stick and poke it to see what it is.

Did you plan ‘The Keeper’ or did It develop organically.

To a great extent ‘The Keeper’ developed organically while I was taking long, lonely walks with my Dalmatian, Skye, through the Ironbridge Gorge near where I live. I remember the day ‘The Keeper’ took root. I heard a noise in the hills above me and just like Fliss, I froze. Unlike Fliss, I saw a herd of deer in the autumn woodland and as I stared at them, their wonderful camouflage made them disappear before my eyes. And that’s when I wondered: what if that was a human, not a herd of deer? What if they’d done something so evil, they couldn’t let you go?

Once I had the skeleton of the story in place, there was far more planning to pull it into the right structure that I needed for a thriller. Book 2 I found much easier to plan as I started out with the structure already in place. The trouble is I am character driven and if they go off at a tangent, I tend to follow them.

There is a male detective who’s quite a central character, is there a romantic link between him and Jenna.

No. There will be relationships, but Jenna and Mason are not for each other.

Do you think that living with a retired policeman has helped you establish how incidents like this are investigated.

Not really, I just think I have that kind of mind. When my children were little, I taught them always to have an exit plan. A defence. I think this comes from my upbringing. My dad was in the RAF and we lived in Zambia and Germany. We had so much freedom as children, but we were taught that with that freedom comes an essential need for awareness of your surroundings and danger. Mum and dad went to Africa with four children and managed to come back with the same amount.

The psychological crimes are totally of my imagination, but I do nudge hubster in the middle of the night to query about the technical side of the investigations. Most the time he tells me I can’t, or it wouldn’t happen that way…

In addition to this, I’m a huge researcher. I did an on-line university forensics course so that I have a basic understanding of techniques and I love to get to the bottom of any mystery.

You perfectly articulate how the attacker is thinking. How did you manage to get into the mind of how a violent sociopath thinks and how much research did you need to do.

I’ve always been interested in serial killers and watch programmes about them, but when it comes to getting into the mind of a violent sociopath, it’s more that the character got into my mind. Up until a couple of years ago, I would never swear – seriously, I just didn’t, but my killer does. Just as it’s his voice swearing, it’s his thoughts and deeds that move the story forward and I just let it flow. I promise, I haven’t buried my grandma anywhere!

Most detectives are flawed. Does Detective Sergeant Jenna Morgan have any flaws? If she does, can you tell us what they are?

With Jenna, I didn’t want the cliché of her being a female in a male dominated world having to fight her way to the top, which is why she’s already an established Sergeant and comfortable in that skin. She’s good at her job and well respected. I also didn’t want the other cliché of so many detectives who are portrayed as heavy drinkers. I’m not sure I’d classify her as having flaws, but she is ultimately human and the disappearance of her sister brings out emotions and shows a deep vulnerability to her personality.

This is being described as a series – so what is next for Jenna?

I have a four-book deal with Boldwood Books for Jenna Morgan and her team. Book 2 has just come back from my wonderful editor Caroline Ridding and all I can say right now is Jenna, Mason and Ryan are faced with a horrific murder which bears too close a resemblance to one committed years before. The title is likely to be Copycat.

I would love to see ‘The Keeper’ become the next Psychological TV drama. Who would you choose to play Jenna.

I’d love to see ‘The Keeper’ as a TV Drama too, so if you have any contacts…

I quite like the idea of Emilia Clarke for my main character, DS Jenna Morgan

And Elizabeth Olsen for Felicity Morgan, the younger sister

What is next for you. Will you write more romance novels for are you now hooked on Psychological thrillers.

Right now, my absolute priority is my thrillers.

I’m currently in edits with Copycat which will be published in March 2020, and I’ve just started writing Book 3 which needs to be with Boldwood by March 2020. It took me 4 months to write Copycat, so looking at that schedule again, at 100,000 words, I don’t think I will have much time to write a romance in between, but you never know. It’s Nanowrimo soon and I do tend put a spurt on for that.

I have the last book in my Atlantic Divide (romance) series almost complete and I will finish that at some point. I also have a lovely paranormal book at around 50k words that I have on the back-boiler. If I can write it in two weeks like I did with Loving Lydia, then why not?

Thank you very much for inviting me to take part in these wonderful Q&A’s I’ve really enjoyed myself. 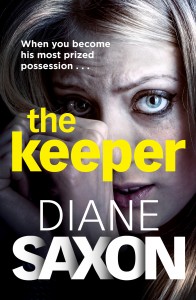 On fast response to reports of screams being heard in the Ironbridge Gorge, Detective Sergeant Jenna Morgan discovers it’s her own sister who’s in trouble. First on the scene, Jenna and her partner, Detective Constable Mason Ellis, start a frantic search, initially believing she may have slipped down The Gorge into the perilous River Severn.

In the pitch-dark, along the disused railway line, Jenna finds something far more sinister as she discovers not only Fliss’s severely injured Dalmatian, but the naked and tortured body of a woman.

In a dismal cellar, and badly injured, Fliss realises she’s been kidnapped by a psychopath who takes pleasure in inflicting pain whilst acting under the pretence of a caring doctor. Rescued her entire life by her older sister, Fliss knows her only hope is to rely on her own wits and determination to save herself.

Despite the conflict of interest with the investigation, as first on scene, Jenna’s involvement is paramount to the case. In a move designed to protect both her professional reputation and the case’s integrity, Chief Crown Prosecutor Adrian Hall is assigned to shadow her and ensure continuity of information.

After days of being subjected to torture and the dark threat of even more sinister retribution, Fliss escapes the confines of the cellars She makes a break for freedom with the knowledge that the man who held her incarcerated knows her sister. The hunt is on to find out who he is before he comes after her.

Diane Saxon lives in the Shropshire countryside with her tall, dark, handsome husband, two gorgeous daughters, a Dalmatian, one-eyed kitten, ginger cat, six chickens and a lazy black Labrador puppy called Beau – a name she stole for her hero in For Heaven’s Cakes.

After working for years in a demanding job, on-call and travelling great distances, Diane gave it all up when her husband said “follow that dream”.

Having been hidden all too long, her characters have burst forth demanding plot lines of their own and she’s found the more she lets them, the more they’re inclined to run wild.