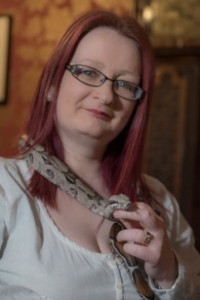 Today I would like to welcome self – confessed mathematics geek, Emily Royal. Emily  grew up in Sussex, and has always had a passion for romance and alpha heroes. After graduating from Oxford University, and enjoying a brief dream of becoming an airline pilot, she started a career in financial services in order to indulge her love of mathematics.

She now lives in rural Scotland with her husband, two daughters, and a menagerie of pets including Twinkle, an attention-seeking boa constrictor.

When not working on algebra or keeping Twinkle from slithering over her keyboard, Emily enjoys cooking, painting, target sports, and playing the piano. She can often be found wandering about the hills of Scotland looking for inspiration.

Roderick’s Widow is the third book in my Regency series. The inspiration came from the main character, Alice. She was a secondary character in Hawthorne’s Wife, the second book in the series, and I didn’t like her much. I never meant to write her story, but I couldn’t get her out of my head. I love the idea of characters who aren’t likeable at first, but your opinion changes when you understand their story. In Hawthorne’s Wife, Alice breaks off her engagement to Ross, a respectable businessman, in favour of a duke. Roderick’s Widow covers the events after Alice’s first husband has died. It’s pretty dark because Alice spent time in an asylum after her abusive marriage, and she’s now the subject of gossip. When she meets Ross again, at the start of Roderick’s Widow, he’s still bitter about her rejection.

Roderick’s Widow was one of the fastest books I wrote! The plot came to me pretty much overnight. I woke up one morning and jotted it all down in my notebook. Overall, the first draft took 6-8 weeks to complete. I went through one major revision after my beta-reading buddies gave me feedback, where I cut an overdramatic chapter and moved some other scenes about, then a second revision to add a couple of scenes on my editor’s advice.

It varies! I work long hours on the day job and fit writing in evenings and weekends. I’m often away on business and find hotel rooms, airport lounges, trains and aeroplanes good places to get a few words down. Little and often is the key. Occasionally I’ll meet a friend for a writing session. We’ll start with coffee, then write in silence for a couple of hours, then have lunch! If I have a day free for writing I’ll aim to write 5,000 words, usually in two sessions.

I relish writing scenes which are dramatic, dark and emotional, and I love writing romantic scenes! From a technical viewpoint, the hardest scenes for me to write are the lighter scenes. I have to keep reminding myself that readers don’t want big emotions all the time. I won’t give any spoilers, but I always feel guilty when I kill off a character, and I found it emotionally tough writing the scenes when Alice struggles with memories of her past.

This is the third book in the series so I’d already read a few books about the Regency era to get a feel for lifestyles. While editing I checked some of the finer detail, such as specific historical events referred to in the story and whether what the characters were eating was authentic (ie no Coco Pops in a Regency breakfast room…).

When I was about 10, I knew I wanted to write romantic fiction, but was told I’d have no chance of getting published and that I should “focus on getting a proper job instead.”

Twisty and turny! I joined the excellent New Writing Scheme in 2015 and landed an agent later that year. Then followed three years of rejection on two books which my agent tried to sell. We parted company early 2019, but in the meantime I’d been submitting to publishers directly, with my agent’s blessing, as well as writing more books. In 2019, everything came together at once and I landed three different publishing contracts, with four books published in 2019 and a fifth due out later this year.

I loved Enid Blyton’s school stories when I was a child. Boarding school sounded such fun with all those midnight feasts, tricks on the teachers and lacrosse matches at weekends. And I hit Nirvana last year when my youngest daughter played a lacrosse match at the school reported to be the inspiration for Malory Towers and I took her and her friend for tea and ice-cream afterwards! When I was in my teens I devoured William Horwood’s books. The Duncton Wood series was great, but my favourite book of his is Skallagrigg, which is heart-rending and emotional, but I love it.

Ignore adults who try to tell you what you can’t do!

Keep writing! Rejections suck, and waiting to hear from submissions sucks even more. So push them out of your mind and focus on writing the next book. Careers are not built on one book, so you might as well crack on with drafting the next.

If I’m allowed a second piece of advice I’d say write what you love, not what you know. Knowledge can be gained through research, but if the passion’s not there, it’ll show in your writing.

I’m really excited about this! It’s the fifth book in the series and features a wealthy banker who, incidentally, is renting the country estate of Alice’s late husband. During a game of cards, he’s tricked into marrying a viscount’s illegitimate daughter. I love a marriage-of-convenience, enemies-to-lovers story! I used to play a lot of chess as a child, and I’m using chess references in this story, with the heroine being a bit of a chess genius.

I work on more than one project at a time, so I’m also plotting out the sixth book in the series where the hero is a scarred war veteran who’s a cross between Cyrano De Bergerac and Batman – in Regency London. 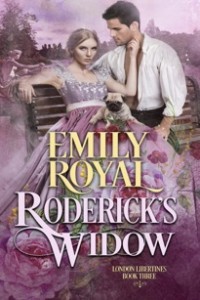