Congratulations to the contenders for the Books and the City Romantic Comedy Novel Award:

A Question of Us, Mary Jayne Baker, Aria Fiction, (Head of Zeus) 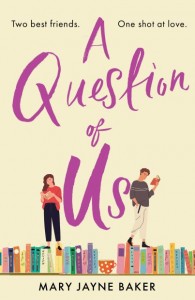 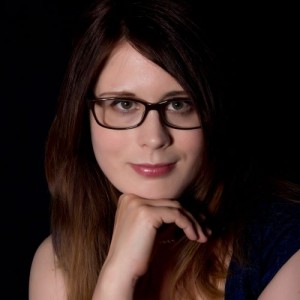 Twentysomething Clarrie’s pub quiz team is the sole bright spot in her messy life — but one daring bet could change everything. If her team wins the league, Clarrie has to go on a date with her playboy best friend, Simon. But could that be what she’s wanted all along?

What was your inspiration for A Question of Us?
This book is very close to my heart. I aspired to write a romcom set in a traditional working-class community in West Yorkshire, similar to the one in which I grew up, with characters who belonged to home and who felt real and authentic. It was very much inspired by my own working-class northern background and the area in which I live.

How does it feel to be a contender for the Romantic Novel Awards 2020?
I’m flattered and thrilled to have made the shortlist for the RoNAs again, and to see my name alongside such an array of talented authors is a true honour. Good luck to all those nominated! 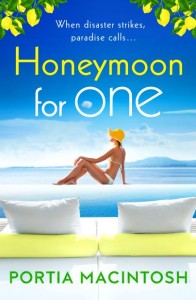 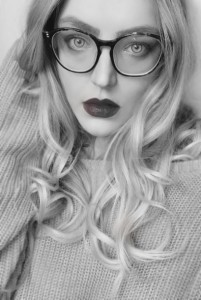 Romance novelist Lila thinks she has wedding planning all figured out … until her own wedding goes horribly wrong when she catches her fiancé kissing someone else. With no idea what else to do, Lila decides to go on honeymoon on her own – even if it is a resort for couples.

Where did the inspiration for Honeymoon for One come from?
I was a music journalist who used to tour with bands. I started writing novels as a way to tell my stories anonymously. I soon realised I loved writing fiction more than I loved writing about musicians and I’ve never looked back. My first novel was inspired by my tour stories, after that I started writing romcoms. Honeymoon For One is my 12th publication. By March 2020 I will have 15 titles published.

How does it feel to be a contender for the Romantic Novel Awards 2020?
It’s such an honour to be shortlisted for an RNA Award – it’s every romance author’s dream. 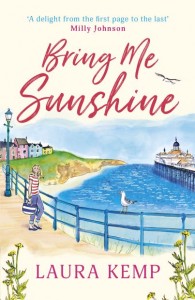 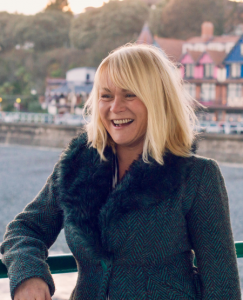 Timid Charlotte Bold just wants a quiet life. But when her London radio desk job is relocated to Sunshine FM in Mumbles, she discovers she’s the new DJ. Love, lonely listeners and friends new and old are depending on her – can Charlotte learn to seize the day?

What inspired you to write Bring Me Sunshine?
I moved to Wales from England twenty years ago for work and had a bit of a shock. Strangers talked to one another! People ordered ‘half-and-half’ curry, having both rice and chips. And they thanked the driver when they got off the bus. The country is blessed with huge heart, stunning mountains and beaches, its own language and a very strong sense of community, all of which inspired me to set my novels here.

How does it feel to be a contender for the Romantic Novel Awards 2020?
I’m absolutely thrilled – and agog – at being shortlisted! I have always dreamed of being nominated but never thought it would happen. It’s enough for me to be on the list, it feels like a massive win. And it’s a joy to be in such great company too!

A Cornish Cottage by the Sea, Jane Linfoot, (One More Chapter, Harper Collins) 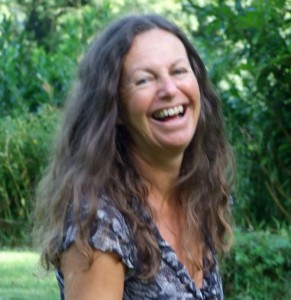 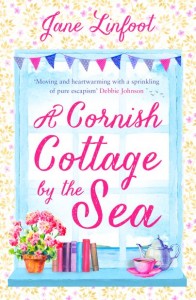 Those who don’t jump will never fly…
Hurtling through the sky was supposed to be Edie Browne’s flight of independence. But instead it changes her life forever. As Edie relearns the basics under the watchful eye of an entire Cornish village she finds love and joy she never could have imagined in the unlikeliest of places…

Where did the Inspiration for A Cornish Cottage By the Sea come from?
Cornwall is bursting with picturesque seaside places to use for inspiration for backdrops to stories, whether it’s the sweeping curves of the long sandy bays, or the hotch potch of white and pink houses clinging to the hillsides above harbours filled with brightly coloured bobbing fishing boats. But I also love Cornwall’s changing faces – that the aching blue of summer heat and shimmering sea can so easily flip to stormy black waves, pounding against the cliffs.
The summer I wrote the first draft of the book my lovely mother in law and the very old family dog were both really ill, and I think a lot of that emotion became embedded in the story. It’s a story about a heroine who’s had a stroke, and writing in the first person I did find myself taking on the characteristics of the heroine. I spent the whole summer wearing dark glasses and panicking if bright light got in my eyes.
With this book writing the words was only half the story – when it went out into the world and unexpectedly gave a voice to people who hadn’t been heard before, then it became whole.
One of my proudest moments was when a quote from the book was put up on the wall as inspiration for patients on a stroke ward.
The book was very much a collaboration with my editor and agent. It was tough to get right.

How does it feel to be a contender for the Romantic Novel Awards 2020?
I was dancing in the kitchen. It’s a huge honour to make the shortlist, I’m so proud that it’s with a story that unexpectedly gave a voice to people who hadn’t been heard before. 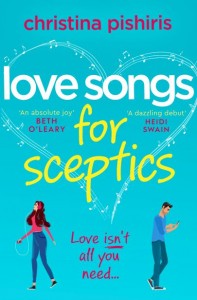 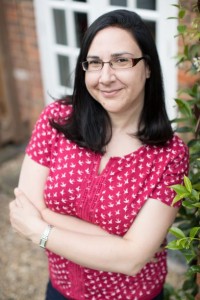 When she was a teenager, Zoë fell in love with Simon, her best friend and the boy next door. But his family moved to America before she could tell him how she felt. Now, 20 years later, Simon is back in London, newly single and as charming as ever . .

Where did the inspiration for Love Songs for Sceptics come from?
I’m dreading my parents reading the book because, just like my main characters Zoe Frixos, I come from a Greek Cypriot family and some of the conversations that my fictional parents have in the book will sound AWFULLY familiar to my real parents. (Especially discussions about watermelons.) Sorry Mum and Dad!

How does it feel to be a contender for the Romantic Novel Awards 2020?
So incredibly thrilled and honoured to be shortlisted especially among such talented company.