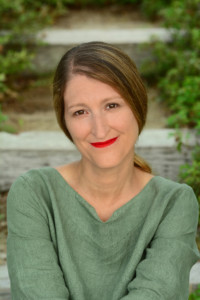 Today I am delighted to welcome, Vice President of the Romantic Novelists’ Julie Cohen. Julie’s novel, THE TWO LIVES OF LOUIS & LOUISE is being adapted for film this summer. Her novels have been translated into seventeen languages and sold a million copies worldwide. Her books TOGETHER and DEAR THING were both Richard and Judy Book Club picks. She teaches creative writing workshops for The Guardian, Literature Wales, and Writers’ Workshop, among others, is patron of local literacy charity ABC to Read, who help children in Berkshire primary schools learn to read and she runs her own fiction consultancy and mentoring business.

How on earth do you manage to fit all of this in. You must be super organised. How do you prioritise?

I’m lucky enough to write full time, so at least I’m not juggling the day job too! During normal days I tend to stick to scheduled writing hours, and I try to keep things like emails or planning courses to the mornings and evenings. I’m a great believer in making lots of checklists, which helps me anyway because my memory is not what it was.

I can only imagine how incredible it must have felt, getting the call to say your book was going to be given the opportunity to be adapted into a film. Where were you when you got the call? What did you do once you’d heard?

It first came with an email from my film and TV agent, saying that there was an Oscar-nominated director, Lisa Jane Larsson, who was interested in optioning Louis & Louise. She was based in Stockholm so she wanted to set up a telephone call. Providentially, I was due to go to Stockholm to teach at a writers’ conference the very next week! So we arranged a meeting. It had to be kept totally secret, so I told no one at the writers’ conference, and slipped out one evening. I met Lisa and her director of photography in a very busy bar and I was immediately impressed. She had an amazing vision for the film and a real understanding of the characters and the ideas in the book. I came away dazzled—and unable to tell anyone what had just happened! Soon after, Enderby Entertainment came on board and I met with producer Rick Dugdale in London. I had to keep everything secret until Enderby announced the news.

Will you have input with the film or do you have to just let it go?

I’m hoping to see a draft script very soon, and the producers are keeping me up to date with everything that’s happening.

‘Despite not being able to draw, I’m also the official cartoonist for the Sherlock Holmes Journal.’ Are you being modest or can you really not draw? How did this happen?

I’m not a very good artist and I am very aware of my shortcomings! But I am very knowledgeable about Sherlock Holmes. I joined the Baker Street Irregulars when I was a teenager and I’ve been an enormous fan for most of my life. For five years I did a biannual comic, ‘Overrun By Oysters’, for the Sherlock Holmes Journal, though I’ve had to quit recently because I’m just too busy. My cartoons might not be very artistic but they are super geeky with obscure jokes that only fellow Sherlockians will appreciate. It’s a niche talent.

You have a Master of Philosophy degree on fairies in Victorian and Edwardian children’s literature. This sounds captivating and rather different. What was it that made you choose to do this?

It was related to Sherlock Holmes, actually! In 1917, Arthur Conan Doyle was involved in the strange case of the Cottingley Fairies—the famous fake photographs of fairies that were taken in Leeds. I’d always been fascinated by that case and I decided to use it as a springboard to research the significance of fairies and their links to idealised images of children and childhood in that era. On a related topic, my next novel, SPIRITED, which is out in July, is a Victorian historical which also touches on some aspects of those faked supernatural photographs.

You have an inexhaustible generosity when it comes to helping aspiring authors. Your website offers help, tips and advice, how do you still make time to help others? Did you get help yourself from other authors?

Before I was published I had an enormous amount of help from successful authors, both in the RNA and elsewhere. I don’t believe I would have become published without the encouragement of professionals who were generous with their time and knowledge. Every single one of those authors told me they had received help before they were published, and by helping me they were paying it forward. So whenever I can help an aspiring author, I’m paying my debt to the amazing authors who helped me.

Your recent weekly diary which details the process of writing your current novel is candid and packed with so much information.  ‘Imagine sending a text to someone you really like…and waiting two years until they answer you. That’s the level of self-doubt we’re talking about here.’ You seem to have a wonderful knack of seeing things and putting them across, have you always been insightful?

I don’t think I’m particularly insightful, but I do think that I’ve written a heck of a lot of books, so I’m very familiar with the process. I’m extremely familiar with self-doubt. And I do think that it’s liberating to know that all authors—all creative people generally—have the same types of fears. I’ve always said that writing is a process of tricking yourself into not being afraid. I think it’s good to share strategies to achieve this. So that’s why I started the weekly novel writing diary—to be honest about my own struggles, so that maybe other authors or creatives can see that it’s normal and that there are ways of coping. All of the entries can be found here in my Medium publication, Write Here. Write Now. https://medium.com/write-here-write-now

Do you get fan mail? What’s the strangest gift or correspondence you’ve received from a fan?

I do get fan mail, though generally these days it’s more in the form of tweets or Facebook messages or Instagram stories. But sometimes it’s emails, and sometimes it’s even handwritten notes. There was a stage where I was obsessed with knitting little toy owls, and occasionally a reader would knit me an owl and give it to me at an event. I love those owls! I put them on my Christmas tree every year. It’s one of the best parts of being an author—knowing that your work has moved someone enough for them to write you a message, or even knit you an owl. 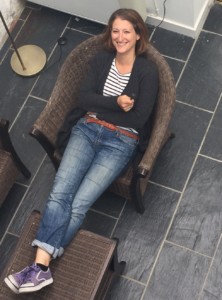 Julie Cohen grew up in Maine and studied English at Brown University, Cambridge University and the University of Reading. Her award-winning novels have sold over a million copies worldwide, and she has twice been selected for the Richard and Judy Book Club in the UK. Julie runs an oversubscribed literary consultancy which has helped many writers go on to be published. She is a Vice President of the Romantic Novelists’ Association, founder of the RNA Rainbow Chapter, and a Patron of literacy charity ABC To Read. Her bestselling novel TOGETHER has been translated into eleven languages and optioned for television adaptation; THE TWO LIVES OF LOUIS & LOUISE was long-listed for the Polari Prize and has been optioned by Enderby Entertainment as a feature film. Her first historical novel, SPIRITED, will be published in July 2020. She lives in Berkshire with her family and a terrier of dubious origin. 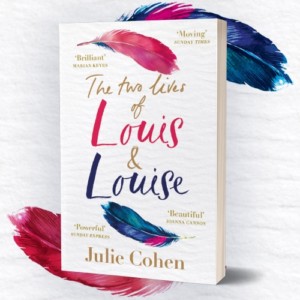 And a link to buy a signed paperback copy from an indie bookshop: