We are delighted to welcome Judy Leigh to the blog today to talk to us about her latest novel, The Old Girls’ Network. Judy, could you tell us a little more about it? 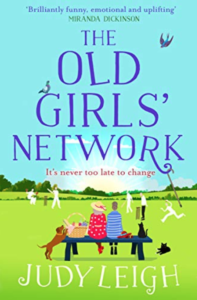 My fourth novel, The Old Girls’ Network, is another in the series of books I’ve written in which my protagonists are people in their older years. In this one, Barbara, 77, has a healthy scare and visits her younger sister Pauline to convalesce in the Somerset village of Winsley Green. They run in (literally) to seemingly-homeless Bisto Mulligan who stays with them throughout the summer. There are adventures, mischief, fun and romance in a story that suggests that it’s never too late to change and to find something that will make life fulfilling, even in the most unlikely places.

My background is in theatre and I like to use my writing to entertain readers; often, older people don’t feature as central characters in novels and I love the idea that life is out there for living whatever your age and situation and that, health allowing, there are good times and fun to be had by all. I recently moved to a rural community where everyone is a real character, warm and friendly and supportive, and this story was intended to show how lovely and supportive a community can be and how people can share joy, tears and fun together.

‘The Old Girls’ Network’ followed a writing pattern I’m beginning to feel comfortable with. It normally takes me about twelve to sixteen weeks to write a novel, usually completing a chapter a day and an early edit of the previous ones to get a sense of flow or continuity. Once it’s finished, I let the completed novel rest and then I’ll go back to it and improve it a week or two later, so that it feels fresh and I can have some idea of the reader’s experience of the impact of a new novel. Like most writers, I become a bit obsessed with the characters and the energy of the story. I know where my novel will end and I do plan the journey in advance but often I change my mind or let a situation or character surprise me. I rewrite as much as the story needs: by 20,000 words, I have to be sure that it excites me enough to finish it. That way I know that readers might be engrossed enough in the action and invested in the characters too.

It’s awesome. I’m up and in the gym for an hour and a half then I write and write and forget what time it is. Usually I stop for cups of tea and to stretch, or because one of the cats has sat on the laptop and completely edited a chapter. Being a writer is the best job in the world: if the sun shines, I can go for a walk or down the beach and work extra hours the next day. That’s a blessing.

I worked as a teacher of theatre for a while and found myself scripting plays, pantomimes, poems, monologues for students’ performance and I write lyrics for a punk rock band for a while, but I always wanted to write novels, ever since I was a child. I read avidly and I’m always super-impressed when someone has written a story that can take me to another place, make me believe the characters are real and to have my feelings tossed in a turmoil, based on their adventures. I love suspension of disbelief and the existence of another world in a novel.

Just do it. Believe in yourself. You’ve Got This. Don’t Give Up. Don’t look back, or up, or down – look straight ahead to the future and have confidence in your ability. Don’t be afraid to edit, change, grow, rethink. Plaster all those clichés on your wall, look at them daily and you will get there.

I wrote a new novel during the lockdown months from March to June, and now I have just started working on an idea for another novel. I’ve written the first chapter, worked out the likely ending and now I’m in to more detailed planning. I’m so excited about this one. It is about a woman who used to be a dancer in the 1960s and her three sons. The action will be close to the beautiful Scottish lochs – I went to Inverness twice last year and I was so moved that I determined to set a novel there

Judy Leigh has lived all over the UK from Liverpool to Cornwall, but currently resides in Somerset. After teaching theatre, writing lyrics for a punk band and setting up Shakespeare Festivals, she completed an MA in Professional Writing.Her next novel, The Old Girls’ Network, is available now and follows the bestseller, Five French Hens. All her novels, including A Grand Old Time and The Age of Misadventure, celebrate the ups and downs of life, relationships, the power of laughter and the belief that everyone has a second chance at happiness, whatever their age.She is a prolific writer, but when she is not at her computer you will find her on the beach, walking, doing yoga or splashing in the sea. She is also a Reiki healer, a vegan and an animal lover. She has three black cats and she enjoys live music, theatre and football.
Book Links: Follow on Bookbub at: https://www.bookbub.com/authors/judy-leigh
Where to find Judy:
Sign up for newsletter: https://mailchi.mp/354a1f3b9119/

The Age of Misadventure