In honour of the RNA’s 60th Anniversary we’re interviewing some of the many volunteers who work hard behind the scenes to keep the organisation, website and blog running smoothly. Today, John Jackson, who I’m sure we all know, is in the Hot Seat. I’m going to hand it over to John to introduce himself, as he does it much better than I can! 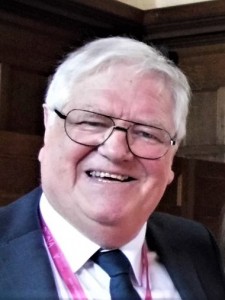 I’m John Jackson, informal purveyor of champagne cocktails, marmalade, photographs and encouragement to the world of romantic fiction, especially the members of the RNA. I also look after the Author Profiles on the website and had the very great pleasure of organising the York Tea & Joan Hessayon Award Ceremony last year.

I’m not overweight! I am “easy to see”, and being a male member of the RNA, even EASIER to see!

Welcome, John. ) Can you tell us a bit about your historical romance, Heart of Stone. What kind of research did you do before beginning the book?

I had been researching my family tree for about 50 years! Long before “Who Do You Think You Are” and the Internet came along, I had been going back over church records, and spending time at the Genealogists Society HQ in London. My mother’s maiden name was Dumaresq, which is a Channel Islands name, and is as rare as it sounds. It also means that, if you find one, they are related!

And then the idea takes root. Some of this could make a REALLY good book!

Simple, and living proof that if I can do it, anyone can!  There is only 1 Golden Rule. Join the RNA’s New Writer’s Scheme! Just brilliant.

I’ve spent the last twenty years of my working life, writing professionally; everything from drafting the Solomon Islands (Merchant Shipping Safety) Order, through to various technical, safety and procedure manuals for the different shipping companies and governments I’ve worked for. I knew I could write, and knew my way round a word processor and the technical side of document managing. That is NOT writing a book, though.

I had also written stories for my kids – sub-Beatrix Potter style animal stories, very many years ago.

It wasn’t until I met some members of the RNA, initially on-line talking about Strictly Come Dancing, and then in the flesh, and then met a LOT of writers. Great friends all, but then the drip starts!

Before I knew it I was staying up late to make that application for the New Writers Scheme, and much to my amazement, was accepted! The rest is history.

LOTS!! But probably “Ken Follet’s “The Pillars of the Earth”

First and foremost. Don’t give up!

Realise that you have to learn the craft of writing.

Believe in what you have written.

Listen, and accept the advice and criticism you will be given. (good or bad)

You WILL get there!

Another historical, with the working title of “Strange Bedfellows”

It turns out that Gt-gt-gt-gt-Granny was one of the “Faro Ladies”, although in a small way. She also led what might best be described as an “unconventional life”. 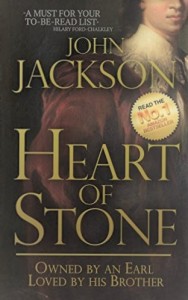 John is a British author of historical romances based on his ancestors. His first novel, Heart of Stone, was published in 2017, and concerns his evil great-great-great-great-great Grandfather, Robert Rochfort, Earl of Belvedere, “The Wicked Earl.” It was short-listed for the 2018 Joan Hessayon prize.

He is currently working on his second novel, tentatively titled “Strange Bedfellows,” based on the life of Robert Rochfort’s daughter Jane Butler, Lady Lanesborough. Another ancestor with a deeply unconventional life, although not as wicked as her father.

John has spent a long time researching his family tree and found a lively lot of ruffians, rogues and chancers, all of whom are conveniently dead, so they can’t sue, and who make great subjects to write about.

In his own words, “I was brought up on Georgette Heyer from an early age, and, like many of my era devoured R L Stevenson, Jane Austen, R M Ballantyne, and the like. He describes his writing style as “Bernard Cornwell meets Jane Austen,” and he only wishes that was true.