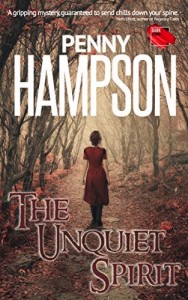 We are delighted to welcome Penny Hampson to the blog today to talk to us about her new release. Penny, can you tell us a little about it?

I’m very happy to be here, so thank you for inviting me. It’s a real thrill for me to be in the RNA Author Hot Seat to talk about my latest release, The Unquiet Spirit, which is a contemporary paranormal suspense, with more than a touch of romance. This has been a bit of a departure for me, because up to now my stories have been firmly set in the past.

The Unquiet Spirit is the story of historian Dr Kate Wilson and what happens to her life when she inherits her godmother’s house in Cornwall. To say that things don’t go smoothly is a bit of an understatement. But this is not just about Kate; with the discovery of a hidden journal and a mysterious portrait, a secret love story from the past emerges. With a little supernatural prompting, it becomes Kate’s quest to uncover the identities and the fates of the lovers – a task that leads to life-threatening danger.

Lots of things inspired this book. My husband suggested writing a contemporary story – he’s excellent at giving constructive feedback on all my stories, but he’s not a big fan of bonnets and carriages. I was browsing on the internet, as one does, and came across a house for sale – sadly, not one I could afford – and this became my inspiration for The Beeches. I wondered what it would be like to live in a house like that, a house that would surely have some interesting history.

I also wanted to introduce elements of life that are sometimes overlooked or ignored. One of my characters suffers from a chronic illness, and I wanted to show how that can impact the whole family, something of which I have personal experience as a carer.

The setting was an easy decision for me – Falmouth in Cornwall. I love it. It’s not the most picturesque of Cornish seaside towns, but it’s a fantastically vibrant place, with what I call a real community feel about it. I’m sure the extra buzz is due to not only the summer visitors, but also the student population of the local university, which specialises in the creative arts.

In addition, Falmouth has a fabulous Maritime Museum, and I can certainly recommend the local studies library located inside the museum. There are lots of lovely coffee shops too – the one where Kate has breakfast is based on a favourite of mine. But, I hasten to add, the one where she spies on the art dealers’ is entirely a figment of my imagination! The other locations that feature in the story, Bath and Oxford, are also places I love. I worked in Oxford for many years and I still live close by, while Bath is a place I try to visit at least a couple of times a year – I never tire of its wonderful architecture.

As for names, I needed strong names for my two main characters, and Kate and Tom seemd to fit the bill. I was also trying to avoid names that are too trendy or dated, and I think these are fairly timeless.

The Unquiet Spirit started life back in 2018. It had a different working title then and even the main characters’ names hadn’t been decided. By the beginning of the following year, I had something that I was happy with. I was especially keen to make mystery the focus of the story, although the romance comes a very close second. To heighten the mystery element, only Kate’s point of view is shown, so neither she, or the reader knows what is going through Tom’s mind.

I submitted it to The New Writers’ Scheme at the beginning of 2019, and in April of that year I received my Reader’s Report. This was a very encouraging blend of constructive criticism and advice on how my story could be tweaked to improve it. The takeaway message was that, with these tweaks, my story would be suitable for submission to publishers.

I can’t tell you what a boost to my confidence that Reader’s Report was; at last I was beginning to accept that I was capable of constructing a believable story that would engage readers. Of course, the icing on the cake was when my book was taken up by Darkstroke and The Unquiet Spirit was finally published.

What was the hardest part of the book to write?

There’s a key scene between Kate and Tom, when he reveals his dreadful secret. Trying to put myself into his shoes, imagining how much detail he might give her, and how he would feel afterwards was challenging to say the least.

On a lighter note, having been out of the dating scene for many years, I had to take advice from my daughter on how a budding romantic relationship progresses these days. Fortunately, neither of my characters subscribe to Tindr!

My next book is another historical entitled A Bachelor’s Pledge, which will be released on 7th October. It’s the third in my Regency-set Gentlemen Series, about a loosely linked group of friends, although each book can be read as a standalone. It tells the story of government agent, Phil Cullen and Sophia Turner, the young lady he rescues from a notorious brothel. Both become embroiled in a plot to unmask a ruthless French spy and prevent a hidden cache of gold reaching French shores. Expect lots of adventure and action. Conveniently, it too is mainly set in Falmouth and Bath, making my research trips to these places doubly useful!

Beyond that, I have more contemporary paranormal mysteries to come. I’ve plans for Freddie, a minor character from The Unquiet Spirit, to have his own encounter with the supernatural, and I’m also working on a short story about witches set, believe it or not, in Glasgow.

You can get a copy of The Unquiet Spirit: getbook.at/theunquietspirit 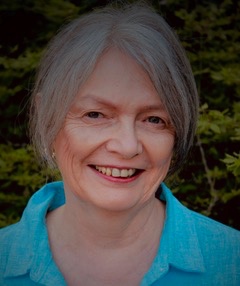 Some time ago Penny Hampson decided to follow her passion for history by studying with the Open University. She graduated with honours and went on to complete a post-graduate degree.

Penny then landed her dream role, working in an environment where she was surrounded by rare books and historical manuscripts. Flash forward nineteen years, and the opportunity came along to indulge her other main passion – writing. Penny joined the New Writers’ Scheme of the RNA and  three years later published her debut novel, A Gentleman’s Promise, a traditional Regency romance. Other books in the same genre soon followed.

But never happy in a rut, Penny also writes contemporary suspense with paranormal and romantic elements. Her first book in this genre is The Unquiet Spirit, published by Darkstroke.

Penny lives with her family in Oxfordshire, and when she is not writing, she enjoys reading, walking, swimming, and the odd gin and tonic (not all at the same time).

For more on Penny’s writing, visit her blog: https://pennyhampson.co.uk/blog/