We are delighted  to welcome Natalie to the blog today and that you could join us to talk about your new release. Could you tell us a little more about it? 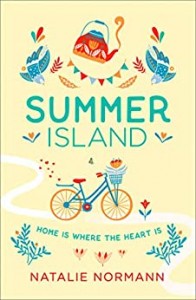 Summer Island is my first book in English and the e-book was published  in June, and in September, the paperback was out. The story is set on a small island on the west-coast of Norway. A British chef inherits a smallholding from a father he never knew. At first Jack thinks it’s an e-mail scam, and when he realises that it’s real, he travels to the island, thinking he might sell the farm and make a bundle. Things doesn’t turn out to be as easy as that, of course. There’s an attractive woman, lots of good food, and even a flock of sheep and a lovely dog.

We all now about Nordic Noir, we’ve read the books, seen the movies and TV-series, and it leaves the impression that Scandinavia is always cold, grey and snowy. And sure, it’s like that too, of course, but it’s so much more than that. Spring and summer in Norway is special. So, instead of Nordic Noir, I try to show Nordic Romance.

Because I also write historical romance series in Norwegian, I already write six books a year, and I have to fit the English books in between. And when I started Summer Island I had no idea how long time it would take for me to actually write it.

I also had all sorts of doubts, and a few panic attacks, as to wether I would be capable to write an entire book in English. I speak English fairly well, but to write in a foreign language is something entirely different. A few times I sent the manuscript to Charlotte Ledger, my editor at One More Chapter, to get her feedback and to be sure I was on the right track. She was so helpful and encouraging, she made it so much easier to get over the doubts. In the end it took me about a year to finish it.

After writing three series with eight weeks between manuscripts, I have developed techniques that was a great help. I do quite a lot of work before I start writing a book. I’m big on lists, so I make lists of character development, plot ideas and settings, and lists of scenes that pop into my head. All this I write by hand in a notebook. In the end I have most of it in my head and I can start writing. I don’t end up with an overly detailed plan. I’m neither a plotter nor a pantster, I’m more of a hybrid.  I can’t just start on page one and let the muse take over, that’s too much work. The editing process would take forever. I need to know where I’m going, I don’t need to know everything about how to get there. When I start, I aim for a quick, complete manuscript, and I take notes while I write, so I can come back and look at them in the next round. I also edit as I go along, it saves time. So that when my first version is finished, a lot has been edited already.  Then I start from the beginning and work my way to the end.

I used to work from about 23 pm until 5 am in the morning, then get up at 14 or 15 in the afternoon. I don’t do that anymore, now I try to go bed before 3 am. That’s because I tried to divide my writing hours in two halves, one for the Norwegian books and one for the English. That didn’t  work at all. I found it really hard to go from one language to another.  I once wrote a whole paragraph in my Norwegian book in English … What I do now is I get up earlier, around 10-10.30, so that I can focus on one language in the day and the other at night. It seems to work most of the time.

You would think it was writing in a foreign language, wouldn’t you? I didn’t really  have a problem with that one I got started,  a lot less than I thought I would. The biggest problem was POW, actually. When I write historical series, I have a multitude of characters to work with, and I change POW all the time to keep the story moving forward. And if I get stuck, I mean really stuck, I throw in the occasional murder or huge accident , or something else dramatic to shake up   the story. It’s like writing a soap opera, except I’m the only writer. In Summer Island the editor wanted me to have only two POW’s; the two main characters. That took a fair amount of discipline and head scratching to get that in place, but I loved the challenge.  For a writer, there’s nothing more important than to have new challenges, it’s how you develop your writing muscles.

Norwegian children’s books in the sixties and seventies tended to be very realistic, and I had no interest in that.  I’m not sure I would have developed such a love of reading if it hadn’t been for Astrid Lindgrens books. She let her imagination go wild, and wrote such beautiful and  funny books. Then there was Roald Dahl, who I was sure was Norwegian for a long time. He sort of was, but his writing isn’t at all. His stories also had that wonderful madness about them. Then there was Little Women by Louisa May Alcott. To read about Jo and her dreams of being a writer made a huge impression.

Right now I’m in the last round of edits of Christmas Island, and yes, it’s Scandinavia in the winter, but it’s also Christmas, which is a huge deal in Norway. There’s lots of good food, romance and this time a fluffy cat.

In this book, Jacks sister, Holly, comes to the island to get away from London and a difficult situation at the hospital where she works. She gets herself in trouble and is saved by the local hermit who only wants to be left alone. The cat is the friendly one.

I do complain about edits – mostly because I write so many books in a year, but the truth is that I enjoy the editing process.  The first version is about getting the story down, the editing process is about taking the best ideas, making sure everything builds up the way they should and just making the book as good as I can manage. 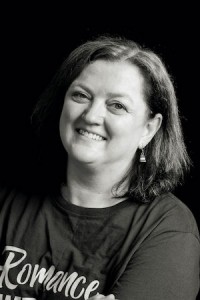 Natalie Normann is a Norwegian writer and writes historical romance series in her native language. She has also written crime novels and children’s books before turning to romance full-time.

In October 2017 she moved to Cardiff and joined the RNA a week later, wishing she had heard about the association twenty years earlier.  She’s now back in Oslo.

She grew up in a shipping town on the west-coast of Norway and always wanted to be a writer. Actually, she wanted to smoke cigars and drink whiskey like Hemingway, only to have to admit she didn’t like either, and had to settle for chocolate and the occasional glass of Baileys.

Her writing journey started with short stories in women’s magazines until her first book was published in 1995.

Summer Island is her first romance written in English.

Natalie was talking to Ruby Moon