A warm welcome to the blog today to Sheila Norton who has joined us to talk about her new release. Sheila, could you tell us a little more about it? 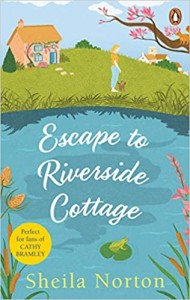 Thank you. I’m delighted to be here too!  My new release, ‘Escape to Riverside Cottage’, was published on 4th March and is my twenty-second novel. It’s contemporary ‘feel-good’ fiction, a real dose of escapism, which I think lot of us have been needing during this past year of restrictions! My heroine in this story is lucky enough to be given the means to literally escape her old life, although she’s not to sure at first what she wants to do instead.

I wanted to write a book in which the lead character was a slightly older woman (Clare is 57 at the beginning of the story) who’s a bit feisty, a bit cynical at times, and finds herself confronted with people who are strangely unfriendly! I set out to explore how she would react, why she might want to stay among these people, and ultimately discover why they’re like it. I’ve also given my heroine a dog. All my recent books have featured pets and this story does see Clare take up a pet-focused career part-way through the book!

I always use ‘baby names by decade’ websites to decide on characters’ names, to get some ideas for their relevant ages. It’s easier when the characters are my own age, or the ages of my children or grandchildren, as I’m more in-tune with what’s appropriate for those age-groups. I try to avoid names I’ve used in previous novels, and also to avoid names within the same story that sound alike or begin with the same letter, to avoid confusion. And unless the character’s really nice, I avoid using names of people I know well – although that has sometimes happened by mistake as I don’t associate my characters with people in my real life!

The settings of all my recent books have been inspired by the surrounding towns and villages of my second home in Devon. The particular setting of ‘Escape to Riverside Cottage’ is, as always, fictional, but it’s a mixture of two villages I know, close to south Devon estuaries, although this one, Little Sorrel, is smaller than either of them. It needed to be very small and very remote, for the story to work!

I’m happy to say, there is no fixed pattern to any of my days! I had to live with such strict routines when I was still working at my day job, and since I’ve been retired, I like deciding one day at a time how my days will pan out. Back then, I could only write during the evenings and weekends, fitting in scraps of time around having three teenagers, a dog, two cats, and all the work associated with running a household – so I had to be very self-disciplined about it. Now, I don’t write in the evenings at all. I’m not a ‘morning’ person, though, so I don’t start early either!  I usually have one long session, starting either mid-morning (breaking for lunch) or starting early in the afternoon. Sometimes I do write for most of the day, only stopping for a walk, and for lunch. I don’t always write every day, but I quite often write at weekends, as, being retired, there’s not much difference between the days!

Typically, I’ll start by re-reading the previous day’s work, and – unless there’s something I absolutely have to change – I’ll plough straight on from there. When I’m ready to stop, I always try to finish, counter-intuitively, at a place where it’s going well and I’d really like to carry on! This guarantees that I’ll be fired up ready to start again next time. I usually type a few lines of text, beneath where I’ve stopped, describing what’s going to happen next. I work on a laptop, so I can sit anywhere. I share a desk in our study with my husband, but I often choose to work at the dining room table, or in our conservatory, or – in the summer – in the garden. I always keep a notebook too, so that I can jot things down when I’m not in a writing session.

I knew from childhood that writing was my ‘thing’! Composition (as we called it back then) was my best subject at school, and I was writing stories for my friends while I was still quite young, and winning school prizes for poetry. Despite this I never dreamed it could be my career – I didn’t know any writers, or anything whatever about how to go about it, and was encouraged to get a ‘day job’ to support myself and basically keep my writing as a hobby.

I started with short stories. In my thirties, at home with three small children, I discovered the Writers’ News magazine, and entered two of their short story competitions, winning first prize in both. This gave me the confidence I’d lacked, and I started writing stories for the women’s magazine market. I had over a hundred of these published before the market started to dwindle, and I decided that if I wanted to keep writing, I needed to finally get a novel written. ‘Chick lit’ was big at the time, and I chose to write a chick lit story but with an older heroine (I was over fifty myself by then). After submitting to agents and publishers for a couple of years, my first novel was finally accepted, and published in 2003. I continued to work in my day job in the NHS, writing in my spare time, until my sixth novel was published, when I took my retirement a year or so early. I didn’t find out about the RNA until my first editor told me, when my first novel was published!

I’d tell myself firstly to have more confidence in my own ability! Although there was no help anywhere for aspiring writers back in the 1960s, I should have tried harder to find out how I could get started, instead of accepting that it would always just be a hobby. I’d tell myself to be more insistent when the headmistress of my very academic girls’ grammar school told me I wasn’t suited to journalism (my original career choice); but I’d also tell myself that it was in fact a very wise and useful decision to learn secretarial skills when I didn’t know what else to do. My fast touch-typing has been a fantastic benefit 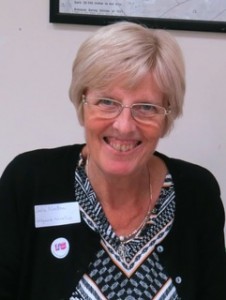 Sheila Norton lives with her husband near Chelmsford in Essex, and part-time near Torquay in Devon. She spent most of her working life as a medical secretary, before retiring in 2008 to concentrate on her writing. During the years she spent bringing up her three daughters, she also did various jobs including teaching the piano and recorder, doing home typing, and working in a playgroup. She now has six grandchildren, and also has two cats – the latest in a succession of dogs and cats who have inspired some of her recent stories! When not working on her writing, Sheila most enjoys spending time with family and friends, as well as reading, walking, playing the piano, and photography, and loves exploring the countryside around her Essex and Devon homes.

Where to find Sheila:

Sheila was talking to Ruby Moone