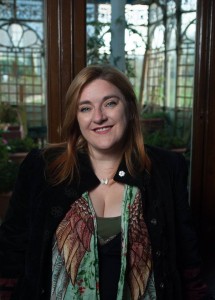 The Lost Girls of Foxfield Hall grew out of my obsession with folklore and especially with stories relating to trees and landscape, out of the ground itself as it were. I love really old stories, stories that are so old they barely make sense anymore, or stories that have grown and twisted, changed over time to something else.

This book is actually my ultimate cautionary tale for writers to never give up entirely on a story. I originally wrote it a few years ago as a YA fantasy along the lines of Tom’s Midnight Garden and The Children of Green Knowe. Unfortunately at the time the market had shifted to older YA and dystopia and so the book was a very hard sell. It’s disappointing but sometimes these things happen. As writers sometimes we just have to get used to it and move on. Fast forward a few years and we were discussing Women’s Fiction, Fantasy and Fabulism, and Time Slips with my editor, so I brought it up. The plan was quickly hatched to rewrite it as an adult novel instead. I gender-flipped one of the main characters and so Megan was born. It also meant I was suddenly writing a f/f romance as part of this complex book. But it made everything click. There was a lot of rewriting but it was worth every minute. So the answer is not very long, and several years, and then not very long again. But at least if proves that eventually the right story can find the right editor in the end. And when the two come together, magic really does happen.

I have a day job which I work in the mornings so there’s no writing time until after lunch. I also have a house full of people at the moment with lockdown, so there can be a lot of interruptions. I have sort of reverted back to the way I wrote when my children were small which is to squeeze in writing time whenever and wherever I can. I always have a notebook on hand, and because I’m in the house I usually have my manuscript open on the laptop. I like to write every day, especially when I have a deadline. Nothing focuses the mind quite so much as a looming date in the calendar. I try to write first and fix later, but sometimes as I start writing I find it easier to go over what I wrote last to sort of ramp up to new words. Sometimes when stuck, I go right back and do a pass through everything I have written so far to firmly fix what’s happening in my mind before going on. When it comes to writing techniques I am firmly in the “I will use whatever works at this time for this book” camp. I usually sit on the sofa to write, in our living room. Luckily I can write even with a lot of background noise, thanks to many years of writing with little kids (when silence is suspicious, deeply suspicious).

Don’t give up. Never give up. Write the book you love, the book of your heart, and think about the market afterwards. I truly believe that a book will eventually find its home.

Be open to change, be willing to listen to others, but at the same time stay true to your own vision for your book. It is YOUR book, after all. Follow guidelines, write when you can but don’t follow a rule off a cliff because not all rules are specifically for you.

I am working on a book about an enchanted library, a man who guards it and a woman who needs to crack open all its secrets in order to find out the truth about what happened to her mother, her own past and who she really is. There’s lots of amazing research into alchemy and metaphysics which is kind of mind bending, but I’m really enjoying it.

As Jessica Thorne she writes Fantasy, Space Opera and other fantastic tales, including The Queen’s Wing, Mageborn and Nightborn. The Stone’s Heart was nominated for the Romantic Novelists’ Association Romantic Fantasy novel of the year in 2020. 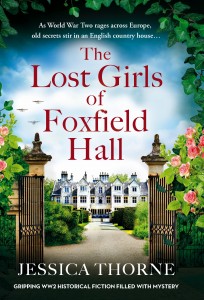 The Lost Girls of Foxfield Hall

September, 1939. The moon shines silver on the looming yew trees. Thinking of her fiancé, fighting for his life and country in the war, breaks Eleanor’s heart, but also gives her courage. She takes a deep breath, picks up her camera, and follows the dancing lights into the maze.

Present day. With her little brother Missing in Action, gardener Megan Taylor runs from her grief to take a job at Foxfield Hall – a centuries-old place full of myths and folklore – restoring the wild maze in the overgrown gardens. Throwing herself into shaping the tangled ivy, Megan soon becomes drawn into the mystery of Lady Eleanor Fairfax, the Hall’s most famous resident… the villagers say she disappeared without trace at the Harvest Festival in 1939, leaving behind a grieving father and a heartbroken fiancé.

Leafing through delicate old newspaper cuttings and gazing at an ornately framed portrait of the missing woman, Megan is full of questions. Although no body was ever found, could Eleanor have been murdered? Did she run away, unwilling to marry the man who loved her? Or, with her father working at the War Office, did Eleanor stumble upon a secret she shouldn’t have?

Then, one night under a full moon, a mesmerising light inexplicably draws her to the entrance of the maze. Megan is filled with a strange certainty that, if she follows it into the shadows, it will lead to the truth about Eleanor… but could Megan herself be the next occupant of Foxfield Hall to be lost forever?

A spellbinding, magical and addictive tale about the mysterious and ancient legends at the heart of the English

The Lost Girls of Foxfield Hall on Amazon

The Lost Girls of Foxfield Hall on Apple

The Lost Girls of Foxfield Hall on Kobo

The Lost Girls of Foxfield Hall on Google