We are delighted to welcome Richard Gould to the blog today to talk about his books, and his new release, Nothing Man.  Richard, would you tell us a little more about it? 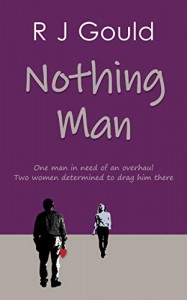 Nothing Man flips the traditional romantic fiction story.  Of course I recognise that the Romance genre is diverse and subtle but the reccurring plot has a woman (often insecure) seeing a man (often alpha) and wanting him but he’s initially unwilling, unsure or unknowing. After lots of struggles she gets her man, assuming she still wants him and hasn’t met someone else on her journey.

My novel is told from the male protagonist’s point of view. At the onset it’s the two women he encounters who are the alphas – powerful, sexually and socially confident, financially successful and as able to take the lead in starting, maintaining and ending relationships as any male. By contrast, Neville, the male protagonist, appears at the outset to be delta grade, an insecure male about to undertake a tragi-comic journey in search of love.

My fiction often depicts male insecurity, I hope in both a humorous and a poignant way. Nothing Man fits this pattern with the lead protagonist the oldest hero I’ve created. The novel addresses whether it’s ever too late to have a second chance. Neville is in his mid-fifties, has rock bottom self-esteem, is in a dreadful marriage and has a job he hates. Can the two women he meets drag him out of this abyss?

Although humour is an important feature in my writing, I’m always wary of overuse. In this book there is a particular tension because at the outset the male lead is in a dark place that he will have to escape from. The balance between uncomfortable realities and a wry slant on events has to be spot on – this was my biggest challenge in writing the novel. A couple of sentences in the book description hopefully alert the reader to the fact that difficult events are tackled in a relatively light-hearted way:  Neville Watkin’s life is so rubbish surely things can’t get any worse.  Yes they can, because his wife leaves him, he loses his job, has a car crash and ends up in hospital.

In the past I’ve had two publishers, but early on during the first COVID lockdown I decided to go it alone and self-publish. Not surprisingly this was a big decision which I don’t regret making though with some provisos.

Starting with the benefits, it means that I have full control over all aspects of writing.

In the past covers have been an issue for me – I was never keen on what the publishers provided. If the sub-genre they depicted on my covers had generated loads of sales I would have been won over, but that was never the case.

Having worked closely with a cover designer I have developed a particular style which I’m more than comfortable with although I appreciate it isn’t mainstream for Romance.

The quality of the writing is naturally the prime issue and without an editor provided by a publisher I’ve had to use other pathways to maintain standards. I work closely and regularly with a group of three other authors to do this.

The relatively easy bit of self-publishing is the publication itself. The challenge is the marketing, a crucial element being to gain visibility. I can’t say I’ve fully cracked it yet but retiring from a busy job has freed up the time needed to focus on promotion. I didn’t initially appreciate just how much time would be required and ended up spending three months more or less full time researching, trialling and evaluating various marketing techniques.

I’m sure blog readers will be curious about the outcome so far. The answer is a considerable number of eBook sales and downloads, though little net income when set against advertising costs. I’m in the fortunate position of being able to put having many people reading (and enjoying) my writing as a higher priority than generating income.

It’s worth adding, in what is turning out to be somewhat confessional, that I refuse to sacrifice artistic quality. There are some out there using ghost writers to mass produce countless series, the marketing being of higher priority than the quality of the writing. That’s not for me.

I’m writing a novel provisionally entitled Then and Now. It tells the story of four people who met at university fifty years ago. The journey takes them from youth during the Swinging Sixties to a present day reunion. People change over time – my characters have changed – but by how much? I do wonder whether an individual’s thoughts, aspirations and desires substantially transform as they get older; I think rather less so than is sometimes supposed. No retirees I know are hanging around waiting for dementia to set in or for their children to put them in a care home. Instead they are searching for new adventures, be it travel, music, cinema or science. And romance can still blossom late in life, this being a theme in the novel! 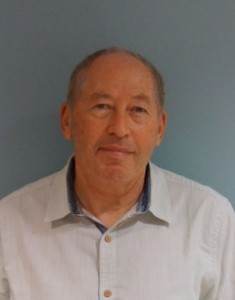 Richard writes under the pseudonym R J Gould and is a (rare male) member of the Romantic Novelists’ Association. He participated in the New Writers’ Scheme. Having been published by Headline Access and Lume Books, he now self-publishes.

He writes contemporary literary fiction about relationships, loosely though not prescriptively within the Romance genre, using both humour and pathos to describe the heroic journeys of his protagonists in search of love. He has published six novels to date, Nothing Man, A Street Café Named Desire (currently out of print), The Engagement Party, Jack and Jill Went Downhill, Mid-life follies and The bench by Cromer beach.

Ahead of writing full time, Richard led a national educational charity. He has been published in a wide range of educational journals, national newspapers and magazines and is the co-author of a major work on educating able young people. He lives in Cambridge.

Where to find the book:

Where to keep up with Richard:

Richard was talking to Ruby Moone