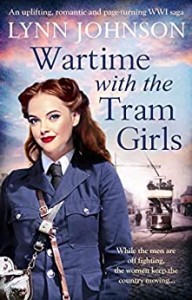 We are thrilled to have Lynn Johnson on the blog today to talk to us about her new release, Wartime with the Tram Girls. Lynn, could you tell us a little more about it?

My latest book, Wartime with the Tram Girls was published as an ebook on 3 March 2021 with the paperback edition following on 6 May. It takes up the story of Connie, one of the characters from the first novel in my Potteries Girls series set during the Great War. Book 1 – The Girl from the Workhouse tells the story of Ginnie Jones, a working-class girl who is sent to the workhouse, losing family and friends along the way.  She is, eventually, taken out to help her pregnant sister and gets ‘the worst job on a potbank.’ She is befriended by Constance Copeland, a middle-class young lady who is looking to reinvent herself. In Book 2 – Wartime with the Tram Girls, we find out much more about Constance’s story as she begins to redefine herself and becomes Connie. At the beginning of the book, having witnessed the death of suffragette, Emily Wilding Davison, Connie becomes a suffragette herself and that sets off a chain of events both good and bad. However, in doing this, Connie has secrets to keep, with at least one she isn’t proud of. As the war takes its toll on businesses, Connie’s family life becomes strained with financial worries. Connie becomes a tram girl – a clippie, doing a man’s job for a man’s pay. When the man of her dreams enters her life, will she have her happy ever after

Connie came to me as a fully rounded character with her own story to tell during the time I was writing my first novel. As far as she was concerned, her friend Ginnie only knew half the story and she wanted everyone to know more. I suggested she write a monologue of her life so that I could think about it. Sure enough, she turned out to be a great character and I love her boldness and her flaws.

If I can answer the second part of the question first – the setting was easy. I started to write Ginnie’s story after doing a considerable amount of research into my family tree and Ginnie is loosely based on my Grandma’s story. She was in the workhouse for a time, she lived in Burslem, and she was a mouldrunner on a potbank (pottery factory). I originate from The Potteries and went to school in Burslem so the setting had to be Stoke-on-Trent. The towns I mention are real but the addresses used and companies etc mentioned eg are not. The Potteries Tramway Company is based on the Potteries Electric Traction Company. I had pictures in my mind of many of the places I wanted to base my novels on and took lots of photos when I visited the area.

Regarding the characters names – they seem to come to me. I work with them for a time, sometimes I interview them. After that, if I can’t think of them being called anything else, I know I have hit on the right name. One piece of advice I received was not to give character similar sounding names or names starting with the same letter because it might confuse the reader. The one exception to the above is Ginnie. She was originally named Ginnie Cope and I was well into the writing of the story when I realised that Ginnie Cope and Connie Copeland were far too close. It seemed odd to begin with, but I decided Connie could keep her name and Ginnie became Ginnie Jones. Key to a name is that it must fit the era and social class in which it appears unless it is some sort of plot device.

Much of my research came out of my hobby of genealogy and was the starting place for the series. It took me into the local libraries and archives, to look at census material and I delved into piles of books and old photographs of Stoke-on-Trent. For The Girl from the Workhouse I visited Southwell Workhouse and the Birmingham Back to Backs as well as Gladstone Pottery Museum and Burleigh Pottery with my sisters. We had an amazing time. I was planning to visit Crich Tramway Museum as part of my research for Wartime with the Tram Girls but, unfortunately, COVID 19 put paid to that. Happily, I was able to communicate with the Tramway Museum by email before everything closed. They were so helpful and would like to add my appreciation to them in helping me to paint a wonderful picture for Tram Girls.

I would say that my journey to publication fell into two parts. The first part was all about learning the craft of writing. I joined Stromness Writing Group and began to write short stories with constructive comments well received. I went on writing courses with the Arvon Foundation, took a short course on writing at Orkney College, now part of the University of the Highlands and Islands, and bought recommended books on writing. The short story I was writing bloomed and soon I was on my way to writing a novel. Because it started as a story about my Grandma, it took me some time to fictionalise the novel, but it was a step I had to go through – to give myself permission to write the story as a novel. After that I was away! I even gave her a boyfriend!

One of the courses I went on was run by romance stalwarts, Katie Fforde and Judy Astley and I learned about the RNA and its fantastic New Writers’ Scheme. On the stroke of midnight on New Year’s Eve 2018 I pressed the button to join. Knowing nobody, I took myself off to Conference and walked among writers I had only heard of on their book covers. I was too scared to arrange a 1-2-1 with an agent that year but, the following year I had taken myself to task and decided this was going to be the year when I launched myself as a writer. I had three interviews and two asked for the full ms – which was inspiring in itself. I was deliriously happy when Keshini Naidoo of Hera Books subsequently offered me a two-book contract. I am extremely happy to tell you that I now have a contract for another two books in the Potteries Girls series to be published in 2022 and 2023.

That’s so difficult. I don’t remember having a lot of books of my own but my mother was a keen user of the local libraries and I took after her. I can remember that we were allowed to take out six fiction and six non-fiction at a time. So, I would go along with my mother and if Mum could spare it, I would take some books out on her ticket too rather than take a chance of running out. My all-time favourites were L M Montgomery who wrote all the Anne books. When I was reading them, I was Anne. I had red hair and my name was Lynn withoutan ‘e’. How infuriating it was when people spelt my name with an ‘e’! I also loved Enid Blyton of course, particularly the adventure stories, Mallory Towers, St Clare’s, the fairy stories – well, most of them actually. However, the Enid Blyton book that made a lasting impression was The Land of Far Beyond – a children’s take on Pilgrim’s Progress.

I would say be aware of the hard work that you will be committing to in writing a novel – mine have averaged about 110,000 words, but length can depend on the genre of novel you are working on. If you are working on a novel with a romance, then consider joining the RNA for the support and friendship of a very professional body of people. When you have made up your mind to get published, check out agents and publishers who are looking for submissions in your genre, set yourself timescales on what you need to do by when, and stick to them. Finally, don’t stop at the first book. Most editors look for a two-book contract so you need to have at least a synopsis for a second book – either stand-alone or part of a series. They will be looking to establish you as a brand.

My work in progress now is Book 3 in the series and it tells the story of a character from Book 2. We already know something about her but, how does she come to be like she is? What is driving her – what are her hopes and ambitions. The book will take the reader through the war years and into 1920 and will catch up with old friends and possibly enemies from both of the previous books. I am finding it so rewarding to take my characters on this journey and very much hope that readers will, once again, enjoy their company.

Thank you so much for joining us today! 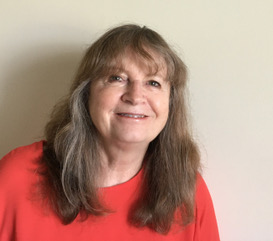 Lynn Johnson grew up in the Staffordshire Potteries before getting itchy feet and moving around the UK, from Stoke to the Western Isles, to Nottinghamshire, and back to Staffordshire before taking early retirement and moving to Orkney. Leaving school with no qualifications she started work in local government at the age of 15 and, several promotions later, became an HR Manager with a BA Hons in Humanities with Literature and a Diploma in Management Studies.

Lynn began writing fiction when she moved to Orkney and joined her local writing group and surprised herself by winning first prize in a Writers’ Forum competition with a short story set in The Potteries during the 1984 Miners’ Strike. At the time, she was also researching her family tree. The two hobbies combined and, in February 2020, culminated in the publication of her debut novel, The Girl from the Workhouse with Hera Books. Wartime with the Tram Girls is the second book in Lynn’s Potteries Girls series set during the Great War and was published on 3 March 2021. She has a further contract for two more books.

The Girl from the Workhouse

Wartime with the Tram Girls

Lynn was talking to Ruby Moone