A  warm welcome to Vicky Walklate who has joined us today to talk about her new release, Sacrifice. Welcome Vicky. 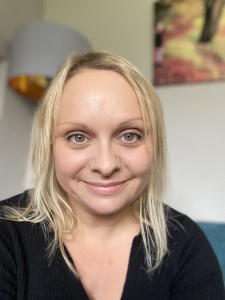 Can you tell us a bit about you and the RNA.

I joined the RNA in 2020 after I signed my publishing contract, hoping to meet and learn from other writers of similar genres. I love being a member and find the Romantic Fantasy Chapter particularly fun and supportive. I’ve also added lots of books by RNA members to my To Be Read list!

Sacrifice is the first book in a fantasy romance series, The Gods of Trivium, set in the fictional realm of Jothesia. It features three dragon shifter gods and their respective love interests. Books 1 and 2 cover the story of eldest god Rhetahn and his rebellious human sacrifice, Libby, who reluctantly unite to save their realm after catastrophe strikes.

I’ve always loved romance and fantasy books and decided to try writing my own in 2018, after self-publishing a historical novel a few years earlier. Originally, the story I came up with was urban fantasy with romantic elements. As the outline and first few chapters evolved, it changed to portal fantasy, then epic, then finally fell into place as a full fantasy romance when I realised that Rhetahn and Libby wouldn’t accept it any other way!

Sacrifice is a nod to my favourite romance tropes: enemies to lovers, forced proximity and the grumpy one is soft for the sunshine one. It also contains lots of different shifters and my twist on some British folklore, which was great fun to research.

The first draft took about six or seven months to write, and revisions took another two months. I’m a massive overwriter, so my main goal was reducing the word count to something reasonable for the genre. It then went through another two rounds of re-writing following two separate R&R (revise & resubmit) requests from Champagne Book Group, who are now my publisher. I’ll be forever grateful for the advice and encouragement they gave me and feel I have definitely ‘levelled up’ as a writer since signing with them.

There is a scene involving a river attack by an eachy, a creature from British folklore. My version is sort of a cross between an otter, a crocodile, and Tolkien’s Gollum. I wanted to make the attack as tense and convincing as possible, but I struggle with deep water and the thought of drowning, so it wasn’t easy to write.

I also find scenery descriptions very tricky. My first drafts usually consist of placeholder notes such as ‘INSERT SOMETHING ELOQUENT ABOUT TREES HERE!’ I’ve had some lovely feedback about my descriptions in Sacrifice though, so they must come out okay in the end!

I devoured stories by Enid Blyton and Roald Dahl, and was a big fan of Richard Adams, who wrote Watership Down, my all-time favourite book. I also loved the Sweet Valley High series, Nancy Drew, The Animals of Farthing Wood and many more, too many to list really as I was a voracious reader. I discovered romance – mainly historical – when I was a teenager, and quickly added Stephanie Laurens, Nora Roberts, Jude Deveraux and Judith McNaught to my ever-increasing list of favourites.

Honestly, pretty much every book I read! I get to the end and think, “oh my goodness that was amazing, I wish I had thought of it!” Many of the books I enjoy nowadays are by writers I’ve met or followed on social media, which adds an extra level of delight and awe when I read their work.

Don’t stop. Don’t give up. Your first draft doesn’t have to be perfect, it just has to be written. And don’t be afraid to ask for help and advice from other writers.

I’m currently revising the sequel to Sacrifice, with the aim of finishing over the summer. I’ve also recently completed the edits on my friends to lovers themed short story, which will be published in a Violet Gaze Press anthology later in 2021. Then I’ll go on to Book 3 in The Gods of Trivium series, and several other projects I have in the pipeline!

Thank you for joining us today, Vicky. Your book sounds fantastic!

Vicky Walklate is a romance, fantasy and historical fiction author. Fiction was her passion from a young age, when she read every book in the school library then started writing her own stories. She lives with her husband and young children in Norfolk, UK, and adores books about love, magic, found families and Happy Ever Afters. 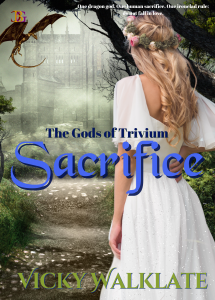 Dragon gods rule the realm, demons lurk in the shadows, and a sorcerer hides a dangerous secret. A war is brewing in Jothesia, and the gods have no idea.

Being selected as human sacrifice to the immortal dragon shifters is supposedly an honor, but rebellious Libby doesn’t see it that way. When the sacrificial ritual goes badly wrong, she finds herself in a reluctant alliance with eldest god Rhetahn. He’s grumpy, cynical, and utterly exasperating …and she can’t get him out of her head.

Rhetahn knows there’s something wrong with this sacrifice, and it’s not just her infuriating stubbornness or the way she makes his jaded heart skip a beat. When terrible misfortune befalls his brothers and renders him powerless, his only choice is to unite with Libby to seek answers.

As they set out on a dangerous quest across the realm, the compelling attraction between them is undeniable, yet doomed. To recover his magic, regain his strength, and prevent the demons from seizing power, Rhetahn needs her blood. He must kill her at the end of their journey, even if it breaks his heart to do so.

But a terrible power lies hidden in Jothesia, one that could destroy everything the gods have built. Libby and Rhetahn’s forbidden relationship may be the realm’s only hope against utter ruin.

Vicky was talking to Karen King. Karen is a multi-published bestselling author of fiction for both adults and children. She has also written several short stories for women’s magazines.
Currently published by Bookouture and Headline. Karen writes about the light and dark of relationships. Her debut psychological thriller, The Stranger in my Bed, was published by Bookouture in November 2020 and her second one, The Perfect Stepmother, was published in June 2021. She is also contracted to write three romance novels for Headline, the first one, One Summer in Cornwall, was published on 29 April 2021 and the second one, The Best Christmas Ever, will be published in October 2021.