We are delighted to welcome A. L. Lester to the blog today to talk about her new release. Ally, can you tell us a little about it? 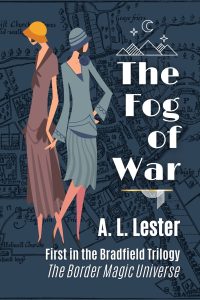 Hello there, thank you so much for letting me visit the hot-seat today. I’d love to tell you about it! The Fog of War came out on the sixteenth of August. It’s the first of a new trilogy set in the village of Bradfield, Somerset just after the First World War. The character tying all the books together is Dr Sylvia Marks. She was a surgeon at the Royaumont Scottish Women’s Hospital in Northern France during the war and now she’s come home to take over her father’s general practice. The first book focuses on her developing relationship with her friend Lucy…and her guilt at moving on from her mourning for her lover, Anna. Anna disappeared in mysterious circumstances in 1917 in France.

Of course, being me, I couldn’t manage to write a story without paranormal shenanigans. I try and ground my stories in history and then ask myself ‘What would these characters do if weird stuff began to happen to them?’ I seem to end up with quite complicated stories that aren’t everyone’s cup of tea, but if people like them, they really like them!

Sylvia was a minor character in a novella I wrote in instalments a couple of years ago for my newsletter subscribers. She swept in at the end and sewed up the bleeding people, falling out of my head fully formed. My wonderful editor, Lourenza Adlem, suggested I base a book around her and initially we talked about a series of cosy mysteries where the village was almost a character in its own right. When I began plotting though, that didn’t work for me and I focused on a more romantic feel behind all the suspense and drama.

A lot of my writing features people who have been touched by World War One in some way and when I started reading about women medics in the early twentieth century it was natural way for me to go. I discovered that the Scottish Women’s Hospital under the leadership of Dr Elsie Inglis sent volunteers to run hospitals in Europe, in Serbia and later in Northern France. Dr Frances Ivens ran a hospital at the monastery of Royaumont staffed entirely by women and that was where I placed Sylvia. I was also inspired by the Endell Street Hospital in London, run by Dr Louisa Garrett-Anderson and her life-partner Dr Flora Murray.

I also drew on my grandmother’s stories about the chain-smoking lady doctor who was friends with her mother before World War One!

Bradfield is a thinly disguised local village on the Quantocks near my home. I had already set Inheritance of Shadows, Taking Stock and An Irregular Arrangement there. A lot of the things I’ve written in the last couple of years seem to fall out of Inheritance of Shadows in some way, either set on the same farm or picking up minor characters and taking them forward with their own stories. The settings are often fictionalised places I know, or an amalgam of places I remember from my childhood.

With regard to names, as I think of the character, the name just comes to me. I don’t have a process. Sometimes I fiddle around with them a bit…for example in Taking Flight, Mal, the baddie, began as Matt, until a beta reader pointed out that Matty was a main character in Inheritance of Shadows.

I have Office Colleagues! I write online between five and eight in the morning with Ofelia Grand and Nell Iris, with whom I share a publisher. They write six to nine Swedish time every weekend morning and weekdays when they are able. I usually check in between six and eight UK time unless I’m very insomniac. I find I can do about a thousand words each session once I get into the swing of it. I spend the rest of the day doing life stuff and faffing about with marketing and social media. It’s brilliant having supportive colleagues to bounce ideas off. I am also part of the moderator team for the Quiltbag Historicals facebook group and we chat a lot, too.

I think my innate distaste for face-to-face contact with humans, fictional or not, would make this really hard!

Being horribly shy and very awkward in real-life situations I’d probably have Francis Crawford of Lymond and Sevigny there in my dining room and be tongue-tied. I’d like to sit him and Philippa down with Koli (read The Ramparts Trilogy by M. R. Carey if you fancy a dystopian future set in West Yorkshire with dangerous plants) and Philip Eslingen and Nicholas Rathe from Melissa Scott’s alt-sixteenth century Low Countries Astreiant books. Then I’d probably have Peter Wimsey and Harriet Vane, Pat and Fenn from K. J. Charles’ Proper English and finally, Stephanie Ahn’s Harrietta Lee, a witch PI in an alt NYC who’s made poor life choices and gets into all sorts of trouble.

Between them I’m pretty sure they’d keep the conversation going well enough that I wouldn’t have to contribute much at all! I’d like to hear them tell each other the most basic aspects of each other’s lives and watch their reactions to each other as they all exchange tall tales and get to grips with each other’s universes.

Rosemary Sutcliffe, Arthur Ransome and a bit earlier, Enid Blyton. I was a Blyton fanatic, but not really the Famous Five. I liked the books with the parrot, the Adventure series, I think? And Malory Towers, which led me to the conclusion I’d be happy at a boarding school…I was a day student at a boarding school from the age of eleven and I blame Blyton fiction for letting me hold all sorts of incorrect assumptions about how fun it would be. Once I got there I realised it was a bit like Lord of the Flies but with more boiled cabbage and fewer pigs heads on sticks and I decided I was happy as a day student.

I can remember my parents bringing me a new Ransome book every week when they came back from shopping. If I remember correctly there are twelve in the series, and I loved the ones with Dick and Dot the best. And We Didn’t Mean to go to Sea!

Sutcliffe I came to later on. Her books are so painfully beautiful…they really resonated with the sense of dislocation and loneliness I suffered as a teenager. They are books I go back to now and I still cry over them. Warrior Scarlet in particular.

Once I hit about fourteen I discovered Dorothy Dunnett (via Jean Plaidy) and Dorothy L. Sayers. My great uncle was a great reader of crime fiction, although he wasn’t particularly into Sayers. He introduced me to Agatha Christie, Ngaio Marsh and company.

I think my reading as an adolescent has formed the kind of books I write. I discovered hard science fiction at about the same age I discovered historical and crime fiction…I graduated via fantasy—Anne McCaffrey and Katherine Kerr. I still read across a lot of different genres, although I don’t read much straight romance. I prefer the relationships I read about to be LGBTQ+ in some way and I like a lot of side-plot and/or suspsense if I’m reading romance.

Can I have two? The Left Hand of Darkness by Ursula Le Guin and Spectred Isle by K. J. Charles. The first because to me, it’s a perfect description of a non-binary society. And the second because of the way she writes about how the greenery around the magical well smells. You’ll have to read both of them to find out what I mean!

I’m working on the second in the Bradfield trilogy. It’s a romance between Sylvia’s sidekick and practice nurse, Walter, and a detective who comes to the village to solve a murder. I’ve also got the final story in the trilogy hovering in the back of my mind, a couple of reworked Celtic Myths squeaking in the dark back there and a possible companion novel to my 1780s story The Flowers of Time. Do I always feel that I’m running to catch up? Yes! Yes I do!

Thank you so much for talking to us today. I’m really looking forward to reading the book! 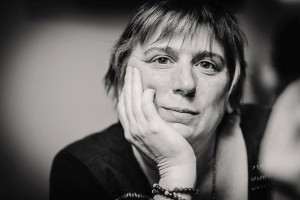 She likes permaculture gardening but doesn’t really have time or energy these days. Not musical, doesn’t much like telly, likes to read. Non-binary. Chronically disabled. Has fibromyalgia and tedious fits.

Join her newsletter for a free copy of the novella An Irregular Arrangement or find her on social media via her link-tree or at her website allester.co.uk.

Where to buy The Fog of War:

Ally was talking to Ruby Moone