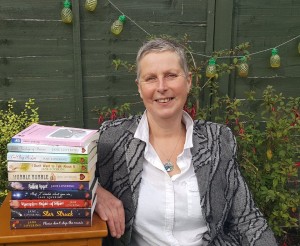 We welcome today Jane Lovering. Jane, what was the inspiration behind your book? Can you tell us a little about it?

I think it was two-fold. I’d been thinking about writing an ‘enemies to lovers’ book for a while, and then my daughter was telling me about an upheaval in her workplace where some people’s jobs had become uncertain. I think the two ideas came together in my head and eventually became nothing like the original idea. I found that I couldn’t ‘believe’ in falling in love with someone who had been a work enemy – I just couldn’t get over the fact that they would have to say unpleasant things or behave in certain ways. Anyone who did that to me would not be getting through my front door, let alone anywhere near my bedroom, however much they apologised. Some things can’t be forgotten or unsaid. So it became a book about two people who both believe they have very good reasons for needing to hang onto their job, competing for it, but as wary friends rather than enemies.

My heroine’s name came from the daughter of one of my customers (I work in our local Co Op). I was at that stage of ‘trying on’ different names by finding people of the right sort of age and asking their names. It’s not as odd as it sounds, I do do it in a subtle way! Well, subtleish. Subtle for me anyway. I already knew one Ruby, and when another one came up I thought it was the Universe’s way of telling me it was the right name for my character.

My hero needed a short, name that sounded very ‘modern’ to encapsulate the kind of person that Ruby thinks he is. Trendy, a ‘children’s TV presenter’ sort of name (he isn’t, but she repeatedly thinks of him that way as he’s so over-bright and breezy). I tried a few, but in the end Jake stuck.

I set it in York because it gave my characters lots of chance to ‘be somewhere’ outside the office yet in an identifiable space. As Midwinter Match is chiefly an Office Romance, I wanted them to be able to interact socially in places that readers could point to on a map and therefore I needed it to be a place I know well. I mainly know the area outside my front door and York, and the area outside my front door isn’t that interesting. So York it was.

I’ve been very lucky with lockdown. Although I’ve worked right through all the lockdowns (see above, re the job in the Co Op), not being able to go anywhere or see anybody apart from work has been very productive for me. I write best when I’m given an undisturbed length of time without any appointments, so having several months with no ties on my time (apart from…well, yes, see above) was great. I started the book in October 2020, finished it in January, put it away for a few weeks, then tidied it up and it was with my editor in February. Because of the way I work, there isn’t a lot of rewriting to do, I suffer mostly with timelines but this being a Christmas book meant that I tended not to wander about too much, timewise. As to editing, this mostly involved calming-down my heroine so she stopped making bitchy remarks, and beefing up the setting. ‘Add more York’ were, I believe, my editor’s exact words.

I hesitate to say, because it makes me sound very ‘worthy’ and hardworking, but I’m really not! I wake up, make a cup of tea and bring it back to bed, let the dog in the bedroom and then write for a couple of hours. Then dog and I go for a five mile run in the countryside where I live, I come home, shower and change and go off to the day job.

See, I told you it sounded ‘worthy’. But really it’s me waking up, muttering around the house for twenty minutes because I can’t find the fork to feed the cat, going back to bed with a GIGANTIC mug of tea, doing five minutes of writing, bouncing about on social media, checking Reddit for stories, interacting on a couple of my favourite forums, sending funny pictures to my kids, staring out of the window, reassuring my kids that I’m not going senile when they all text to ask why I sent them a strange picture of my socks, writing for another five minutes, then having to get up because I desperately need the loo because of the gigantic mug of tea. Then I flail around the lanes for an hour or so because I’ve got a high-needs dog who wants to tow me down the road and then chase rabbits in the fields. Going to the day job comes as something of a relief, to be honest.

I’m a few chapters into a book about a haunted house that explodes, a missing husband, a ghost hunting PhD and a heroine with self-esteem issues. All set on the North York Moors. Probably in the rain. And I’m reading and researching the book after that, about a reality TV show chasing Alien Black Cats and trying to film them. Also on the North York Moors, and DEFINITELY in the rain.

Read. Read a lot. You learn so much about how to structure stories from just reading them. Also, write and don’t give up, but also don’t expect your first piece of writing to be successful, look on it as practice. Almost everyone I know has thought their first finished novel was a masterpiece, until they’d written another couple of novels, when they look back and realise that it was a good idea in search of a plot. Like everything else, you improve with practice.

Also, find someone who will read your work and give honest feedback. NOT usually a member of your family, who knows that their chance of ever getting another cooked meal will vanish if they tell you your novel lacks structure and you use the word ‘eventually’ in every sentence. Find someone, they don’t necessarily have to be another writer, who will tell you exactly what they think, and why. Then it’s up to you whether you change things or not.

So, yes. Read and write.

Jane has been a published author of romantic comedies since 2008.  Her novel ‘Please Don’t Stop the Music’ won Romantic Novel of the Year in 2012 and Best Romantic Comedy the same year, and she subsequently won the Short Romantic Fiction of the Year title in 2018 and Best Fantasy Romantic Fiction in 2019. She calls what she writes ‘dark, psychological romance – with jokes.’ She has also co-written ‘How to Write Romantic Comedy’ with Rhoda Baxter. Jane is published by Boldwood Books.

She lives in North Yorkshire, and firmly believes that housework happens to other people.  For all those people who think that writing novels is a quick road to fame and fortune, Jane would just like to add that she also has a day job – driving a till in a local convenience shop, which provides plenty of opportunity to study human nature at work.