A warm welcome to Catherine Kullmann to the blog today to talk to us about her latest release, A Comfortable Alliance. Catherine, we are delighted that you could join us. Could you tell us a little more about it? 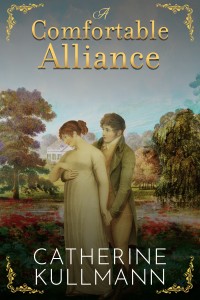 Thank you for the invitation to the Hot Seat. I am delighted to be here.
A Comfortable Alliance is set in 1821/22. Six years previously, Helena Swift’s fiancé was fatally wounded at Waterloo. Locking away all dreams of the heart, she retreated to a safe family haven. On the shelf and happy to be there, Helena has perfected the art of deterring would-be suitors.
Will, Earl of Rastleigh, is the only son of an only son: marriage is his duty. One of the great prizes of the marriage market, he shies away from a cold, society union. While he doesn’t expect love, he seeks something more comfortable. But how to find the woman who will welcome him into her life and her bed, and be a good mother to their children?

When Will meets Helena, he is intrigued by her composure, her kindness and her intelligence. As their friendship develops, he realises he has found his ideal wife, if only he can overcome her well-known aversion to matrimony.

Will succeeds in slipping past Helena’s guard. Tempted by the thought of children of her own, and encouraged by her mother to leave the shallows where she has lingered so long, she accepts his offer of a marriage based not on dangerous love but affectionate companionship and mutual respect.

But is this enough? As Will gets to know his wife better, and the secrets of her past unfold, he realises that they have settled for second-best. Can he change the basis of their marriage? Will Helena risk her heart and dare to love again?

How did you decide on the names for your characters and the setting for your book?
Taking the setting first, I find the extended Regency period from, say, 1795—the year of the later Prince Regent’s marriage—to 1830, the year of his death as George IV—fascinating. The events of this period include the Act of Union between Great Britain and Ireland of 1800, the Anglo-American war of 1812 and the twelve years of war that ended in the final defeat of Napoleon at Waterloo in 1815, all of which continue to shape our modern world

The names have to sound and feel right for the characters, and also be right for England during the period. I have a 1945 edition of The Oxford Dictionary of English Christian Names that explains the usage of names over the centuries, and a 1901 Dictionary of English and Welsh Surnames to keep me on the straight and narrow. When it came to titles, it was a question of making up something that sounded right and then double checking that that title did not actually exist.

How long did the book take to write? How much re-writing do you normally do?
There is a long story behind this book. I started writing it in 2010. I took early retirement following my successful treatment for breast cancer in 2007/8 and once my brain had cleared of chemo-fog, wanted to do something creative. I had always wanted to write fiction and now suddenly had the time. I read Elizabeth George’s book Write Away, which gave me useful hints on preparation including plotting and character development and literally set pen to paper. The story grew organically, and a year later I had a finished first draft.

During that time, I became aware of the NWS and was successful in securing a place in 2012. Rather than submit the book I had finished. I decided I would write a new book. This was Perception & Illusion. While Perception & Illusion was being assessed by the Reader, I started The Murmur of Masks which was, in the end, the book I first published. The Murmur of Masks was the beginning of my Waterloo Arc—books set in England against a background of the mostly off-stage Napoleonic wars that consider in particular the situation of women affected by them. Because A Comfortable Alliance is set in 1821/22 and deals with what today we would call the heroine’s PTSD following the death of the man she loves, I set it aside, to be revised and published at a later date. The Potential for Love, which was published last year, was set in 1816 and dealt with the immediate aftermath of Waterloo. A Comfortable Alliance closes the arc.

I re-write a lot. I am a pantser rather than a plotter, or, to put it another way, I plot while writing my first draft. I revise and edit as I go. I then let a book rest for couple of months before doing a major edit. It then goes to my beta reader and that leads to yet another edit. I am passionate about the fall of words and the rhythm of language. There should be nothing that causes readers to pause or jerk them out of the reading zone, so any clumsy writing that might cause them to stumble must be refined.

What is your writing day like?
As an indie author, I am responsible for my marketing and publicity. First thing in the morning, I start the ball rolling by tweeting. I then have breakfast, read the paper, do the crossword and the daily chores. I am at my desk by 11.30 at latest. I work until roughly 1 p.m. and have lunch and a rest, then I work from 3 p.m. to 6 or 6.30 p.m. when I stop to cook dinner. If the book is going well, I might go back to the desk afterwards, but not always.

What kind of research did you do before beginning the book?
The first thing I did was go through my bookshelves and put together all the books that related to the Regency period. I was delighted to find that I already had the nucleus of a research library that has since grown considerably. Because this was my first book, I also had to research a lot as I wrote—details about coach travel, for example and all the day to day trivia and minutiae that make a book come alive. I also researched the historical events of the time during which the book took place as they help to provide a framework for it.

Where did your research for the book take you?
The most interesting place was the coronation of the Prince Regent as George IV. I would have loved to go to town on it, it was so over the top, but had to content myself with including little nuggets in conversation as a detailed description would have stalled the momentum of the story.

What book do you wish you had written?
Frederica by Georgette Heyer. Heyer is at the top of her game here. Her historical background is impeccable, she drives her extensive cast of characters to an inch as she steers them through the convolutions of her plot while never losing sight of the love story that unfolds to the surprise of the hero and heroine, but not to the reader who is cheering from the side-lines. 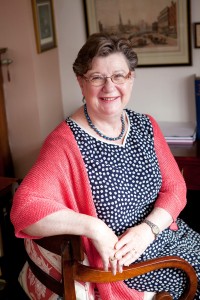 Catherine Kullmann was born and educated in Dublin. Following a three-year courtship conducted mostly by letter, she moved to Germany where she lived for twenty-five years before returning to Ireland. She has worked in the Irish and New Zealand public services and in the private sector. Widowed, she has three adult sons and two grandchildren.

Catherine has always been interested in the extended Regency period, a time when the foundations of our modern world were laid. She loves writing and is particularly interested in what happens after the first happy end—how life goes on for the protagonists and sometimes catches up with them. Her books are set against a background of the offstage, Napoleonic wars and consider in particular the situation of women trapped in a patriarchal society.

She is the author of The Murmur of Masks, Perception & Illusion, A Suggestion of Scandal, The Duke’s Regret, The Potential for Love  and A Comfortable Alliance

Catherine also blogs about historical facts and trivia related to this era. You can find out more about her books and read her blog (My Scrap Album) at her website You can contact her via her Facebook page or on Twitter 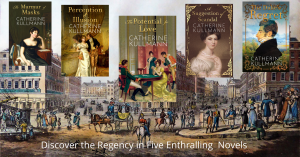 Catherine was talking to Ruby Moone.