We are delighted to welcome Lynne Shelby to the blog today to talk about her new release, Love on Location. Lynne, could you tell us more about it? 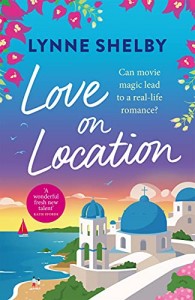 My new release, Love On Location, is a contemporary romance. In the book, when up-and-coming screenwriter Laurel Martin is hired to rewrite the screenplay for a new timeslip movie, she expects her historical advisor to be an elderly academic who won’t interfere too much with her writing. But when she meets Professor Jason Harding, a young and unexpectedly handsome archaeologist who has his own ideas about the script, she realises the job isn’t going to be as simple as she first thought…

On location on the idyllic Greek island of Kyros, Laurel and Jason’s relationship starts to echo the romance of their screenplay. Can movie magic lead to a real-life love story?

The inspiration to tell the story of Love On Location began on a holiday to Greece when I realised that I simply had to set a novel in this beautiful country. By the end of the holiday, I had my main characters, the idea that they were on location, making a film on a Greek island, and the basic outline of the plot. Like my screenwriter heroine, I think there are few places as exciting as a film set!

Love On Location took me roughly a year to write from having the initial idea to typing The End on what I thought was the fourth and final draft, three or four drafts being what I usually write. Then I realised that I’d started the story in the wrong place and needed to delete the first chapter – which had a huge impact on the rest of the book! I also decided that the ending didn’t feel right. It took me another three weeks to re-structure the entire manuscript, and also re-write the ending!

I always enjoy the research stage of writing a novel, including finding out about the jobs that my heroine and hero do. In Love On Location, Laurel, the heroine is a screenwriter. By chance, just before I began writing the book, one of my relatives used our house as the unit base when filming a short movie, giving me the opportunity to have a long chat with the screenwriter about the whole process of screenwriting (and take notes!), which was in the back of my mind when I wrote about Laurel and her enthusiasm for the movies.

Jason, the hero, is an archaeologist, and passionate about his work, so I listened to podcasts and watched YouTube videos by archaeologists taking about what they do – if I wasn’t an author, I’d like to be an archaeologist!

My novel is set on a Greek island in the twenty-first century, but the screenplay Laurel is writing is set in ancient Greece, and although they are only mentioned in passing in the book, I read up on ancient Greek legends and history, especially about Troy, so that I had a feel for what she was writing, even if it wasn’t on the page.

Although most of the research I did before beginning writing didn’t make it into the book, I still found it so useful to know as background to my story.

Love On Location begins in London before Laurel and Jason fly out to join the film crew on location on the fictional Greek island of Kyros – which is inspired by my visits to the beautiful islands of Santorini and Kefalonia – travelling via Athens. After I’d written the first draft of the book, I went on a research trip to Athens and walked the route through the city taken by Laurel and Jason, to check I’d remembered it correctly from previous visits. I also re-visited Santorini to remind myself of the atmosphere of a Greek island that I wanted to create in the book. Not that you need research as an excuse to visit Greece!

Never give up your dream of publishing your novel, because dreams really do come true.

My current WIP is a contemporary romance set in Rome, one of my favourite cities. I’ve been doing some on-line searches for areas in Rome where my heroine could live, and also researching Italian painting, so now my newsfeed is full of estate agents recommending gorgeous Italian apartments to buy and auction houses suggesting I bid on an Old Master! Sadly, I won’t be doing either, although my characters might! 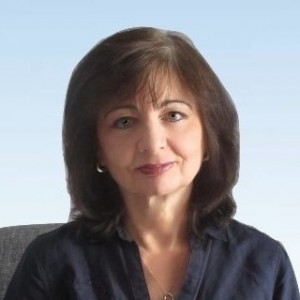 Lynne Shelby writes contemporary women’s fiction and romance. She was first published when her debut novel, French Kissing won a national writing competition. When not writing, reading or watching a movie, Lynne enjoys visiting the theatre or exploring a foreign city with her writer’s notebook, camera and sketchbook in hand. She lives in London with her husband and has three adult children who live nearby.

Lynne was talking to Ruby Moone.