This month, we’re shining a spotlight on the 2021 RNA Industry Award nominees. Indie Editor of the Year recognises an editor who has worked on an independently published novel that falls within the scope of romantic fiction, and who embraces the genre, supports writers to produce their best work, and is innovative, creative, and visionary in the marketing and promotion of romantic fiction on every level. 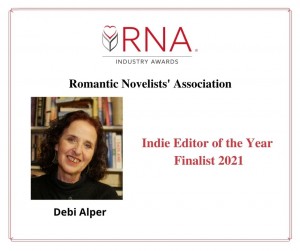 Debi Alper
Debi Alper is an author, freelance editor and creative writing tutor. Since 2006, Debi has spent her time helping other writers to perfect their novels through critiques, mentoring, Book Doctor sessions and creative writing workshops. She also runs the phenomenally successful Jericho Writers’ Self-Edit Your Novel course, together with Emma Darwin. An astonishing one in four authors from the first five years of the course are now published. Debi also acts as a competition judge, is on the jury for the London Independent Story Prize and is a reader for the Costa Short Story Awards.
Twitter: @debialper 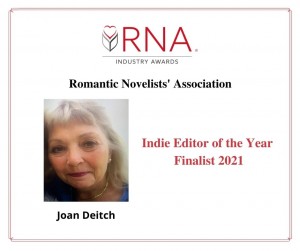 Joan Deitch
Joan Deitch always wanted to work in publishing. Following her degree, she worked as Editorial Assistant at W.H. Allen, now part of the Virgin publishing empire. She then became self-employed and worked for some of the big publishing companies as a regular copy editor and proofreader in many different genres, but mainly in crime novels and women’s fiction. During this time she was ‘let loose’, as she says, on works by some very well-known authors including the late Penny Vincenzi, Carole Matthews, Milly Johnson, Rosie Goodwin, and Jilly Cooper. Nicola May is also on her list as a huge indie success, now published by Hodder. When e-publishing came on the scene, Joan left the mainstream and started working with indie authors, and also with pioneer indie publishers like Rosemarie Hudson of HopeRoad Publishing and Humfrey Hunter of Silvertail Books. 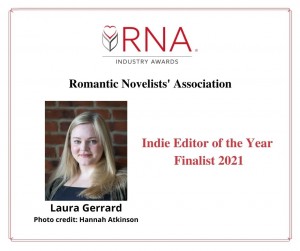 Laura Gerrard
Laura Gerrard is a freelance editor with over a decade of experience in the publishing industry. Before becoming freelance, she was a commissioning editor at Orion where she worked with many award-winning, and Sunday Times and New York Times bestselling authors. Previously, Laura worked at Hodder & Stoughton and has also interned at Blake Friedmann Literary Agency. She has a degree in English Literature from the University of Leeds and an MA in Publishing from University College London. Laura has appeared on multiple panels for the RNA and was also on the judging panel for the Crime Writers’ Association Debut Dagger Award in 2015.
Twitter: @lauragerrard