We are delighted to welcome Sandy Barker to the Blog today to talk to us about her new release, The Dating Game. Sandy, could you tell us more about it? 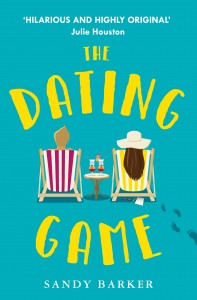 I’d love to! Abigail ‘Abby’ Jones has a secret identity. While her dream is to be an investigative journalist, in her ‘day job’ she is the Anastasia Blabbergasted, Queen of Snark and illustrious recapper of British reality television shows for online magazine, Feed Your Mind.

When her recap of reality dating show, The Stag, goes viral, the show’s producers practically insist that she joins next season’s cast, undercover as a Doe – won’t that make her recaps all the spicier?! Abby’s editor, Prue, is all for the idea but Abby can’t think of anything worse – even though next season is filming in Sydney!

That is until Abby meets gorgeous Australian, Jack – rescuer from murderous elevator doors and the producer of the show. With the opportunity to write a juicy tell-all, and perhaps break out of recapping once and for all, a free trip to Sydney, and (let’s face it) more time with the gorgeous Aussie, Abby looks on the bright side, donning a whole new persona as ‘Doe Abby’.

The adventure (really) begins in Sydney when Abby meets the rest of the cast – eleven other Does and Daniel, the Stag – while failing miserably to keep her crush on Jack in check. Lots of madcap fun and romantic adventures ensure – all with the backdrop of one of the world’s most beautiful cities.

This was such a fun story to write. The idea sparked last year when colleagues put together a sweepstakes for the latest season of The Bachelor – if you drew the ‘winning’ Bachelorette, you won the pool. I started writing recaps after each episode, which (quite honestly) were more fun than a rather dull ‘love in lockdown’ season.

An author friend, Andie Newton, read one of the recaps and said, ‘You need to write this as a book – write about the woman who writes the recaps.’ Genius. I pitched it to my agent, Lina Langlee, who asked me to write the first chapter. ‘Show me who she is,’ she said. The first chapter included a recap and Lina loved it, especially the snark of Anastasia and the gentle soul behind her, Abby. I wrote a synopsis, we pitched it to One More Chapter, and here we are!

Choosing character names can be torture for me – I am constantly plagiarising myself. I also have a worrying obsession with ‘J’ names – this is my fourth love interest whose name starts with J! (Josh, James, Jean-Luc …). The most fun was naming Anastasia – I wanted a complex, multi-syllable name that rolled off the tongue and was a play on words to contrast with ‘Abby Jones’. When I landed on ‘Anastasia Blabbergasted’ I knew I’d cracked it.

I also loved naming the eleven other Does – five Brits and six Australians. I chose their names to evoke their characters. Favourite names include Kaz, a brash and hilarious Aussie, and Daphne, a snooty British blue blood.

I opted for London and Sydney as my two settings, as they reflect me – born and raised in Australia, but also half-British. I called London home for a couple of years and it is still one of my favourite cities – and Sydney was home for a decade. Both are close to my heart.

I started writing this book in October last year and it took me around three months to get the story down, wrapping up in mid-January – all while working fulltime (I write in the mornings before work and on weekends). Once I finished the manuscript, I read through and revised it several times – each revision, refining it further. I say it’s like passing it through a colander, then a sieve, then muslin. Once my new editor, Jennie Rothwell, started at One More Chapter in May, we completed two rounds of edits – structural and line edits, then copy edits – in four weeks (phew)!

I am a ‘plantser’ – when I start, I know who the characters are and the general storyline, but the details come to me as I write. Initially, the love interest was a cameraman, but once I started writing, I introduced ‘him’ much sooner – Abby meets Jack in London instead of on set in Sydney. That was much more fun and really kick-started the narrative.

‘Plantsing’ also has its challenges though. I created such intricate machinations of the show itself (‘The Stag’), that when I got to the climax of the book, I had a giant plot knot to untangle. How was it all going to resolve? I percolated for a few days, and then it came to me one night while reading in bed. I leapt up, grabbed my notebook and scribbled out the end of the story, pulling all the threads together. I love how the book ends.

My ‘advice’ is always two-fold – about the craft and about the biz.

The craft: get the story down. Make time and tell your story in your unique way. Then read it as a reader would. Then revise it and refine it until it is the best version of your story that it can be.

The biz: If you are pitching to agents or publishers, the synopsis and query letter are the most important pieces of writing you are working on. Agents and editors can see past structural issues and grammatical mistakes, but if you don’t hook them with that letter and if that synopsis doesn’t ‘sing’ – it must not only recount the story but also capture your unique voice as an author – then you may not get the chance to show them your work.

Yes! I have just started book 5 in the Holiday Romance series, A Wedding in Tuscany. Book 4, Under Bali Skies, will be out in February 2022 and this one will follow in May. This series started with One Summer in Santorini and centres around the Parsons sisters, Sarah and Cat. In Tuscany, one of them is getting married (no spoilers for now) and it is incredibly fun to write this as a dual narrative, switching between the sisters’ points of view. 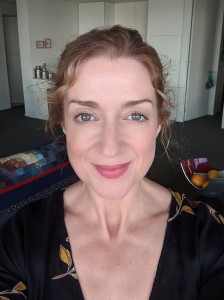 Sandy is a writer, traveller and hopeful romantic with a lengthy bucket list, and many of her travel adventures have found homes in her novels. She’s also an avid reader, a film buff, a wine lover and a coffee snob.

Sandy lives in Melbourne Australia with her partner, Ben, who she met while travelling in Greece. Their real-life love story inspired Sandy’s debut novel One Summer in Santorini, the first in the Holiday Romance series with One More Chapter, an imprint of HarperCollins.

The series continues in That Night in Paris and A Sunset in Sydney and there are two more to come in 2022. Her standalone novel The Christmas Swap celebrates her favourite time of the year, and next up is The Dating Game, a laugh-out-loud romcom set in the world of Reality TV.

Sandy was talking to Ruby Moone.