Francesca Capaldi – Hope in the Valleys

We are delighted to welcome Francesca Capaldi to the blog today. Francesca, what was the inspiration behind your new saga, the third in the Wartime in the Valleys series? Can you tell us a little about it? 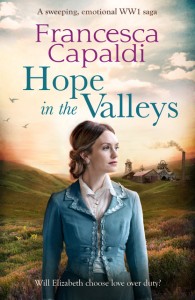 Although Anwen and Idris were the initial focus of the series, in Heartbreak in the Valleys, I found I’d created other characters who had a story to tell. My original intention was to keep to the point of view of the working class characters, and Hope in the Valleys was going to be Gwen’s story alone. But I felt myself drawn to the mine manager’s daughter, Elizabeth. I wondered about the experience of a woman like her, between two worlds. Her life and Gwen’s had clashed in the second book, War in the Valleys, so I decided to bring some further parallels into their lives in Hope in the Valleys.

Do characters from the first two books appear in this one?

Most definitely! All four books (there’s another one due out in the spring) are full of the same characters. It’s just the focus of the story that changes.

What drew you to writing historical fiction and specifically about Wales in WW1?

I’d been enjoying writing contemporary romance, but having a history degree, a few people had asked why I’d not considered writing historicals. I hadn’t had any real inspiration to do so until a ‘hint’ popped up on my Ancestry.com account, pointing me towards a First World War record that turned out to be that of a great-grandfather on my Welsh mother’s side. He’d enlisted in March 1915 but was given a medical discharge several months later, while still training, due to severe tachycardia. I wondered how he might have felt about being left behind when his pals were going off to war, and so was born the idea for Heartbreak in the Valleys.

Tell us about your path to publication.

In 2006, I joined a creative writing class run by Elaine Everest and started writing short stories. In 2008, I had the first of many short stories published, in the now defunct Weekly News. My dream had always been to write a novel, so I went on to do Elaine’s novel class. I joined the RNA New Writers’ Scheme around this time, started writing Young Adult novels and was shortlisted with one in the Wells Festival Children’s Book Award. Unable to find a publisher, I wrote three contemporary romances, but it was the fourth one that was published as a Woman’s Weekly Pocket Novel and allowed me to graduate from the NWS in 2018. I’d written Heartbreak in the Valleys by this time, and in 2019 was taken on by Hera Books via a one-to-one at the RNA conference.

Are there any creative writing classes or books that you’ve found particularly helpful?

As I mentioned above, I joined Elaine Everest’s creative writing class and then later her novel class. I attended these for many years and found the information and encouragement invaluable. I’ve also attended talks and courses at the RNA conferences, the Caerleon/Fishguard Writers’ weeks and the Swanwick Writers’ Summer School, all of which have been very helpful in learning about the myriad aspects of writing and publishing.

Do you ever suffer from self-doubt as a writer and how do you get over it?

Oh gosh, are there writers who don’t suffer from self-doubt? I constantly suffer from it and always think that what I’ve written is rubbish. It’s led to me eternally editing my work. I can’t do that so much now, with deadlines to meet. I think the support of other writers in readback situations plus the good feedback of magazine editors, my publisher and also readers, has encouraged me to believe I must be getting something right!

What are your top tips for new writers looking to get their first break?

Don’t give up, but don’t expect success to come overnight. It took me eighteen months to get a short story published, and then over ten years to have a novel published. I just kept at it. Always listen to advice and criticism and sift through it to decide what will help your writing – and what won’t. Learn from your mistakes. And read the genre you want to write in.

What is your writing day like? Do you have a room of your own for writing? Is writing your full time job?

Writing is my full-time job currently. I have a study at home where I keep everything relevant and in which I work much of the time, but I also like to move around. Sometimes I’ll sit in the dining room, where I can see the garden. In the summer I like to sit outside (weather permitting!). Sometimes I go to a café to work, just to get out. My working day depends very much on what’s happening, whether I’m writing or editing, or in the throes of publicity. I prefer to write in the daytime and don’t often do it in the evening, when I’m more likely to do research.

What are you working on next?

At present I’m in the editing process for the fourth Valleys book, Trouble in the Valleys. After that, well, it’s still hush hush at the moment, as I’m working on a new idea for a series. It will take place in World War 1 again though. 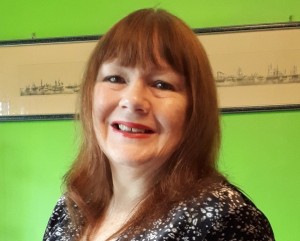 Francesca has enjoyed writing since she was a child, largely influenced by a Welsh mother who was good at improvised story telling. She is a member of the RNA and the Society of Women Writers and Journalists. Francesca currently lives in Kent with her family and a cat called Lando Calrissian.

Francesca  was talking to Ruby Moone