Lorna, tell us a little about your upcoming book, The Dressmaker’s Secret. Where did your inspiration come from? 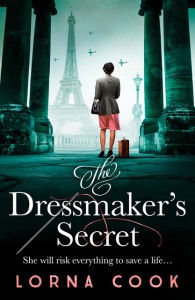 Ooo, I’m really excited about seeing this one come out at the end of January. The inspiration for the novel came from an article I stumbled over about Coco Chanel having been outed as a Nazi agent. It was so intriguing that I couldn’t stop reading. And then I discovered that missing files had been released in French archives that had her Nazi agent name and code number and after that I couldn’t get the idea out of my head. Real life missing files being located and a secret history being discovered is like catnip to me! The story focuses on Chanel’s fictional assistant Adele and the role she plays in Paris during Nazi Occupation.

All three (soon to be four!) of your novels are dual-timeline. What attracted you to the idea of writing interlocking narratives in two different time periods?

Do you know – I have no idea! It just felt like the most natural thing to do. I adore dual narrative books. Kate Morton is my absolute fave and so when I started writing The Forgotten Village, my first novel, I started with a mystery in the 1940s and then in the next chapter I naturally just set it in 2018. It was a bit of a subconscious decision. Although for my next historical, my fifth, I am trying something a bit different where I may not have a contemporary strand to it. We’ll see if it works or not!

How do you go about structuring your dual-timeline novels? Do you start by writing each story separately and then find moments where they weave together, or are you writing them in tandem from the first day of outlining onward?

I do plan a bit. But I do something different every time. I usually just get an A4 notepad, draw a line down the middle and on one side have the past section and on the other the present day section and I litter the page with arrows showing what happens first and then how that leads on to what happens in the other timeline. I go through many sheets of paper like that. But I do write in the order in which you’d end up reading it. One chapter in the past, end on a bit of a hook, switch back to the next timeline and so on and so forth. I hope it keeps things pacy because I’m forever itching to switch to the next timeline no matter which one I’m writing.

What made you choose to write about the 1940s? What do you find most interesting about that time period?

I’m a not so secret war-bore. I love the history of the Home Front in Britain and what women went through and the various ways in which they coped. In my previous novel, The Girl From the Island, I covered the Occupation of Guernsey and, for The Dressmaker’s Secret, this is the first
time I’ve left Britain and its Isles to discover the history of what women went through in France. Of course there were outrageous hardships, but most women’s stories of this time show a time of great upheaval but also great responsibility and of coming into their own.

What is your writing day like? Do you write early in the morning or after everyone’s gone to sleep? Do you go to a coffee shop to write or do you have a nook in your house? Do you have to balance writing with other obligations, and if so, how do you make it work?

I have my own office at the top of the house with views of the sea. I’m very lucky to have my own space and to be a full time author. I installed a Nespresso machine up here so I wouldn’t have to keep going downstairs to make coffee. Because once I’m downstairs, I’m suddenly doing the laundry or the dishwasher or prepping dinner so this keeps me upstairs, working alittle longer. After I’ve dropped the kids to school I come home and walk the dog and listen to writing podcasts or an audio book. Then I faff
around in the kitchen a bit doing odd jobs and then I go upstairs and go to work until it’s time to break for lunch. Then I keep working until it’s time for the children to come home. After that I can’t go back to work again. I just don’t have the brainpower after a whole day in the office. And I like family time. I like to get the kids to their various clubs and to cook dinner and sit down together and find out what’s been going on in everyone’s day.

Tell us a little about your path to publication. How did you get your book deal?

Short answer: The RNA New Writer’s Scheme! Long answer: I had some great one-to-ones with a couple of agents at one of the conferences that spurred me on to submit to both of them after they requested to read the full manuscript of The Forgotten Village. One was a near miss, one was a very very near miss and then I submitted to a few specific agents and had offers from both, which I still find unbelievable. After I got my wonderful agent Becky Ritchie, she submitted and got my first book deal in the UK with Avon. After that her foreign rights team placed the book in other countries and I’ve got editions of my books in Italy, Greece, Portugal, Isreal, Norway, Denmark…

As a graduate of the New Writers’ Scheme, how did the program impact your development as a writer? What’s the best piece of advice you received in your reader reports?

My reader report was by the wonderful Alison May and she gave me such sound advice and really took the time to write a seven or eight page report. She was very careful to say something along the lines of, ‘this is your book so you do what feels right,’ while still offering a few solutions whenever she saw something that needed work. This is also what my first editor echoed to me at Avon. She’d offer an opinion on what wasn’t working and would offer a handful of potential solutions that might work rather than stipulating just one. It gives you time to think and work through various options and pick the one that feels right for the story and the characters.

You received the Joan Hessayon Award for your debut novel, The Forgotten Village. What was hearing your name announced at the awards ceremony like?

It was very odd to hear my name read out. I was so shocked I think I just blinked rather than standing up for a while. I didn’t say anything remotely profound when I accepted my award. I think I cried a bit.

You’ll be releasing your contemporary debut novel in spring 2023. What prompted you to make the switch from historical to contemporary?

I just had a story in my head that needed to be released! I write a contemporary strand to my historicals (so far!) and so I’m no stranger to that style of writing but The Man I Never Met is a very different sort of
story to what I’ve written up to now. There’s still the same epic romance winding through the book and actually now I think about it, there’s a bit of a mystery in there too but it’s not historical.

You’re now writing under two different names: Lorna Cook and Elle Cook. Was that an easy decision for you to make when you decided to write in a new genre, or is it strange seeing a different author name on your book?

It’s going to be very odd seeing a name that’s not actually mine on the cover of one of my books but I chose Elle because it’s just the first letter of my name, L, spelled out phonetically. Not very imaginative for a writer is it! But because the two strands of my writing are quite different from each other and because I’m lucky enough to have two different publishers, it means each publisher can work on marketing and branding each of my names and the direction they want to take the books
without it affecting the other. I just hope no one calls me Elle to my face because I probably won’t remember to answer. 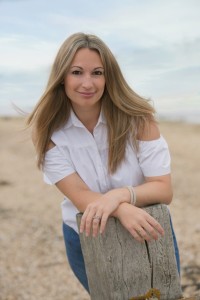 LORNA COOK is the author of the Kindle #1 bestseller The Forgotten Village. It was her debut novel and the recipient of both the Romantic Novelists’ Association Katie Fforde Debut Romantic Novel Award and the Joan Hessayon Award for New Writers. Lorna lives in coastal South East England with her husband, daughters and a Staffy named Socks. A former journalist and publicist, she owns more cookery books than one woman should, but barely gets time to cook.

Lorna was talking to Ruby Moone