Suzie Hull – In This Foreign Land

We are delighted to welcome Suzi Hull to the blog today to talk to us about her debut novel, In This Foreign Land. Suzi, could you tell us more about it? Where did you get your inspiration from? 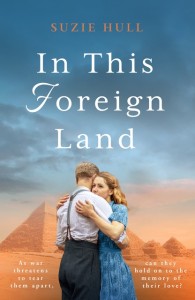 My debut novel is called In This Foreign Land and it starts in Spring 1914 in Cairo, and then mainly in London, a little bit of Belfast too. It features Isobel Harris, an artist, and two brothers, Edward and Wilfred Dunwoody, all childhood friends from Belfast. It has been described as an ‘epic love story’ and ‘rich in historical detail’. I’ve always loved reading historical romances so I think it was only a matter of time before I started writing them. I happen to love films with a really gripping romance story, like Titanic (with Jack and Rose), and also Last Of the Mohicans, and I wanted to recreate a really dramatic love story. Other than that, I just knew I loved the Edwardian/WW1 era and it went from there.

What made you choose Egypt as the setting for your novel?

I have absolutely no idea except that I just knew I wanted to set it there. Call it a gut feeling. However, that gut feeling was spot on because as I started to write it, and struggled with researching the travel details and the setting, I discovered that my sister had just transcribed two travel diaries belonging to her husbands’ family, from 1907/1908. Two women who had also travelled out to Cairo, and recorded all the details of how they got there, where they stayed etc. Let’s just call that fate!

What’s your writing day like? Do you balance writing with other obligations, and if so, how? Do you have any special writing routines?  Or a space in your house that’s specifically reserved for writing?

Currently I work Mon-Friday as a classroom assistant in a Primary One class here in Northern Ireland, (equivalent to Reception in England). When I get home I am either so tired I have a nap, or I start writing. The two lockdowns were very useful for me as I was at home several days a week and got so much more achieved. I don’t really have a strict routine, it’s just when I can fit it in. I am rather a messy writer so I’ve taken over the dining room table. A desk isn’t quite big enough for me.

You were a member of the NWS for eight years before publication. How has your writing evolved during that time? Have you switched genres, experimented with different tenses/POVs, or changed your writing style?

I first started writing when my oldest girl was a baby, she’s now twenty-six, but I also subbed a couple of children’s books before that. It took me a long time to find other writers to connect to, as I live in Northern Ireland, and I had no clue as to how I could improve and also which publishers to submit to. The improvement of internet really helped and finally I stumbled across the RNA New Writers Scheme online, but it was still a few years before I finally joined. My first submission was a very long Maeve Binchy style, Irish contemporary saga  – it had taken me fifteen years to write it! My second was much shorter, a Christmas contemporary romance set in Belfast. My third (which was this book) originally started as a dual-timeline, and went through the scheme twice as a dual, once as a pure historical. I also subbed another  #WW1 partial. I think I was always able to write some aspects reasonably well, but my plotting left a lot to be desired!

How did you persevere through during the tough times and near misses?

I cried a lot! I got very frustrated and wanted to give up plenty of times, but I never did. I am sure that resonates with a lot of writers. If I’d given up I knew I’d have absolutely no chance, so it was just a case of chin up; carry on. Sometimes I stopped writing for long periods, but I was always drawn back to it again. Once I joined the NWS I just kept at it.

Did In This Foreign Land go through multiple passes with the NWS or just one? How did your manuscript change from its first draft to the published version?

I think the biggest change in the novel over the years, is that it used to be a dual-timeline, and now it’s purely historical. But even when it was a dual-timeline it constantly changed. All that rewriting was good practice.  As I mentioned above, In This Foreign Land went through three times. Twice as dual-narrative, once as straight historical, but over four years in total. It changed name at least three times too. I had to cut out the most amazing prologue, and all my favourite early scenes, but, as someone said, they were just me getting to grips with the story. The story didn’t start until Isobel arrives in Cairo and meets up with her childhood friend Edward. When I finally got rid of the contemporary timeline, I ripped out about 60,000 words and had to fill out Edward’s and Isobel’s story in full. I probably wrote 300,000 words in total, but it still wasn’t quite right. It was Alison May who suggested that I still hadn’t got to grips with Isobel’s character. I had been so busy plotting I’d forgotten to really get to know my character. Once I stopped and thought about what Isobel would do, (a modern girl for the time, determined to marry for love and not lose her own identity), it all fell into place.  I just kept at it until it felt right.

Tell us all about how you got your book deal! (Whatever you’re comfortable sharing!)

Late 2018 I saw a publisher asking for #WW1 or #WW2 novels set abroad. So I replied saying I had one set in Cairo. They asked me to submit, which I did, and they then suggested some changes, which I did, but ultimately it was rejected. However they suggested I rewrote it as a pure historical, rather than a dual-timeline and then re-submit a few months later. I didn’t do this as I was sick of the sight of the book and decided to self-publish a medieval novella instead! (New Writers don’t do this! If the publishers ask for you to revise and resubmit, that’s a good thing. Don’t ignore the opportunity.) Roll on Lockdown One, and I had more time to re-visit the novel and I booked a consultation with Alison May and finally re-wrote it and subbed it again into the NWS. At the 2020 Virtual Summer Conference I had just one appointment with Charlotte Mursell who was with Orion. She really liked it and asked for the full. I waited for my readers report to come back before making any more changes, and also consulted Alison May again,  and then rewrote the book, again. I finally subbed to Charlotte in early December, plus another few publishers that were open to submissions. It became obvious that whatever re-writes I’d made had done the trick as Charlotte Mursell and another publisher came back fairly quickly in early January 2021.  I was sitting on the sofa one evening when I got an email from Charlotte and almost threw my phone across the room. She said she ‘absolutely adored it, but it wasn’t quite right for the Orion list’. I thought it was another rejection. It was my daughter that made me re-read the email, and we found the magic little words that said, ‘however I have passed it on to my colleague Rhea Kurien in Orion Dash and she will be in touch with you shortly.’ I still didn’t quite believe this was it, even when Rhea booked a phonecall with me, I was determined not to get my hopes up. So finally, after first starting to write over twenty-six years ago, I was offered my very first publishing deal!

Can you tell us anything about your next writing project?

I wrote the majority of Book 2 during lockdown January 2021. It was a partial that I’d subbed in the NWS three years ago. It is starts in 1914, and is set abroad, so a very similar timeframe to my first book. This time I have drawn on my own family background on my paternal Grandmother’s side. They were Quakers and their family tree is very well documented. I’ll not say any more about the plot, as it might very easily change during edits, but I was able to draw on family memoirs of the time. I really need something concrete to draw on first to inspire me and spark an idea for a story.

What advice would you give to aspiring authors working towards their first book deals?

If a publisher/editor asks you to do a revise and resubmit, do it! Other than that, DO NOT GIVE UP! Keep going! Also, use the 1-2-1s both with the RNA and any other opportunity you can. Publishers/agents/editors like to get to know you, they remember your face and it’s good to make a connection with them. It’s also useful to be able to put that in your query letter; ‘I met you at …’. One final thing; you are never too old to go after your dreams! 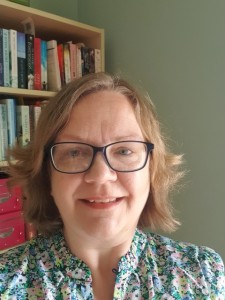 About the Author:
Suzie Hull lives in Northern Ireland with her family and numerous rescue cats. She originally dreamt of being a ballet dancer, but instead trained as a Montessori Nursery teacher and has spent the last thirty years working with children. She has always had an enduring passion for history and books, and since she came from a long line of creative women it was only a matter of time before she turned to writing her own. A member of the RNA, In This Foreign Land is her debut novel.

Suzi was talking to Ruby Moon