Julia Ibbotson tells us about her self-published time-slip novels

Welcome to the blog, Julia, and thank you for speaking with us. You have just published a series of 3 time-slip novels. Please tell us more about them.

They’re part of the Dr DuLac series which features Dr Viv DuLac, a medievalist who begins the series in A Shape on the Air with a traumatic betrayal by her partner that results in an accident at a local lake. But instead of drowning she finds herself in the body of 6th century Lady Vivianne who is herself struggling with betrayal – an unwanted betrothal to a man she hates. There is a mystery that needs them to work together across the centuries to find peace and ultimately find love again. For Viv the love interest is unexpectedly a local rector.

The Dragon Tree continues Viv’s story but this time the book is set in Madeira where she and Rev Rory have escaped after a tragedy, and involves a noblewoman shipwrecked on the island in the 14th century and a rebellious nun in the 16th century. They both reach out to Viv to solve the mystery of a dragon tree and two precious historical artefacts, and to bring peace back to the island. Viv needs peace herself as she begins to doubt Rory’s fidelity and finds herself tempted by the attractive founder of the local museum.

The third book is The Rune Stone in which Viv and Rory have returned to their Derbyshire country rectory where Viv discovers a strange runic inscription on a rune stone in the churchyard. This story returns to the 6th century Lady Vivianne who reaches out to Viv again for help. Does the rune stone commemorate her and, if so, why is there seemingly a runic curse on it? Once more there are dangerous implications threatening both of their lives.

Where did you find the inspiration for your characters?

I always have a clear idea in my mind of the character I’m portraying, in appearance and personality. But they’re hybrids drawn from different sources. I tend to pin up pics on my notice board like a ‘mood board’ for characters and historical contexts.

Sometimes there’s a particular person I think of for that ‘role’. For example, I have pics of James Norton as the Rev Sidney Chambers from the television adaptation of the Grantchester Mysteries by James Runcie as my inspiration for Rev Rory, the ‘hot vicar’. I suppose Sidney’s gentle supportive character beset  by human flaws was very much in my mind at the time! Also James Norton is gorgeous and I wanted Rev Rory to be gorgeous too!

I just love the character of Tilly, Viv’s friend, who is wonderfully crazy, quite outrageous and extravert, and very loyal and loving. She’s based on a mixture of a couple of people I know – absolutely the friend to have! My characters are usually inspired by a combination of various people I know, but no one person in particular.

You recently regained rights to your first novel and you are now self-publishing. Why did you make that decision and how are you finding your self-publishing journey so far?

I still have four books (including the Drumbeats Trilogy) published by a small trad publisher which will remain with them (so I guess I’m hybrid). But I felt that my publishers, lovely as they might be, weren’t as much invested in A Shape on the Air as I would have hoped in terms of promo, although I had two very successful Bookbub deals. And then (possibly because of lockdown and personnel change) they were a bit ‘on’ and ‘off’ about the next two sequels, which I’d written during the lockdowns. I wanted to get on with launching the series, especially as I’d had a bit of a gap since A Shape and before the next, so I decided to ‘go it alone’ with all three together. I needed the series with coordinating covers and formatting, so I regained my rights to A Shape on the Air from my publisher and forged ahead with self-publishing that and the two sequels together. It’s been a punishing period! I can’t honestly say it’s been a stress-free experience, but it’s been exciting and successful. And I can say: “I did it!”

So they’ve all finally just come out in ebook and paperback – relief!  It’s too early to say how successful the venture will be. Having had a publisher before, I found it absolutely terrifying to suddenly have to do it all myself. I won’t lie – I struggled. But RNA folks were, as always, amazingly helpful, especially on the Facebook RNA Indie forum. And there they are, out in the wide world at last, so we’ll see!

I’m not great at self-promo (understatement!) but I do have a book blog tour with the lovely Rachel Gilbey (RNA Media Star 2021) coming up in mid-February 2022 and I’m trying to organise a series of other promotional events (book tours, discount promo posts/deals, etc). I think the first day of the tour is February 14th so there’ll be tie-ins with Valentines and romance.

How did you get interested in writing time-slip novels? What is your favourite time-slip story (other than yours, of course)?

I’ve always been interested in the concept of time (a bit philosophical!) and various scientific theories, like the Einstein-Bridge theory of multiple universes: how time and the universe actually works. When you think about the concept of the universe, it’s mind-blowing. I love Prof Brian Cox’s work and other astro-physicists. I write a little note about it in my ‘Afterword’ at the end of each of the novels, as well as a bit about the Anglo-Saxon context. And I do have a sneaky feeling that it could happen …

I love Pamela Hartshorne’s time-slips in Tudor York, and Christina Courtenay’s Viking time travels, and of course, the first one I read, Barbara Erskine’s Lady of Hay.

How do you incorporate your research into your novels? What is your favourite part of research? Are there any dangers of research that you’ve found along the way (e.g failing to weave it into the story in a natural way in early edits)?

I researched Anglo-Saxon language, literature and history for my first degree, and research in a number of fields has been a part of my professional life for many years. I love the fact that I can now go back to my passion for the Anglo-Saxon world with my writing. I write about everyday life in the early period, the conflicts of the transition from the (I hate to use the term) “dark ages” post-Roman Britain to the Anglo-Saxon settlement era. I’m interested in how ordinary people used to live, not in wars and battles, or kings. Although, of course, Lady Vivianne becomes the leader of a settlement, so a ‘cūning’ (‘king’) in her own right, she is more of a ‘peace-weaver’ and her interest is in the peaceful cultural and spiritual life of the settlement.

One of my favourite parts of my research is delving into the archaeological evidence of Anglo-Saxon England. It’s amazing that we are now discovering so much more about that period and the richness of life then (not so “dark” now!). Look at the Cambridge dig last year in the Anglo-Saxon burial ground which overturned a lot of our previous ideas.

I love integrating these details of daily life into my stories and because I see it all as ‘real’ as I’m writing my 6th century chapters I don’t have any feeling of having to make any effort to incorporate or insert my research into the narrative. I guess I’ve become so immersed into that world that I tend to switch from the present day to the 6th century fairly smoothly. I hope my readers feel they’re immersed into the period too.

Doing a lot of research can get unwieldy. Do you have any tips for organising your research?

I wish someone else could help me with organisation! I tend to get so immersed in my reading texts, papers, specialist forums, that I have been known to get carried away with it! I’m lucky that I already had a background in the period, but of course details are emerging and changing all the time with new archaeological discoveries.

I do the bulk of my research before I write the first draft, with that particular storyline in mind, but inevitably I need to investigate specific ‘side’ issues that arise as I write the detail of daily life. For example, I suddenly needed to find out about a specialist issue involved in dyeing and weaving fabrics at the time, which was a minor detail I hadn’t predicted, so I had to dive off to find out.

I do have general research topics in different files online and in physical boxes as appropriate (eg archaeological procedure and evidence) which I add to or change as necessary. But then I find it easier to keep specific research notes in files for each book (eg info on runes in my The Rune Stone file).

What is your writing routine? Is it rigid or flexible?

Horribly flexible at the moment! I’m used to professional working hours at the university and  when I left, I continued that pattern. I used to work basically ‘office hours’ in my study every weekday but these days since lockdown changed so much, I’m a little kinder on myself. So, if it’s a lovely sunny day I’m out for a walk or jobbing in the garden. I’m an outdoor person.

But I do try to work a session in the morning and another in the afternoon on most days, but times and hours are more flexible than before. I do try to do my yoga practice first thing in the morning before I go to my study, and have half an hour on my exercise bike after my lunch break. If I’m on a roll with my ms I just work for hours on end and forget the time.

I do still keep to a general routine of researching in the summer (when I can do my reading outside), then writing the novel in the winter, ensconced in my warm study. I don’t know what I’d do if I was contracted to write two novels in a year!

If you could travel back to one period of time, when would it be?

It would have to be the Anglo-Saxon period in England so that I could research first-hand, but I wouldn’t mind which part of that period – it stretches from the 5th to the 11th centuries, so I’ve got plenty to play with. The early part is so different from the later, and of course the Viking invasion period is something else again! It would be so fascinating to see how daily life, social distribution and expectations changed. But could I be a cūning rather than a serf, please, because the latter had quite a hard life! 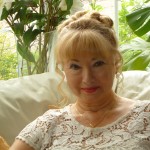 Julia Ibbotson has been talking to Julia Boggio

Julia Boggio is a writer, photographer, mother, Peloton lover, runner, and Christmas card enthusiast. She is also an original You Tube star. Her wedding dance went viral, sparking a worldwide trend in choreographed first dances. She and her husband appeared on The Oprah Winfrey Show, where she danced with Patrick Swayze, BBC Breakfast, Richard & Judy, Sky News, and many more. She has two cats who hate each other.