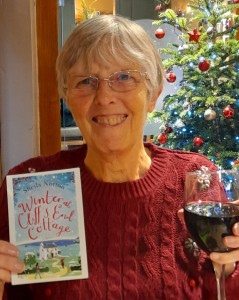 Sheila lives with her husband near Chelmsford in Essex (and part-time in Torquay, Devon). She has three daughters and six grandchildren, and spent most of her working life as a medical secretary before retiring early in 2008 to concentrate on her writing. She has been writing stories ever since she was old enough to hold a pen, and had over a hundred short stories published before finally becoming a novelist. Her first novel was published in 2003 and Winter at Cliff’s End Cottage is her twenty-third – and her personal favourite so far!

She commented, ‘To say I was overwhelmed to win this very prestigious award would be an understatement. I’m immensely grateful to the RNA, and to the readers who voted for ‘Winter at Cliff’s End Cottage’, which was the novel I’ve enjoyed writing more than any other (so far!). It’s been exactly twenty years since my first book was published, and winning this award has been my proudest moment, an achievement I never dared to hope for, and proof that we should never give up on our dreams.’

Cliff’s End Cottage is a local landmark. Perched on the South Devon coast, its garden has begun slowly toppling into the sea, yet the elderly and infamously stubborn owner Stella refuses to leave her home. When Holly, a young journalist and single mum struggling to make ends meet, decides to interview Stella about her life, at first she’s given short shrift. However, helped by a slice or two of cake and a couple of friendly cats, a tentative friendship begins to develop between the two lonely women.

Stella and Holly may live different lives, but over the cold winter nights, as Stella shares her story, the two women discover more and more in common. Time is running out for the house on the edge, but perhaps, together, Stella and Holly can find a new way forward.

As a child, my passions were reading and (especially) writing stories. Creative writing was really the only thing I excelled at, at school. I always wanted to be a writer but had no idea how to go about it, and didn’t know anyone who could advise me, so I accepted that it would always just be a hobby. Through constant practice in my spare time at writing short stories for magazines, most of which were published, I eventually gained the confidence to write a novel, and to my amazement it too was accepted for publication. Finally becoming a published novelist when I was in my fifties was, for me, an enormous personal achievement. So to be shortlisted for an award of this nature now that I’m in my seventies is even more wonderful – and really does prove the point that you’re never too old to achieve a lifelong dream.