A Wedding at Café Lompar – Jacqui and Anna Burns 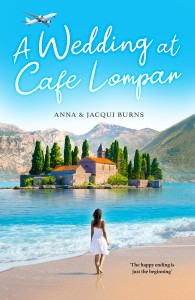 Anna: Our new release is a sequel to our first novel Love at Café Lompar, but it can be read as a standalone. We couldn’t resist returning to the quirky Lompar family set-up that we explored in our first book. It’s set in beautiful Montenegro again, and the mother-daughter relationship between Grace and Kat is tested as a rival restaurant opens next door. There’s also a wedding, which you might guess from the title, A Wedding at Café Lompar, but we don’t want to give the game away!

Jacqui: The novel was inspired by visiting Montenegro on a cruise in 2019. We were captivated by the scenery, and wanted to explore family relationships. They’re always complicated, despite the love between family members. We were also drawn by the mother and daughter relationship, and how events are perceived from the different generations. We felt after the first book that there was more of a story to be told, especially as we’d grown to love the Lompar family.

Anna: That’s an easy one as Kat and Grace were already formed from the first book. As for the new characters, we had to Google Montenegrin names for inspiration. The character names have to feel right and suit the individual personalities. We were also aware of the reader being able to pronounce some of the Montenegrin names, otherwise it can be a stumbling block. As for the setting, Montenegro is a big part of the story- it couldn’t be set anywhere else. It’s an undiscovered gem, and we’re actually going back this summer to visit. We can’t wait, although we’re a little nervous we’re going to spot all of the inaccuracies in our novels!

Jacqui: We wrote our first book with feverish speed during the first coronavirus lockdown. This time, we were busier and so naturally it took longer- a few months in total. The first edit always needs big changes. After that, it’s just a read and a polish. Our editor, Janet Thomas, sprinkles her magic over it and makes us realise how many unnecessary words we use!

Anna: We’re very different as we’re a mother and daughter writing team. We email our alternate chapters to each other back and fore. It means we get a brief respite whilst the other is writing, which is lovely and much-needed. We then read and edit each other’s chapters before writing the next one. We’re not precious about our chapters, so we always say if we don’t like something.

Jacqui: We both work full-time so the writing is done in the evenings and weekends. The time pressure means we don’t have the luxury of writer’s block. Also, we have each other to bounce ideas off.

Jacqui: The ending needed the biggest changes. We love our characters too much sometimes to let awful things happen to them, but our editor pointed that out to us. We needed to heighten the drama, which took a bit of thinking and editing.

Anna: Travel has been restricted so we had to rely on our memory of Montenegro and good old Google! It’s a great form of escapism and ‘armchair travel’. Watching Masterchef is great as a springboard for Kat’s recipes … if only I could taste them too!

Anna: There’s obviously a wedding in this book so researching wedding inspiration was particularly exciting for me as I’ve recently got engaged. I could dream about locations and dresses while classing it as ‘research’! We also had to explore some darker topics such as cancer and addiction. 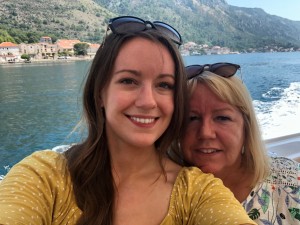 Jacqui: Since I was a child. I used to write little books in primary school and read them to my friends. Life always got in the way of writing. That’s why it’s so thrilling for me to be published at my time of life.

Anna: There was no epiphany for me as writing is in my DNA. Even though I studied Medicine, there’s this other creative side of me that I can unleash when I write. I remember I used to imagine holding our book in my hands and chatting to imaginary readers! As clichéd as it sounds, being an author really is a dream come true.

Jacqui: Lockdown provided us with more time to write, and it was a way of keeping in touch with each other as we live two hundred miles apart. I think that people who write and say they don’t want to be published are disingenuous. Although we dreamt of being published, little did we imagine it would actually happen. We sent the book to many publishers and agents, and had a glut of rejections. When we were about to give up hope, Lindsay Ahford from Honno rescued the manuscript from the slush pile. We were overjoyed! That’s when the hard work starts, of course.

Anna: Evelyn Hugo from The Seven Husbands of Evelyn Hugo by Taylor Jenkins Reid. She’s a wonderful character. I’d love to sit and listen to her stories of fame and romance. She’s a formidable, honest, and deeply complex woman.

Jacqui: Elizabeth Bennett from Pride and Prejudice. A thoroughly modern and principled woman who’s flawed like the rest of us. I’d like to ask her about her thoughts on women in the nineteenth century.

Jacqui: For both of us, Enid Blyton. I enjoyed re-reading the stories to Anna when she was younger, and she wrote great adventures for her characters.

Anna: I agree. I loved The Naughtiest Girl in School series, and the tales of midnight feasts complete with jam sandwiches and pineapple chunks.

Jacqui: We both loved Milly Johnson’s I Wish it Could be Christmas Every Day. It was about people trapped in a pub and taught a lot about appealing characters being all that’s needed to drive a story and keep the reader turning the pages.

Anna: Katie Fforde is also a master at that. I just finished A Springtime Affair and found I was hooked throughout the novel, even when she dedicated pages to describing the amazing bakes that the characters made. Such a cosy and comforting read.

Jacqui: Keep going and don’t give up. Writing a novel is a real leap of faith. You give a lot of your time to it and you don’t know if anyone will like it or even read it. It’s tough. We read inspirational quotes to keep us going.

Anna: Don’t edit as you go along, it holds you up and it’ll never get finished. You have to give yourself permission to write rubbish – the first draft is just for you. You can’t edit an empty page after all! Also, read On Writing by Stephen King. I devoured this book when I read it ten years ago, and have re-read it many times since. This truly is the writing Bible. Everything you need to know is held in the pages of this book.

Jacqui: We’re working on something new, told from the perspectives of four women. Their lives connect when a sleepy Welsh village is shaken up by a new arrival.

Anna: We’re enjoying writing it so far. It’s nice to work on something different, although we do have more ideas for the Lompar family … watch this space!

Jacqui and Anna Burns are a mother and daughter writing team. Anna, a doctor and trainee psychiatrist, and Jacqui, an English teacher, visited Montenegro in 2019 and were captivated by its beauty. Living over two-hundred miles apart, they wrote Love at Café Lompar by writing alternate chapters and emailing them to each other, keeping each other’s spirits up through lockdown and fulfilling a life-long dream. This is the first novel for both of them and they are working on a sequel, reluctant to leave the Lompar family they have grown to love.

Wedding at Café Lompar available at: