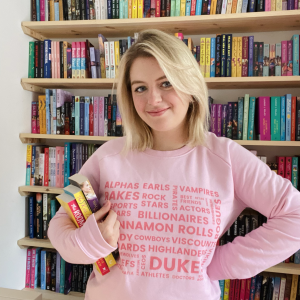 Leeds bookseller, Amy Richards, from Words & Kisses, is a finalist in the Romantic Bookseller of the Year category. The awards celebrate the hard work and talent of any person, group or organisation who has championed the broad genre of romantic fiction in a positive way.

Amy has been running Words & Kisses for three years, first from her spare room and now from a custom-built office in the garden (affectionately nicknamed The Smut Hut). After picking up her first romance back in 2015, she became a romance novel evangelist and set up Words & Kisses to spread the love for her new favourite genre. Words & Kissesis the UK’s only romance-exclusive bookshop and subscription service, stocking a diverse range of curated traditionally published and indie picks.

She commented, ‘I’m honestly overjoyed to have been nominated for this award. Running Words & Kisses has been an absolute labour of love, in more than one way, over the past few years but getting to put books into people’s hands that make them smile, improve their day or even become their new favourite is genuinely such a joy.’