Lynn Johnson – The Potteries Girls on the Home Front 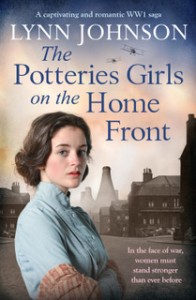 We are delighted that you could join us to talk about your new release. Could you tell us a little more about it?
Thank you for inviting me along to sit in the hot seat! My new release is the third in my Potteries Girls series – The Potteries Girls on the Home Front. In this book the reader learns much more about Betty – a character we met in the second book, Wartime with the Tram Girls. In that book, Betty leaves the Potteries suddenly, but we don’t know why. In Home Front, Betty’s story gradually unfolds, and we begin to understand what she is looking for in her life and about the big secret she had kept from her tram girl friends. Readers will identify old friends who pop up in each of the books. However, each book can be read as a standalone. Of course, I would say read the whole series – but then I would, wouldn’t I!

How did you decide on the names for your characters and the setting for your book?
I met Betty as a tram girl in book 2 and she impressed me greatly. I felt there was more to her than I had realised and when something like that happens – you have to listen. I had to put her at the centre of book 3. She’s a likeable character but a strong one who knows her mind but is thwarted in her ambitions. Nevertheless, she is a good friend and will help anyone in need. I like to interview my characters and get them to tell me a little about themselves. In doing that, I can get to know them well and their names seem to jump out at me. For example, in my current WiP, a very minor character whose name didn’t matter at first, suddenly turned into a major character and I knew the original name would not work, so she had a name change. I knew without a doubt that the name did not match the character she had become.

How long did the book take to write? How much re-writing do you normally do?
I allow a year from start to publication. This means roughly 8 months prior to handing it over to my editor. As I write historical fiction/Sagas I have lots of research to fit in and develop so I have to be careful I don’t get bogged down. It’s so easy when you are researching something you find fascinating to keep dipping in. It’s important to have an outline of your novel so you know where to concentrate your efforts. I write in a linear way mainly so I am where the character is, sequentially, but it’s not always possible. Sometimes the only way forward for your character(s) is to write first and re-write later. I might, at some point, move chapters out of linear time because I want a certain effect. In book 1, The Girl in the Workhouse, I wanted to start the story prior to Ginnie entering the workhouse, but I needed the reader to have that terrible building looming over the family from the very start. Eventually, Ginnie’s first night in the children’s hostel became the prologue to the novel written in the first person.

What is your writing day like?
If I’m writing the first draft my writing day usually starts with me reading a book in bed that is not of the genre in which I write. I like to keep the two separate. Once I’m at the editing stage I allow myself to read my own genre and I love it. I have an office at the back of the house, and I go there around 9.30 – 10am and write for a couple of hours, stop for lunch and then return for another three hours. If I have admin or research reading, I will often do that in the evening.

What was your journey to publication?
I love reading and I enjoy writing, but it was never my ambition to become a novelist. After completing writing up my family tree to give to the family, I wanted to tell a story based on my Grandma’s past. Starting off life as a short story, it eventually became my debut novel. By this time, I had taken early retirement and it was a perfect time to set new goals – one of which was to write the novel and try to get it published. I went on courses to learn how I might tell the story better and I joined the RNA and went to the Conference. In 2019 I set myself some goals, one of which was to get my finished novel through the NWS and try to get an agent to publish it. I got a good report back but needed to make some changes – which I did. I booked three 1-2-1’s at the Conference, one of which was with the lovely Keshini Naidoo of Hera Books. She asked to see the full ms, loved it and offered me a two- book deal. I signed the contract in 2019.

What advice would you give to aspiring authors?
I came to be an author very late in life so I would say that if you want to write, never think you are too old. An author that particularly inspired me to write was Sybil Marshall who had her first book published at the age of 82 and more followed, so I felt I had plenty of time! If you get the opportunity, do some courses – I don’t mean a degree necessarily – I mean courses to develop certain skills as a writer to help you to ‘find your voice.’ In other words, discover what you want to write about and how you want to write it. Join the RNA and you will get access to others like you who feel that writing is a natural thing to do. I would also say set yourself a timetable and work to it, otherwise you will procrastinate – I guarantee it. Having got the tools of your trade together – then go for it. Tell yourself you are going to write, be it a book, short story, poetry or what, and just go for it. Remember – every journey starts with a single step.

Can you tell us what you are working on now?
I am currently working on the fourth and last of my Potteries Girls series set in the Staffordshire Potteries during and around WW1. Each of the books revolves around one character but all of the stories are interconnected. So, in Book 4 (title not finalised yet) we will be meeting characters from previous novels where we find out more about them before and after they got to know one another. Book 4 tells Martha’s story. She’s a friend of Betty’s, the protagonist from Book 3 who was one of the Tram Girls in Book 2! All of girls are affected in some way by the Great War and may see things in a different light because of their different experiences of life. Each book can be read as a standalone, but they are best read in order to get the most out of them. 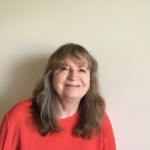 Lynn Johnson was in her sixties when her first book was published. A graduate of the RNA New Writers’ Scheme, she was taken on by Hera Books for a two-book contract which was quickly followed by another two-book contract to complete her Potteries Girls series. Her latest book, The Potteries Girls on the Home Front was published 11 August 2022. The last book in the series will be published in August 2023. Lynn, a native of the Staffordshire Potteries now lives in Orkney with her husband and a quantity of cats.