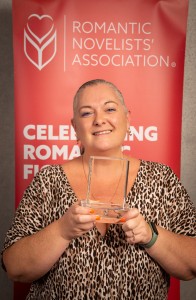 Sara-Jade Virtue, Brand Development Director, Fiction, at Simon & Schuster UK, has won the Publisher and/or Editor of the Year award for the Romantic Novelists’ Association’s (RNA) annual Industry Awards for 2022. The awards celebrate the hard work and talent of any person, group or organisation who has championed the broad genre of romantic fiction in a positive way.

Sara-Jade joined the business in 2007 and spent twelve years as Special Sales Director in the Sales team before moving to Editorial in November 2019. She is the Brand Director for the Simon & Schuster (S&S) women’s fiction community Books and the City, which launched on Valentine’s Day 2011, and works across the commercial women’s fiction list, identifying new talent and developing growth strategies for authors. She also manages the #DigitalOriginals publishing programme and #OneDay open submission project, leads the Jackie Collins reissue programme, runs the #LibraryLink project, and leads a #RespectRomFic movement, aiming to increase the profile of romantic novelists in the UK.

She commented, ‘I’m so grateful to everyone at the event or sitting at home in their rocking chairs who nominated and voted, the RNA themselves – I salute each and every one of you, the authors who write the love stories I love, and the millions of readers who champion the romance genre. For far too long, the contribution of Romance – however loosely or literally we describe it – to the literary landscape has been at best ignored, at worst dismissed, but winning this award will hopefully enable me to spend every minute of every day plotting, scheming, conspiring and demanding we rise like a Phoenix to #RespectRomFic.’

Sue Moorcroft, Head Judge for the RNA Industry Awards, also congratulated Sara-Jade. ‘With such a wonderful set of shortlists it was always certain that the judges of this year’s Industry Awards would return an outstanding list of winners. Choosing between excellent candidates was an exacting task and I enjoyed being a part of the stimulating discussion around each and every nomination. My thanks to my fellow judges for the hard work and detailed research that went into the selection process, and to Laura James and Melanie Griffiths from the RNA for their efficient organisation. They made my job easy. Most of all – congratulations to the winners of these wonderful awards!’