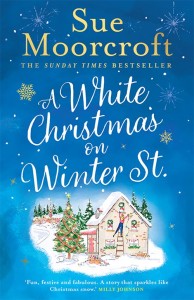 We are delighted that you could join us to talk about your new release. Could you tell us a little more about it? What was the inspiration behind your book? What prompted you to tell this story? Thank you for inviting me! A White Christmas on Winter Street is set in ‘my’ village of Middledip, which exists in some of my earlier books. A couple of years ago in Christmas Wishes I created a retired foster carer, Nan Heather, and wanted to bring one of the children she fostered back to the village to see how life had treated her. In the end, I chose two, because they’d remained close – Sky Terran and her foster brother Freddy Walker. I began the book at the point where their friendship and working partnership exploded, driving Sky to seek a new life in Middledip, where she’d spent the happiest part of her childhood.

Making Sky buy a neglected house that had captured my imagination on TV brings her into conflict with villager Daz Moran, who wants The Corner House for his own fresh start. Winter Street enters a street-decorating competition, which springs from a place close to my home that the local paper has dubbed ‘Christmas Street’ because of the residents’ pride in their all-out Christmas bling. Involving Sky in the Christmas Street Competition catapults her into the Winter Street community.

No story works well without a supporting cast and one of Daz’s conflicts involves a friend who has perpetrated a fraud. I and an old banking colleague had a lot of fun creating that! The fraudster’s wife Courtney and his son Wilf, along with fellow Winter Street resident Marietta, are very much part of the story. I could not ask for better characters for Sky to make friends with than Courtney, funny and heart-breaking Wilf, and amazing cookie maker Marietta. That they’re already Daz’s friends is a complicating factor. With all this material, it was easy to let Sky and Daz tell me their story.

How did you decide on the names for your characters and the setting for your book? I wanted Sky to love nature and giving her a name to go with that is one of the few things Sky’s mum ever did for her. Inspired by a friend choosing her own surname when her life changed, I had Sky do the same, so she abandoned her birth name of Murray and chose Terran, which means ‘of the Earth’.

Daz, I’m afraid, was trickier. I saw the name ‘Daz’ as a shortened version of a Russian name and gave him Russian ancestry. But then the war between Russia and the Ukraine began. Briefly, he was Belarusian, but that idea proved equally as problematic. By then he was Daz in my mind, and I didn’t want to rename him. When a member of the Avon HarperCollins team said she had a friend called Daz whose full name was Darragh, that’s what he became. I usually just call him Daz, but his mum calls him Darragh.

The setting was easy, as readers and reviewers greet news of new Middledip books with enthusiasm, knowing that every story is a standalone so they don’t have to have read any of the others. There’s also a map on my website for those who like to visualise the layout of the streets of cottages, the Three Fishes pub and the Angel Community Café, the village hall and shop. You can even click on the markers and see who lives where.

When did you realise you wanted to be an author? I was slow-ish coming to literacy owing to interrupted education, but once I’d found the world of fiction and understood that someone created what went between the covers, I wanted to be that person. I think I was six or seven years old. I began to show promise as a writer myself, though I also got ‘dirty and untidy!’ scrawled on my exercise books as my handwriting skill has never kept pace with my storytelling. I also got in trouble for daydreaming and telling extravagant lies, both of which eventually proved perfect for a career as an author.

Who were your favourite childhood authors? Enid Blyton, Monica Dickens and Monica Edwards. I mention Enid Blyton first, as my early favourites were Noddy and Brer Rabbit. I used to demand so many bedtime stories that Mum eventually invested in a tape recorder and recorded a tape full, just reading me one or two each evening, then setting the recorder going until I fell asleep. I believe this means that my mum invented both audiobooks and book piracy. 

The two Monicas came a little later. I especially enjoyed their books because they used to have some of their teenaged characters romantically involved. What makes people fall in love has always fascinated me.

I once wrote to Monica Edwards about one of her books and lay awake at nights hoping she’d answer. At length, I received a brief, disappointingly impersonal acknowledgement from her publishers. In contrast, I consider it a privilege that readers can message me via my website or social media, and I can reply.

I also discovered a lifelong favourite, Nevil Shute, when I was nine. His A Town Like Alice was the first book that taught me how epic a love story could be, and what people will sacrifice for love. Nevil Shute wasn’t a children’s author, but once I’d learned to read, my reading age bounded ahead of my actual age. Dad used to vet the books I chose from his and Mum’s collection. ‘Lolita? No, not that one, darling…’

Never give up. It took me twenty years of constant work to get from selling my first short story to a national magazine to making my living as a novelist.
Educate yourself. That doesn’t mean necessarily taking a creative writing degree (I don’t have anything better than an A Level equivalency in English myself), but taking courses or classes, reading writing guides, going to conferences and talks. I would also say read current books in your chosen genre.
Learn about publishing as well as writing. Writing a book is a creative act but selling it is all business. Technology makes it possible for you to study the websites of agents and publishers, to follow them on social media to learn what they’re looking for and what opportunities exist. There are also free email newsletters from literacy officers and arts councils, even publishing industry magazines such as The Bookseller, which will provide you with valuable insight into the publishing world.

Can you tell us what you are working on now? An Italian Island Summer is set in Sicily and scheduled for publication on 11th May 2023. It tells the story of Ursula Quinn, an Irishwoman who’s spent her adult life in Brighton, firstly as an art student and then as a tattoo artist. Changing direction after a disastrous end to her marriage, she plans to go to Italy to study painting on ceramics. Her uncle helps her find a situation on the Italian island of Sicily, working mornings at a small hotel in exchange for room and board, so she can attend the ceramics studio in the afternoons. She joins the Tringali family at Residenza dei Tringali and is allocated a tiny attic room with a balcony. At last, she finds peace, and space to put the previous turbulent years behind her.

A promising start to this includes a burgeoning relationship with Alfio Tringali, who returns to the hotel to help his mum and sister as they struggle with ill-health and broken relationships. However, Ursula’s parents’ rocky relationship turns out to have much deeper roots in the past and in Sicily than she could ever have imagined, and she’s hurt and bewildered that everyone seems to know the truth before her. Including Alfio.

I spent a wonderful week in Sicily researching An Italian Island Summer, and so was able to drop Ursula into a gorgeous setting in Oritigia, the old city of Siracusa on the east coast. Ortigia is connected to the rest of Sicily by bridges, so is an island off an island. It’s very beautiful, and I can recommend a visit to admire not just the Baroque buildings and the fort, but the billionaire’s yachts in the marina, the gorgeous pink oleander bushes and narrow streets. And the food’s fantastic. 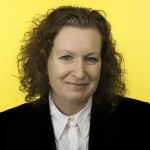 Sue Moorcroft is a Sunday Times bestselling author, #1 on Kindle UK and Top 100 on Kindle US and Canada and writes two books a year for publishing giant HarperCollins. She’s won the Goldsboro Books Contemporary Novel of the Year, Readers’ Best Romantic Novel award and the Katie Fforde Bursary.

Her novels, short stories, serials, columns, writing ‘how to’ and courses have appeared around the world.