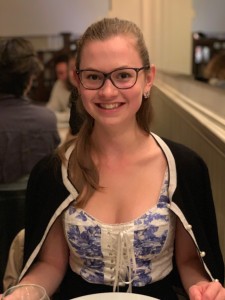 Literary agent Hannah Schofield has won the Agent of the Year award for the Romantic Novelists’ Association’s (RNA) annual Industry Awards for 2022. The awards celebrate the hard work and talent of any person, group or organisation who has championed the broad genre of romantic fiction in a positive way.

Hannah is a literary agent at LBA building a list of commercial and book club fiction, with some non-fiction and YA. But if all her clients turned round tomorrow and said they wanted to write romance, she wouldn’t be mad about it! Hannah loves to have fun while reading and is drawn to love stories in all their guises. She is thrilled to have been shortlisted for the RNA Agent of the Year 2022.

She commented, ‘To even be on the shortlist for the RNA Agent of the Year award, among such esteemed company and less than three years after brokering my first book deal, was incredible – and I am so very honoured that the RNA chose me as the winner in 2022. This is absolutely a career highlight! Thank you so much to the whole RNA, and to my authors and colleagues, for their support. I will continue to champion romantic fiction fiercely with the award in hand!’

Sue Moorcroft, Head Judge for the RNA Industry Awards, also congratulated Hannah. ‘With such a wonderful set of shortlists it was always certain that the judges of this year’s Industry Awards would return an outstanding list of winners. Choosing between excellent candidates was an exacting task and I enjoyed being a part of the stimulating discussion around each and every nomination. My thanks to my fellow judges for the hard work and detailed research that went into the selection process, and to Laura James and Melanie Griffiths from the RNA for their efficient organisation. They made my job easy. Most of all – congratulations to the winners of these wonderful awards!’