Back
Thank you Kindly

We’ve lined up a series of Romance Now Instagram Live interviews during Romance Reading Month 2022, to tie-in with the different themes each week. If you are not able to join live, don’t worry, as the interviews will be saved on the grid to watch whenever you like. During the month, Fiona Mountain will be chatting to: 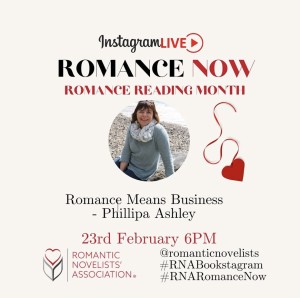 Sunday Times bestselling author of women’s fiction and romance, Philippa Ashley, passionately believes that Romance Means Business. Philippa’s first novel, Decent Exposure won the Romantic Novelists Association New Writers Award and in 2009, it was filmed as a US TV movie called 12 Men of Christmas starring Kristin Chenoweth and Josh Hopkins. Miranda’s Mount (or Return To Castle Bay) won Best Ebook at the Festival of Romance Reader Awards 2012 and It Happened One Night (or The Little Deli By The Lake) was shortlisted in 2013. As Pippa Croft, Phillipa also writes as the Oxford Blue series which is published by Penguin. She lives in a Staffordshire village with her husband and has a grown-up daughter.She love wild places, lakes, Cornwall & Poldark.