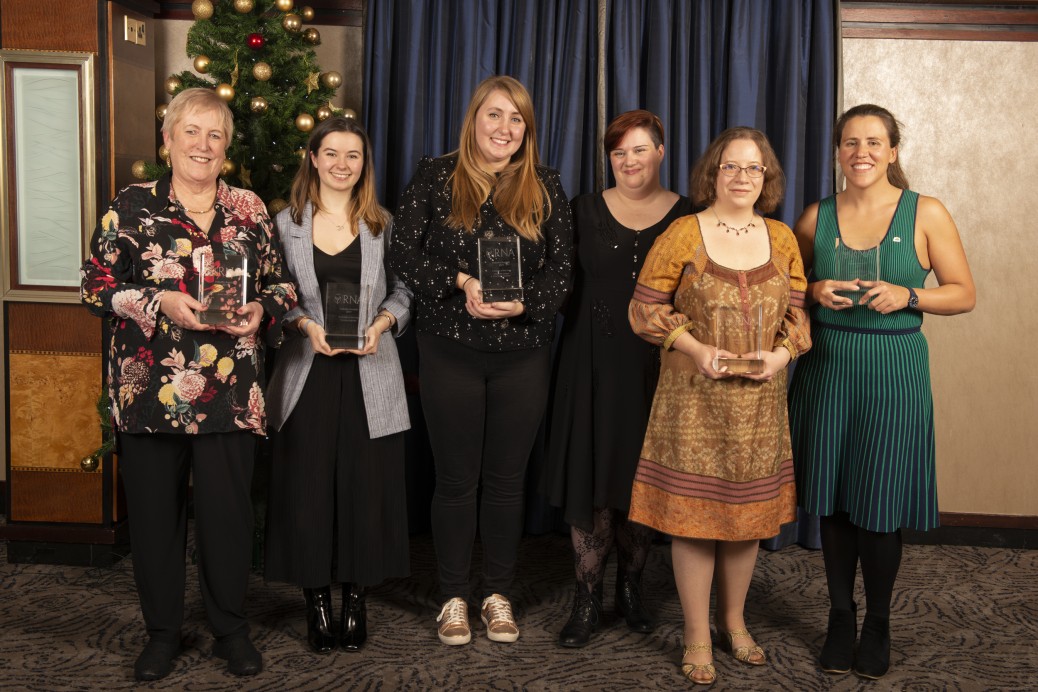 We are delighted to announce the winners of the annual Industry Awards. The RNA Industry Awards are decided based on nominations from RNA members. They recognise and celebrate the many professionals whose work supports and promotes the genre of romantic fiction.

The awards were presented during the RNA’s Winter Party, held at the Leonardo Royal Hotel in London, in recognition of 2019’s best library, bookseller, media star, agent, and publisher. We are also delighted to announce the winner of  the newly created Inclusion Award.

This award, new in 2019, recognises the individual or organisation that has championed inclusivity in romantic authorship and publishing. Winner Laura Macdougall has worked in publishing for almost ten years, first as an editor and now as an agent at United Agents. Laura has built a wide-ranging, eclectic list of both fiction and non-fiction, reflecting her own tastes as a reader. The majority of her list is made up of LGBTQ writers and Laura is always keen to champion under-represented voices and stories.

This award recognises the important work that libraries and librarians do in supporting the romantic fiction genre, and the Association in particular.  The winner was Redditch Library in Worcestershire, for being committed to supporting and promoting romantic fiction through library events, reviews, and publicity. Redditch library is located in the heart of the town centre, and delivers a wide range of services for the whole community, including adult learning classes, job clubs and job fairs, Digital Champions offering support to get online and social connecting groups.

This award recognises booksellers promoting and championing romantic fiction in a positive and proactive way throughout the year.  Rebecca McDonnell accepted the award on behalf of Goldsboro Books in London.  Book collectors and friends David Headley and Daniel Gedeon started Goldsboro Books in 1999 with plans to sell exclusively online. Fast forward 20 years and the business, which is now located at 23-27 Cecil Court, has seven employees, is in proud possession of the world’s largest signed First Edition Book of the Month Club, and boasts a turnover of £1.1m.

This award recognises journalists, bloggers, publicists, TV or radio presenters who have helped raise the profile of romance writing and/or the RNA in a positive way. Winner Anne Williams, book blogger and reviewer at Being Anne (http://beinganne.com) is based in Wetherby in Yorkshire. Her blog has won the Best Pal award at the Annual Bloggers’ Bash for three years running.

For the literary agent who has striven to support, mentor, nurture and promote their authors’ careers, the genre in general and the RNA in particular. This year’s winner, Kate Nash, founded Kate Nash Literary Agency in 2009, which has gone on to become one of the UK’s foremost independent literary agencies, specialising in bestselling commercial fiction and non-fiction for adults, young adults and children. She enjoys championing romantic fiction and works with authors who can make her fall in love with their characters.

For the publisher who embraces the genre, mentors writers to produce their best work, and is innovative, creative and visionary in the marketing and promotion of Romantic Fiction on every level.  This year’s award was accepted by Charlotte Ledger, Editorial Director at HarperCollins UK. She acquires for the Harper Fiction list and heads up the brand new digital-first division, One More Chapter, publishing an exciting list of bestsellers such as Glynis Peters and Zara Stoneley.

Charlotte works on authors across commercial fiction including Irish Times and Kindle bestseller Carmel Harrington, Debbie Johnson, who has now sold over a million copies of her books, and the Kindle #1 and USA Today bestseller Sue Fortin.

The awards were presented at the RNA’s Winter Party at the Leonardo Royal Hotel in London on 21st November 2019.