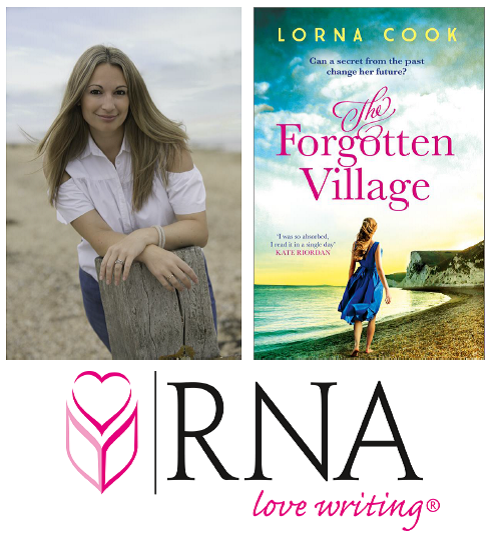 Lorna Cook has won the RNA’s Joan Hessayon Award for new writers with her debut novel The Forgotten Village, published by Avon. Lorna was presented with her award and a cheque for £1,000 at the RNA’s York Afternoon Tea today.

The judges for the award, which included RNA Chair Alison May, Vice Chair Imogen Howson, Amy Durant from Sapere Books and Sara-Jade Virtue from Simon & Schuster, were unanimous in their decision to crown The Forgotten Village the winner, and praised the novel’s sense of history and romance.

The Forgotten Village is set in 1943. The world is at war, and the villagers of Tyneham are being asked to make one more sacrifice: to give their homes over to the British army. But on the eve of their departure, a terrible act will cause three of them to disappear forever.

Lorna was inspired to write her novel when she found an article about the abandoned Dorset village of Tyneham in a national newspaper. It was requisitioned in its entirety and never handed back. Taken by the army in 1943 to use for D-Day training, today it is still owned by the MOD and remains unlived in and crumbling. What happened to those who lived there? Where did they go? When Lorna researched the village, she became hooked on its history and the area around it.

RNA Chair, Alison May, commented, ‘The Forgotten Village is an engaging, moving and ultimately life-affirming story that casts light on a fascinating moment in history.’

Sara-Jade Virtue, from Simon & Schuster, said ‘Rich in mystery and passion, The Forgotten Village had me gripped from the first page, and didn’t let me go till the final conclusion. I was completely swept away by the heartache of Veronica’s story, and rooting for Melissa all the way through. Brilliantly researched, excellently executed, I absolutely loved it!’

The book was selected from a list of fifteen contenders, all authors whose debut novels have been accepted for publication after passing through the Romantic Novelists’ Association New Writers’ Scheme. You can see the full list of contenders here, and read more about all the books on our blog. This year’s competing novels include epic historical romances, contemporary suspense stories and uplifting romantic comedies, and explore themes including the atrocities of war, living with mental illness and women’s suffrage.

The Joan Hessayon Award is generously sponsored by Dr David Hessayon in memory of his wife, Joan, a novelist, RNA member and passionate supporter of the New Writers’ Scheme.