In honour of the RNA’s 60th Anniversary we’re interviewing some of the many volunteers who work hard behind the scenes to keep the organisation, website and blog running smoothly. Today, Celia Anderson, who organises the Romantic Novel Awards, has dropped by to tell us about her role. 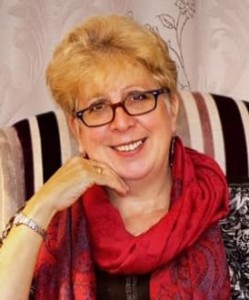 Thank you so much for the invitation to be on the blog today. It’s great to have the chance to bring everyone up to speed with where we are awards-wise and how the system operates.

When I took over the organising of the Romantic Novel Awards, it had been in various pair of very safe hands over the years, but had recently had a revamp by Nicola Cornick’s very clever husband Andrew so that, blissfully, all the paperwork is now done online. This means that the judges who read for us can be contacted by email at the touch of a button to be allocated their books and can get in touch with any concerns very easily. We have a wide range of enthusiastic readers/romance-lovers on board. The list is growing all the time which means each entry can have a larger number of reads to make the process fairer.

The whole process starts around this time of year when I contact judges to see if they are still available to read for us and remind them of the guidelines, social media and other confidentiality issues, category judging tips and so on. In the meantime, the online system is updated for the next year’s entries and I let publishers know what date we’ll be open for business. We have lift off.

This is the first year I won’t need to empty numerous cupboards and shelves to store print copies while they wait to go out. We had already decided to move forward by only accepting ebook (PDF) entries from now on to save on huge amounts of postage and the hours awards organisers have traditionally spent packing, labelling and taking books to the Post Office, which is fortunate, because we wouldn’t have been able to do that with safety in this current climate. Luckily, everything else can go on as usual even in lockdown, which I’m sure is a welcome piece of normality for all of us.

The allocation of ebooks to judges carries on from the opening date to close of play at the end of September. Each judge initially gets three books via email and the judging period is four weeks, after which they input their scores. Some of our tried and tested readers come back for extra books again and again. They are always very appreciative of the chance to be part of such an important part of the RNA’s year, and they eagerly await the short-lists coming out to see if any of ‘their’ books have been picked.

Each category now has its own winner, and the Awards ceremony in March goes from strength to strength. This year’s sparkling event at the Royal Leonardo Hotel at Tower Hill was brilliantly hosted, as ever, by our very own Jane Wenham-Jones, with guest presenter Jenny Éclair. When Milly Johnson gave her moving speech on collecting her Outstanding Achievement Award, there was barely a dry eye in the house.

This will be the last year I will be the Romantic Novel of the Year Organiser, so we are looking for someone to take over this fascinating role. I have to say it’s been a wonderful, confidence-building opportunity for me to see how the publishing industry ticks, to make useful contacts and to gain a whole lot of new friends. If you think this could be something you would like to do, I’ll be available to guide the new organiser through every step of the process beforehand and will be on hand next year for advice at any time. Please feel free to get touch if you’d like more.