Janice Preston: An Innocent on Facebook Live – with Tessa Dare 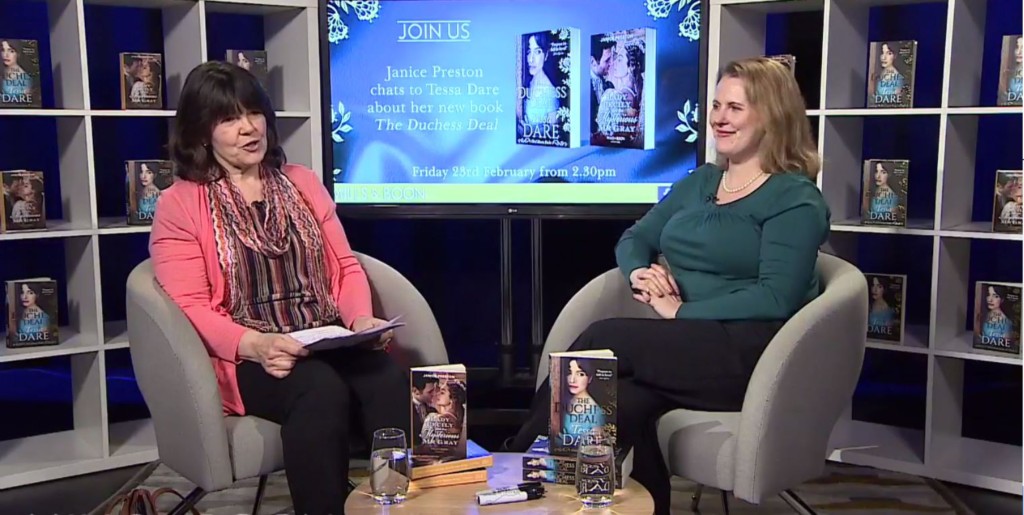 When I signed my first publishing contract in November 2013 I made a pact with myself. I decided I would never say ‘no’. Like many writers I am, at heart, a bit shy: happy to be on my own, work on my own and to disappear for long periods of time into my imagination so I knew I needed to push myself. So, since then, whenever someone has asked me ‘Will you be interviewed on radio or give a talk at our library/bookclub/WI or appear at our literary festival?’ although my instinctive response has always been to say ‘Oh no, I couldn’t possibly’, my actual reply has always been ‘yes’ (after a good internal talking to, when I remind myself of that pact). And, incidentally, never once have I regretted saying yes!

And so, when Nicola Cornick emailed me one day to ask if I was interested in interviewing Tessa Dare, the successful American Regency author (and I mean New York Times and USA Today bestselling, RITA-winning sort of successful), live on Facebook in a joint promotional venture between Mills & Boon and the RNA, I of course said ‘yes’ even though the craven coward that dwells in my stomach was screaming ‘What the b****y hell do you know about interviewing?’ Or about Tessa Dare, come to that (apart from the one book I’d read about 3 years before). Or about Facebook Live – apart from my first ever attempt with Sarah Snowdon in Laura James’s excellent workshop at last year’s conference and a couple of wine-fuelled forays last autumn at our annual Mills & Boon author get-together – one solo effort and the other with my pals from the Unlaced Book Club Facebook group.

Anyhoo – I said yes.
I was committed.
February 23rd was ages away.
I had time to prepare.
Everything would be fine… 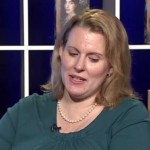 So I read a couple more of Tessa Dare’s books (including the new release she was over here to promote); I asked Mills & Boon for a list of questions and I tweaked and adapted them – and wrote a few linking sections where I could sneak in a mention of the RNA and the NWS and also a little about my own work; I booked my train; and I decided what I would wear.

And I visualised what would happen, how I would feel (confident and in control) and the smooth process of the entire event.

I was in contact with M&B’s press officer, Joe, who with his colleague Alexia was organising the event. I was asked to arrive at 1.45pm so we had time to go through the process in the studio before going live at 2.30pm and to allow Tessa and I time to meet beforehand. Unfortunately, Joe would not be there on the day but his colleague Isabel would meet me.

Here is my vision.

There would be a quiet room with a webcam set up, aimed at a couple of chairs. There would be a screen with the comments scrolling down so we could see who was joining us, and say Hi, and there would be a couple of M&B bods in the background making sure everything went smoothly. Oh, and a clock on the wall so I could keep an eye on my timings.

I should have been alerted by the word studio. This is the News building, after all.

Firstly, everything ran late. Not me, I hasten to add… I arrived ten minutes early. But it was when I finally got my first glimpse of the studio that I realised my visualisation techniques needed work. Unfortunately, I constantly forget to take photos when I’m out and about and, sure enough, I failed to take one of the actual cameras. I really wish I had!

There were two chairs with a low round table set in front of them, together with 3 copies of Tessa’s The Duchess Deal and 3 copies of my May release, Lady Cecily and the Mysterious Mr Gray. There were open shelves set behind the chairs with further copies of the book.

‘Oh, you managed to get copies of my book from the warehouse, then,’ I said to one of the girls as we walked in.
‘Not really,’ she replied. ‘They would only send the three for the giveaway. The others are my handiwork.’
I looked more closely and, sure enough, the books at the back were an entirely different book jacketed in a photocopy of my cover! I was grateful they’d made the effort.

So far so good. 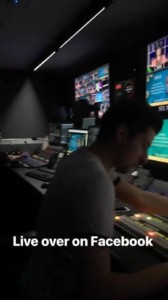 But then I saw what was facing those chairs. Oh, my! Three cameras. And not namby-pamby hand held video cameras either, but serious, don’t-mess-with-us type cameras! And spotlights. And technicians, who proceeded to fit me up with a mic AND an earpiece. Here’s a tip – if ever you’re told you’ll be in a studio, wear something with pockets. I had none, so the boxes connected to said mic and earpiece were clipped onto my waistband. Perhaps it was a blessing I hadn’t eaten much lunch because of my nerves.

Then they took me to the control room with its wall of monitors and bank of controls. It was so far removed from what I had expected I began to feel like this was happening to someone else.

We were so late by now, I’d given up worrying that we’d not started on time. It was out of my hands. Tessa seemed very nice and chatty and I discovered that she hadn’t been able to open the zip folder Mills & Boon had sent her with their questions, so I didn’t have to mention I’d tweaked the questions and changed their order.

We sat side by side and stared down the barrels of those huge-lensed cameras while everyone else disappeared into the control room. My notes were on my lap, together with an iPad they handed me – this was for feeding the selected viewers’ questions through to me. My hands were shaking and my mouth was dry but there was no backing out now.

‘Ok. We’re ready,’ said a voice in my ear.
‘They’re ready,’ I said to Tessa. She nodded and smiled. And we waited. And then I thought Oh… heck (or words to that effect).

‘You are going to count me in, aren’t you?’ I muttered into the mic, having had a sudden vision of us gazing gormlessly into the cameras as they beamed us live onto Facebook.
‘Yes, of course.’
Phew!
10…9…8…7… you know the rest. I took a deep breath. Looked at one camera, switched to the other, back again to the first (totally forgetting their earlier instructions). And I started to speak.

I was lucky. Tessa knew her stuff, and was very happy to chat away about her new book, the characters, her inspiration and her writing process. I asked the first couple of questions I’d prepared, and then the first of the viewers’ questions came through on the iPad and there were plenty enough to keep us going. I lost track of time completely. There was no clock on the wall, and I completely forgot I could have checked the time on the iPad. Perhaps it’s just as well because I had no idea what time we’d actually started and I’d only have confused myself (not too hard to do!) My earpiece kept falling out of my ear without me realising, and I remember worrying whether I’d missed them saying something vital, such as ‘Time’s up’!

But I didn’t, and when the message appeared on the iPad, saying it was near the end, I switched back to my prepared ending, announced the winners of the 3 sets of signed books up for grabs, and thanked Tessa before saying goodbye to the viewers and breathing a huge sigh of relief.

Ultimately, it was an experience I wouldn’t have missed – I even enjoyed it as I relaxed into my role as interviewer. There are a few things I would have done or said differently if I had my time over again (I mainly regret not mentioning that neither Tessa nor I could see who was joining the session and therefore couldn’t say hello) but I certainly don’t regret the time I spent tweaking and learning all those questions I didn’t use in the end. Like the saying goes – fail to prepare, prepare to fail. The interview might not have been perfect but, having now viewed it back, I think it went okay.

And would I do it again? You bet I would! 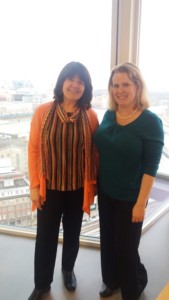 Thanks so much to Janice Preston for writing up her interview with Tessa Dare for the blog, and giving us all the inside story! And in case you missed Janice’s wonderful interview with Tessa, you can watch it again here on the Harper Collins Facebook page. Thank you also to Mills & Boon for collaborating with the RNA on this special interview. 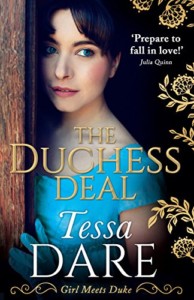 ‘I am a Duke. I’m not asking you to marry me. I am offering to marry you. It’s a different thing entirely.’

When the Duke of Ashbury returns from war scarred, he realises he needs an heir – which means he needs a wife! When Emma Gladstone, a vicar’s daughter turned seamstress visits wearing a wedding dress, he decides on the spot that she’ll do.

His terms are simple:
– They will be husband and wife by night only.
– No lights, no kissing.
– No questions about his battle scars.
– Last, and most importantly… Once she’s pregnant with his heir, they need never share a bed again.

But Emma is no pushover. She has secrets and some rules of her own:
– Theywill have dinner together every evening.
– With conversation.
– And teasing.
– Last, and most importantly… Once she’s seen the man beneath the scars, he can’t stop her from falling in love… 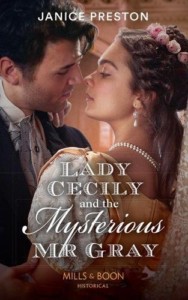 Love or family…
How can she choose between them?

Lady Cecily Beauchamp has always put her family first. Until she falls under the spell of the mysterious Zachary Gray—a man of Romany descent. Knowing her family will forbid their match, Cecily steels herself to do her duty and marry elsewhere. Only she finds herself irresistibly drawn to Zach as the spark between them ignites a passion neither can deny!