Today we welcome Kate Thompson to the blog. Kate’s fourth novel, The Allotment Girls was released last week with Pan Macmillan. Not only did Kate become a Sunday Times Best Selling Author in 2015 with her debut novel, Secrets of the Singer Girls, she is also an Award Winning Journalist, having worked for the Daily Mail and Daily Express. With such a successful and experienced author on the blog this week, I wanted her to tell us her tips for publishing success.

Thanks for having me on your blog, what a privilege! I still feel like a newbie, particularly in the genre in which I write – saga – with prolific authors like Annie Murray and Margaret Dickinson. Margaret published her 25th novel this year, so when I look at remarkable writers like that, I realise I still have a long way to go before I can call myself experienced, which leads onto my first tip.

Being part of a community of writers is a vital tool to learning. I look at the careers of writers I admire to try and understand the key to their longevity. Read blogs and interviews with writers you like, note down their tips, connect with them on Twitter and Facebook, look at the way they interact with their readers on social media.

Whatever era or setting you choose to place your characters in, devour all the sources of information you can find, whether it’s books, films, plays, first-hand testimonies, archives, newspapers of the time or oral recordings (wonderful to hear the nuance of language). It doesn’t matter if only two lines of research from a morning spent in an archive make the final cut, it still informs your overall knowledge, and I often find research is a great catalyst for inventing characters.

For at least the first half of the book, my characters are strangers to me, it’s like making awkward small talk at a party. After speaking with many other writers (see point one) I have discovered that for many, this is entirely normal, so stick with it. Eventually the magic and flow will come and until it does, persist. Another writer friend visualises painting bum glue on his posterior to get him stuck to his seat! Lots of writers swear by Pacemaker, an app which keeps you on track. I set myself targets by chapter, i.e. a fortnight per chapter. When the flow kicks in and your characters come alive, this is a glorious moment. Then I often find my characters take on a life of their own and do things that are unexpected to me, which leads me to my next point.

Some writers prefer a rigid structure, and they like to know what is going to happen before they start. Others just have a rough outline. I’m somewhere in between. I start out with a timeline, a cast of characters and a feeling for the narrative arc, but I think it’s important to have the flexibility to be able to change course, bring in new characters, downplay others or simply delete vast swathes if it’s not working. Writing means working within a disciplined structure in order to achieve your deadline, but allowing the organic and fluid nature of creativity to flow.

I keep a word library on my computer, of words which I love, which interest and intrigue me, or old-fashioned phrases or things I’ve overheard at the bus stop. It all goes into my word library for future use.

Before I start a new book, I compile a mood board on a big cork board next to my desk. For instance, my new book set in Bryant & May match factory in Bow, so I had a 1939 street map of Bow, photos of the match girls spilling out the factory at the end of their shift, photos of old match boxes… Anything that inspires me gets pinned on it. It’s a great way to visualise your book’s setting, especially when you’re not feeling particularly inspired.

Jilly Cooper said recently on Desert Island Discs that she employs all the senses when writing. If you’re struggling with a scene, try to weave in the smell, or taste, the sound and the touch of something to really help bring the scene alive. Sarah Waters is a wonderfully visceral writer whose use of employing all the senses means she has her readers walking right with her down a stinking cobbled back alley in 19th century London.

8 – Be aware of your shortcomings.

Mine is a tendency to be over-descriptive, with too many adjectives, and my stories can be slow to start, so I write reminders of this on Post It notes on my computer.

In saga, we often have a strong woman as the central character, whom the reader can empathise with from the first page. All readers can reach into their past and recall a strong woman, be that a nan or auntie, and to be able to connect them with a woman of real strength is a wonderful incentive to keep picking up your book. If it helps, write down a brief biography of your character before her story actually starts, so you have a really rounded sense of who she is.

Love it or hate it, it’s here to stay and authors really need to connect with it and use it to their advantage. I treat my author Facebook page like a community. Post regularly, interact, be curious, ask questions, and post giveaways, news, events, links to videos, favourite photos or anniversaries. The other day, I came across a wonderful photo of a group of apron-clad matriarchs gossiping on the doorstep. ‘What are they talking about?’ I asked. The feedback to that question was amazing, with people laughing and imagining the most creative and witty stories. Facebook especially gives you access to the mind of your reader and an insight to what makes them tick, as well as their hopes, fears and loves. Market researchers used to pay thousands for those kinds of insights.

I hope those tips are useful, I’d love to hear yours, Kate.

Thanks, Kate, for some excellent advice, I especially need to pay more attention to number three, bum glue! And onto your novel; The Allotments Girls is set during the Second World War, could you tell us a little about what it’s about?

It’s the story of a group of women working in the notorious Bryant & May match factory in Bow in wartime. My characters set up a Dig for Victory allotment in the grounds of the factory in a scheme inspired by a real-life group of intrepid gardeners who transformed bombsites into allotments. As the garden grows, it becomes a place of intrigue and deceit. An allotment is such a wonderful stage for drama. Serene and beautiful on the face of it, but dig deeper, and it can conceal all manner of secrets.

Although a wartime novel, Elsie’s story goes back to the late nineteenth century and is influenced by the Match Girls Strike of 1888. What made you want to explore this moment in history?

I read a wonderful book about the strike called Striking a Light by Louise Raw, which sets out a compelling argument to prove that the strikers weren’t downtrodden waif-like girls, led by a middle-class socialist, but tough, mainly Irish women who instigated and organised the strike themselves. Her descriptions of this tribe of women proudly marching to Westminster in their velvet hats, painted such a rich picture, I knew I had to weave this event into my novel.

All your novels are set around the Second World War era. What particularly draws you to that period of time and what research do you carry out to make your writing authentic?

I’m intrigued by it for so many reasons, but largely because it was the catalyst for enormous change in women’s lives. I still don’t think we’ve touched the surface of the contribution women made to wartime society. I’m not talking about munitions workers and war work, but in their homes and their neighbourhoods. Before the formation of the Welfare State and the institutionalisation of roles, each street had its own ‘auntie’ who was responsible for a plethora of roles, including helping to lay out the dead, birth the babies, act as a money lender, negotiate with the rent collector and take responsibility for the vulnerable in their community. They instinctively understood what all women knew back then – ‘There’s no shame in being poor.’ Before long, this generation will not be around to tell us first-hand of their experiences. Their stories will slide into the muddy soup of history, so I try to amass as many as I can.

Thank you again, Kate, for taking the time to come on the blog and we wish you every success with The Allotment Girls.

The Allotment Girls is an inspiring and heart-warming novel of wartime hardship, friendship and fortitude from Kate Thompson, author of the Secrets of the Sewing Bee. 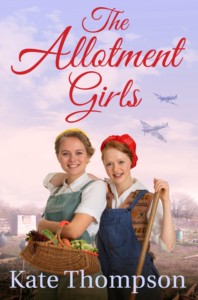 During the Second World War, life in the iconic Bryant & May match factory is grimy and tough. Annie, Rose, Pearl and Millie carry on making matches for the British Army, with bombs raining down around them.

Inspired by the Dig for Victory campaign, Annie persuades the owners to start Bryant & May allotment in the factory grounds. With plenty of sweat and toil, the girls eventually carve out a corner of the yard into a green plot full of life and colour.

In the darkest of times, the girls find their allotment a tranquil, happy escape. Using pierced dustbin lids to sieve through the shrapnel and debris, they bring about a powerful change, not just in the factory, but their own lives.

As the war rages on, the garden becomes a place of community, friendship – and deceit. As the garden thrives and grows, so do the girls’ secrets . . . 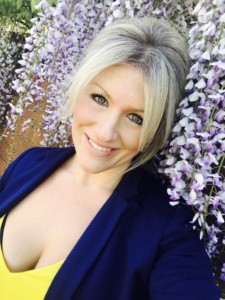 Lisa Hill writes contemporary romance with a light-hearted tone.  What interests her most is people, their interactions, emotions and relationships.  It’s probably why her career to date has been based in property; she confesses herself that she is ‘naturally curious’. Her first encounter with a romance author was chats over the garden wall between her father, Godfrey, and Mrs Cooper from the neighbouring village of Bisley.  It came as quite a surprise in later life to find that Mrs Cooper was in fact Jilly Cooper!  Lisa’s writing inspiration now comes from other Cotswolds’ authors including Jill Mansell and Katie Fforde.
Lisa is a graduate of the Romantic Novelists’ Association New Writers’ Scheme and attributes this supportive and informative scheme to her winning the Choc Lit Search for a Star competition 2016 with her debut novel Meet Me at Number Five.
Twitter
Facebook
Website
Share this
0 likes
Related Articles
2 Comments