I am excited today to welcome Vivien Brown to the RNA Blog talking about infertility and how she chose to weave it into her fiction. Vivien’s second novel, Five Unforgiveable Things, was released in July with Harper Impulse and here she talks about the struggles infertility presents, shares her own experience of IVF and what inspired her to write about the lows and highs of a journey so many others experience nowadays too… 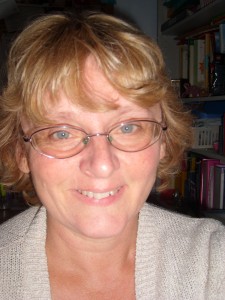 Infertility, it seems, is on the up. Not that it’s actually new. Millions of women throughout history have had problems conceiving a child. Miscarriages, ectopic pregnancies, still births and complications during delivery have always happened too, all devastating for those involved, and often (in the days before modern surgical techniques and anaesthetics) resulting in intense pain, catastrophic blood loss and even death. Scenes like that, along with big houses and titles passing to distant cousins because the lord and lady of the manor cannot produce an heir of their own, have featured in many a historical novel.

The difference nowadays is that we hear so much more about the nitty-gritty intricacies of having babies. And of not having babies! Women (and men too) are increasingly more willing to talk about infertility, to admit that they’re struggling, and to seek help. The internet is awash with true-life stories, infertility statistics and baby loss awareness groups. There are far more treatments and solutions available too, from drugs and ovulation apps to sperm and egg donation, surrogacy and adoption, with the most high-profile scientific breakthrough of course being IVF, celebrating its 40thanniversary this year.

As an ex-IVF patient myself, I felt drawn to infertility as an underlying theme for a novel. But as I sat down to plan my story it seemed initially that there were only really two possible outcomes when my main character Kate seeks treatment. Either the IVF would fail, with all the sadness that comes with that, or it would succeed and produce the baby she longed for, which to be honest wasn’t going to introduce much tension, was it?

No, I wanted to explore something more… the effects of infertility on a couple’s relationship, the financial strain when private treatment is the only option and – most of all – what happens if the outcome is unexpected, presenting the couple with a hugely important decision  that is going to impact on them and their family for many years to come?

I decided to set the IVF section of my novel in the late 1980s, when treatments were far less regulated, when success rates were lower and big risks were taken, the theory being that by implanting multiple embryos in the womb, and in particular in the womb of an older woman whose chances were so much lower, then, with luck, just one of them might make it. But what if the unthinkable happens and more than one hangs on in there? What if two, or three, or even four embryos start to grow? Can they all survive in good health to full term? Can the mother? Or should she let the doctors ‘reduce’ her pregnancy down to a safer number? This is the dilemma I wanted Kate to face as she heads towards creating a family far different from the one she had imagined.

I chose to tell Kate and Dan’s story over a period of forty years, starting on the day they met, but with alternate chapters set in the present day and focussing on their now adult offspring, so readers can see for themselves the lasting impact of the couple’s decisions and mistakes – not only on their own, but on their children’s, lives.

They say that one in seven couples can’t conceive without help. Having babies is not always easy. Maybe exploring the emotional ups and downs through fiction might help raise awareness and give a little ‘you’re not alone’ message to those affected.

Thanks, Vivien, for such an uplifting take on a subject which affects so many, women and men alike.

And onto your latest release, Five Unforgivable Things. 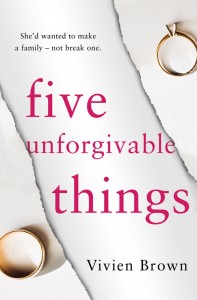 Almost thirty years ago, Kate’s dream came true. After years of struggling, she was finally pregnant following pioneering IVF. But the dream came at a cost. Neither Kate nor her husband, Dan, could have known the price that they would have to pay to fulfil their cherished wish of having their own family.

Now their daughter Natalie is getting married and is fulfilling her own dream of marrying her childhood sweetheart. Natalie knows she won’t be like most brides, in her wheelchair, but it’s the fact her father won’t be there to walk her down the aisle that breaks her heart.

Her siblings, Ollie, Beth and Jenny, gather around Natalie, but it isn’t just their father who is missing from their lives… as the secrets that have fractured the family rise to the surface, can they learn to forgive each other before it’s too late?

This sounds like such an interesting read. On first impression, it appears to be a struggle with IVF, but your novel spans generations with intriguing secrets. Tell us about the inspiration behind the plot and themes of the novel.

There are two interlocking themes – forgiveness and infertility – but the book is about life’s twists and turns too. Ultimately, it’s a novel about a family sticking together, trying to weather the storm, and finding forgiveness.We all make mistakes, but some are bigger and more far-reaching than others. The novel takes the reader on a long journey with my couple, pinpointing the five pivotal moments in their lives when if only they had chosen a different path or taken an alternative decision everything might have turned out very differently. It’s the ‘what if?’ or the ‘Sliding Doors’ moments every marriage faces at times. Who do you blame when things go wrong? Is loving each other enough to get you through the dark times? And just how much are you willing to forgive?

As for the infertility theme (and it is Kate’s inability to have a baby that sets off the whole chain of tragic events), I just want to add that I went through IVF myself five times in the late 1980s and was very lucky to give birth to healthy twin girls. Others (especially older women desperately having just one last try before they were deemed too old or the money ran out) weren’t so lucky, and ever since then I have watched with interest as new treatments came about and success rates improved. One day maybe every woman who wants a child will know that’s it’s not only possible, but that medical science can definitely provide one to order! Until that day, we need to do away with any feelings of shame or stigma attached to childlessness, but also respect each couple’s privacy and right to choose. When well-meaning friends and potential grandparents keep asking ‘When are you going to start a family?’ they are so often treading on some very private territory.

Your debut novel, Lily Alone, and Five Unforgivable Thingsare both psychological thrillers. Tell us a little about what you enjoy most about writing in this genre and what you find most challenging.

I always find it hard to pin a genre label on my novels. Yes, they have been called psychological thrillers but I think they lack the truly dark killer suspense and ‘woman in danger’ elements that those novels usually contain. There are some very tense moments in my stories, but I prefer to think of them as domestic dramas – dramatic, sometimes tragic, events happening within ordinary families, where the characters interact, make mistakes and harbour secrets.

In each novel, I am focussing on a specific family relationship. In Five Unforgivable Thingsit’s very much about a marriage and how the relationship between husband and wife changes over the years as some life-changing things are thrown at it, but it’s also about the close bonds between siblings. In Lily Alone, it was mothers and their children, exploring some very different mother-child relationships, from a struggling young mum who makes a terrible mistake and fears her toddler may be taken from her because of it, to an elderly and lonely woman reluctantly persuaded by her son and daughter-in-law to give up her beloved home, to the emotional hole left by an absent parent.

Writing about the difficult and tragic moments can be challenging, even heart breaking, but what better or more diverse theme can there be on which to base our fiction than the ever-changing dynamics within families, when each of us has them all around us in bucket-loads?!

What’s next for you? What are you currently writing / have coming up for release in 2019?

Staying with family ties, my work in progress looks at the relationship between two sisters and how it breaks when they both fall in love with the same man. Betrayal, rivalry, deception, loving each other, hating each other…

No news yet about publication but I am hopeful it will appear some time in 2019.

Thank you again, Vivien, for sharing your personal experiences today and how you have positively used them in your writing.

Vivien Brown lives in west London with her husband and two cats. She worked for many years in banking and accountancy, and then, after the birth of twin daughters, made a career switch and started working with young children, originally as a childminder but later in libraries and children’s centres, promoting the joys of reading and sharing books through story-times, book-based activities and parental training sessions. As Vivien Hampshire she has written many short stories for the women’s magazine market and a range of professional articles and book reviews for the nursery and childcare press, in addition to a ‘how to’ book based on her love of solving cryptic crosswords. Now a full time writer, working from home, Vivien is combining novel-writing and her continuing career in magazine short stories with her latest and most rewarding role as doting grandmother.